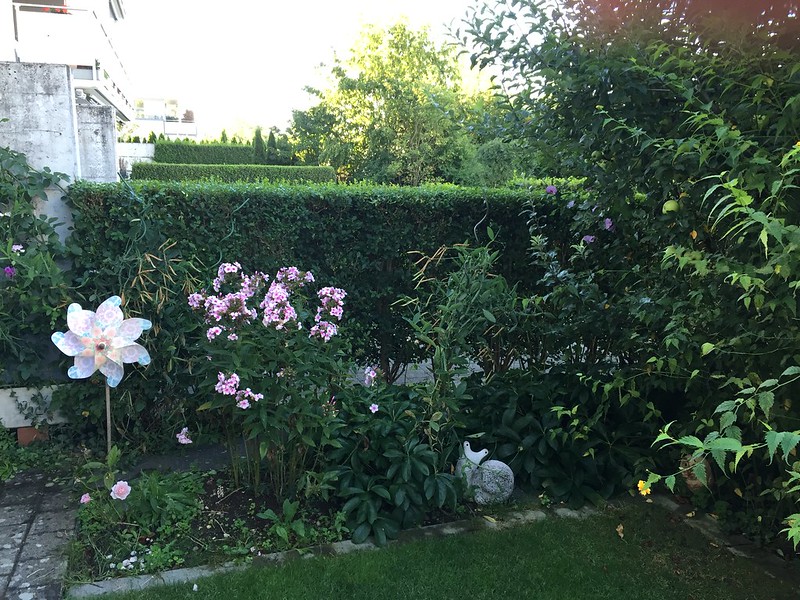 We have a gardener. He is programmed to arrive four times a year and the next visit is planned for end August, mainly to cut the hedges and clear the unwanted remains away. However, we noticed in the last couple of weeks that some of the neighbours had trimmed their hedges already. Our hedges were also looking something like flower power. Various climbing objects had stopped climbing and their flowers had become seed pods, brown and not very good to look at. I said nothing, just thought can we really wait so long.

Yesterday afternoon, it was a pleasant afternoon – not to hot, I saw Mr. Swiss armed with the hedge cutter make his way and began to attack our hedge forming a sharp straight line where it was a helter skelter of ups and downs, he was doing it all by himself. My hedge cutting days are long gone, but he continued bravely overcoming the problems of a golden oldie hedge cutter. I think he only intended to do the hedge seen in the photo, but he got above himself, beame euphorius and did it all. I was glad and so was he, our hedge was now as tidy as the neighbour’s hedges and we now longer had to be the odd ones out. You know how it is in life, you cannot be the people with the unkempt hedge. People will begin to talk, you become an outcast, and worst of all are the sideways glances from the others and the shaking of their heads. You have to belong, be one of the masses, and this means the hedge has to conform with the rest.

Luckily my No. 1 son arrived home from work and could help his father, who was now feeling his back more than usual, to clear away the remants of the hedge cutting exercise. We are now the proud owners of a hedge, that looks like all of the others – see photo.

What was I doing whilst my husband was carving this masterpiece. I was blogging of course, now that is something that none of the other neighbours do. I have only ever seen one neighbour with a computer outside on the porch and he was a male. Of course I do not observe my neighbours and what they do, just keep an eye on them to make sure they are not doing something that we should do – like cutting hedges?

Otherwise the day continued as normal and not once did Mr. Swiss complain that his back was aching, which was an exception. Perhaps hedge cutting is healthy. I took a few photos in the garden, and nearly fell in the act which would have been a disaster, mainly because I was carrying the camera which could have been damaged. We have hospitals to repair our damage to body parts, but cameras have to be sent to their headquarters for repairs and are not usually insured, although my new lens has a 3 year gurantee.

Today is  day of cleaning so I am off, time is going. No shopping to do, Mr. Swiss will go for me. My No 1 son announced yesterday, that today he is on short time. I had not arranged a midday meal with him. No big problem, but I planned mushroom risotto and he does not eat mushrooms, one of the few foods he does not eat (autistic problem). Quick decision, and the mushrooms will now be fried separately to accompany the rice and Mr. Swiss will buy a couple of pieces of chicken parts to cook with the meal, that is the result of us both being experts in logistic.

Have a good day/night everyone, enjoy it, and do not foget cut your hedges if they do not look as good as the neighbours.