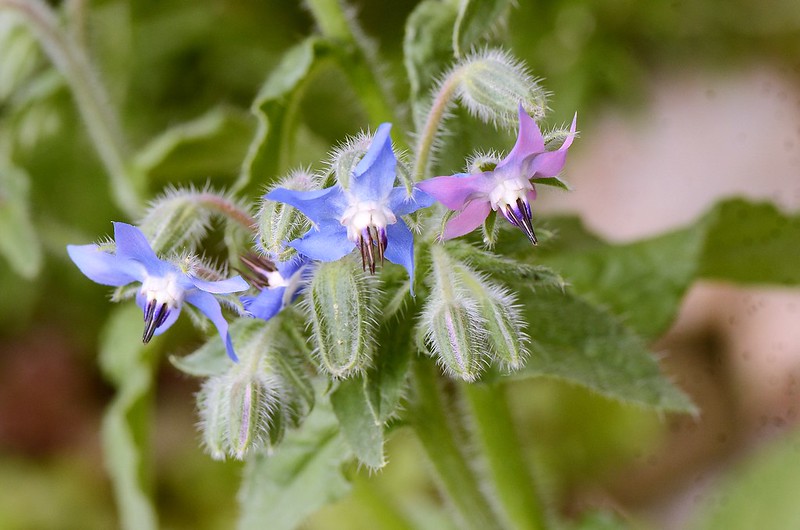 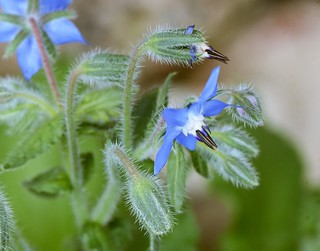 One of my favourites and they do not like having their photo taken. They always bend their faces downwards and I am not very good at getting on my knees to take photos as I have problems standing up again. However with a little friendly persuasion I managed to get them looking in a comfortable direction for my camera.

I bought a packet of seeds a few years ago, spread them around the garden and since I have at least 2-3 times a year new borage plants growing. They seed up permanentely and once sown, they seem to remain forever. They are not a problem, easy to remove if you no longer want them, and they can grow quite tall and strong. Last year was a mild winter and one or two survived and were the first to flower in Spring. With my new lens I have at last captured their true blue colour and now and again they throw up a dark pink, just to confuse you. 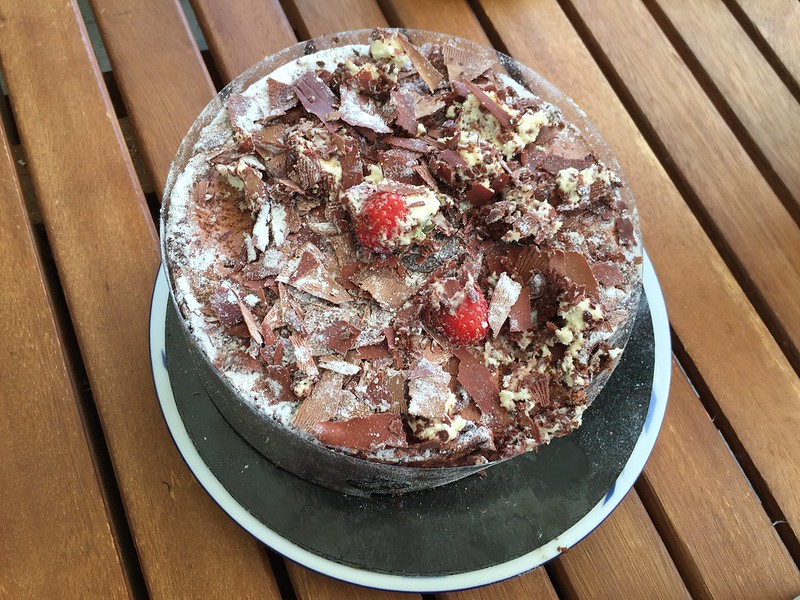 This was/is one of those perfect black forest cherry cakes that you can either make yourself or buy in a shop. I did not make this one. Mr. Swiss purchased it because we were expecting visitors. Everything was perfect until I heard an exclamation from the kitchen. “Oh  etc. etc” the rest is left to the imagination. Luckily this perfect black forest cake had not yet been unpacked and was still covered by its protective cover.

I realised that something had happened when I saw Mr. Swiss with a special flattening knife attacking the surface of the cake. Yes, he had dropped it and according to Murphy’s law and the gravitational pull, it had landed with the top side down, during its fall, meaning that the perfect decorative points of the cream topping were no longer points and the strawberry decoration had moved.

I decided to leave him to it, I was convinced he had everything under control and who am I to add to the problem. It was when I entered the kitchen to make final preparations to serve lunch that I realised there was more to this malheur than would meet the eye. My clean kitchen floor showed traces of chocolate which had somehow dislodged itself from the top of the cake, but I would emphasise the cake never actually touched the floor, but a black forest topping is not something stable. It reacts to dropping movements and even some pieces may be dislodged. The perfection of serving a black forest cake to visitors was now in jeopardy. However, we soon had everything under control.

The top of the black forest cake had perhaps lost its perfection, but was now an example of abstract painting, something completely different, a new design. In the meanwhile I swept the chocolate shavings together, although Mr. Swiss found I should slow down my motions, as the chocolate was begininning to smear on the floor. No problem, I had everything under control. I had a soft damp mop in my cleaing chamber, ready for such ermergencies. It is the mop I use every morning for my stone floors and I found it is a good idea to keep it ready for emergencies that could, might and will happen during the day.

Whilst Mr. Swiss was still shaking his head at my efforts to sweep the remainders of the chocolate together I was thinking ahead. I stayed cool, as always. I soon surprised him with my efficiency in producing the damp mop and sweeping everything together again. The panic was over, we were now two golden oldies that nothing brings out of their concept. 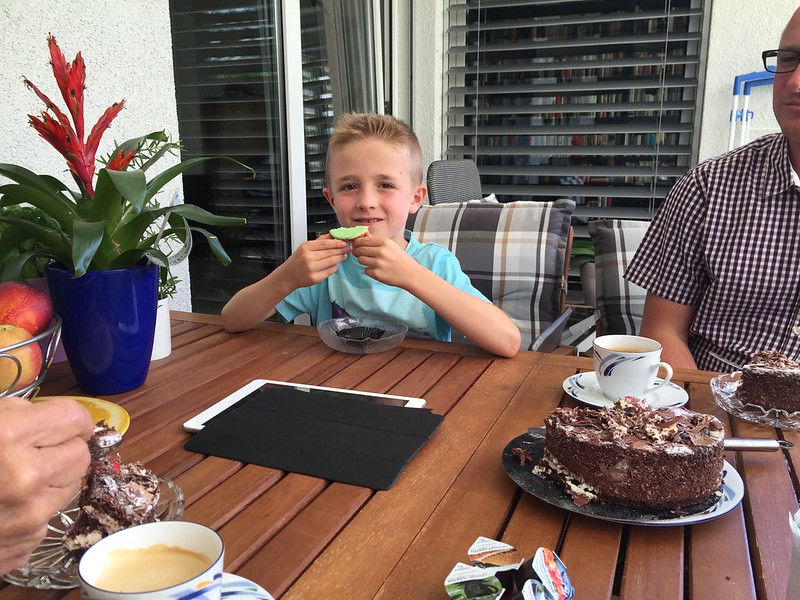 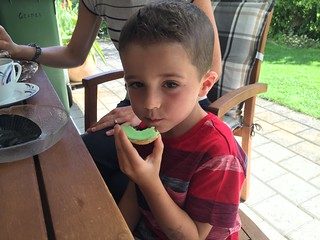 In the meanwhile two of our guests found something more interesting to eat, although they decided a piece of black forest cake would serve its purpose as a second course.

It was a pleasant afternoon, the weather was perfect and we had met our neighbours again who moved away some years ago. These are the moments in life to savour and enjoy and seeing the two young men again, the youngest being a baby when he left, was the perfection of the day. There are times when not everything has to be perfect and a falling cake does not ruin the day, just causes a little unwanted excitement. 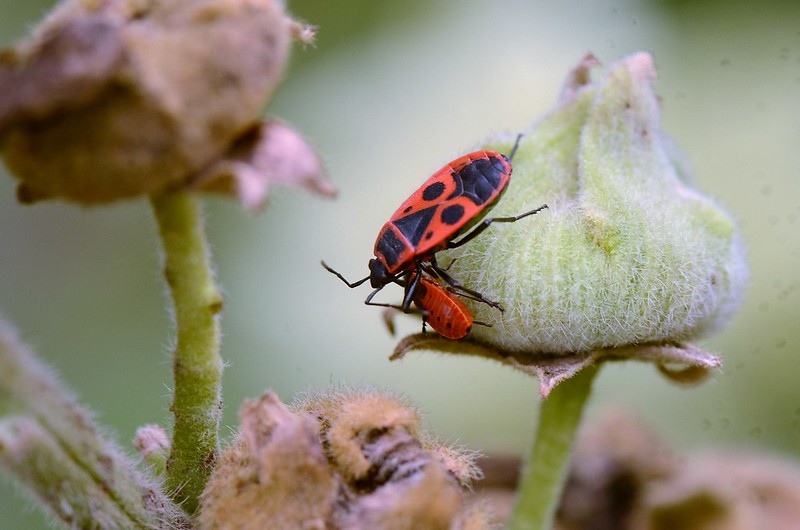 It seems the third generation of fire bugs is arriving. This is probably mum and child making an attempt to gather whatever the seed pod of a hollyhock has to offer. I love these little guys. They usually wander in masses in the garden, but do no great damage. They love eating seeds, and who needs the seeds. I do not plant them, the just make their own way into the ground, and some plants produce 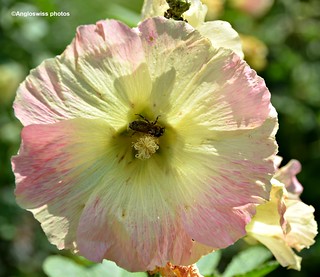 too many, so you can be glad when they do not all make it. I originally had 3 hollyhock plants.

Over the years they spread everywhere and the original plant colour disappeared. I could only get the yellow variety, but would have loved the very dark red sort. For some reason, only known to nature, they would often appear with tinged red edges, although the basic colour remains yellow. They make a nice border to the garden.

I had another late morning this morning. Not really late, but I seem to have more stress since being retired, although it is all my own fault. My bed was so comfortable it hugged me and would not let me go.

It is Sunday, so no big deal really. I just have my routine in the morning and like to get on with it before moving on. Looks like a sunny day today, not too hot, but just right for me. Yesterday we had a monsoon all day, but at least we do not have to bother with giving the garden water today.

I think the Olympic games are coming to an end today. I must admit I only watched by accident and had no real interest. In my younger days I remember it being a place where the amateurs could show their best. Now it is reserved for the professionals with the money to be able to afford the best trainers, best equipment and best everything. Mr. Swiss watched the final of the football yesterday evening which was between Brasil and Germany, Brasil winning. I asked him if they submitted their normal international teams, and he answered “of couse”.  I seem to have an old fashioned idea of Olympics.

Now to the work, although no rush. I have one of those meals to cook that does it all on its own, just have to set it up.

Have a nice Sunday wherever you are, or perhaps you even now have a Monday according to your position over the date line. I have 9.00 Sunday morning and should really get going – there is a lonely hoover waiting for my attention – no not quite, it has now adopted Mr. Swiss, so I am on the waiting list.