Hope you all slept well. I did, too well actually. I had a little problem falling asleep, but eventually fell into a coma and was awakened by the alarm this morning. I know I do not need an alarm, I am a golden oldie and we had a ceremonial burning of alarm clocks when we reached retirement age, but a little organisation must be. You cannot stay in bed until lunchtime, it would be a waste. There are things to do like visiting other blogs, answering comments on your own blog and even writing a blog.

You mean things to do like houswork? Yes, that as well, but that is only a side dish, the main meal is doing what you want to do. 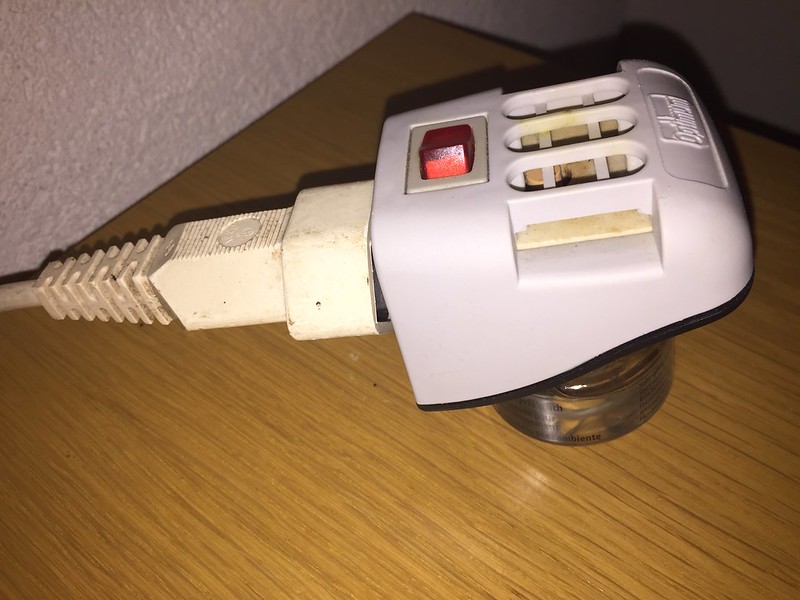 One of the reasons for my undisturbed quiet sleep is this contraption above. It has saved many a night that could resemble a battlefield, with dive bombers buzzing over your head winging their way to a nice juicy supply of blood. You fill it with some sort of anti mosquito liquid and plug it into the electricity. I do not know how it functions, but it ensures a mosquito free night, as they avoid the smell and perhaps even the secret signals it sends, which cannot be heard by the human ear. We have the safe mosquitos in Switzerland, but living near the River, it does not get better. It is better than the continuous buzz buzz of a mosquito rubbing its back legs, or whatever it does to make this monotonous tone. Mummy lays her eggs in the river. They thrive and hatch and go for a little swim. The problem begins is when they discover they have wings and decide to leave the river and start a family. I mean all creatures are entitled to reproducing themselves, it is the way of nature. There are, however, some insects that are programmed to develop their future using warmblooded other creatures as a help on the way.

Who does not know the soft buzzing sound of one of these mini winged vampires during the night whilst you want to sleep. They are on the search for fresh blood. They hover during the day on the ceiling or might be outside your bedroom window waiting for their cue. As soon as night falls and we switch on a few lights, they enter and are ready to pounce. They know humans sleep at night, they know they have so much blood flowing through their arteries, that there is something to spare. And so they wait and eventually go on a discovery trip to your body. I am sure some of us have seen them sitting on an arm and happily fillng their reproductive organs, or whatever, with a fresh warm supply of blood to help the babies develop into nice strong mosquitos, who will also be searching for fresh blood when they grow into big mosquitos.

The problem is when you want to sleep and drift away into the land of dreams or whatever. it is then they embark on a buzzy flight. You can hear them coming and most annoying is when they wing their way near the ear. Then, suddenly there is silence, they have gone – no way, they are sitting on your arm or whatever piece of flesh might be available, sinking the blood suction device into the skin and are in 7th heaven, on a trip, this is better than LSD for a mosquito. Suddenly there is an irritation, you swipe it with your hand and …. yes you hear it buzzing again. Its feeding has been disturbed, it has escaped, but mummy mosquito has no big problem, there is plenty of skin left.

Eventually you drift off to a troubled sleep, dreaming of vampires and blood banks only to be awakened in the morning by an irritation and a growing red point on the mosquito targetted area of your skin. This grows to a large red point, a red bump, but no problem. Mummy’s eggs are nicely developing due to your unvolutary blood donation, and eventually the bump disappears to a mere memory of a disurbed August-September night amongst the pregnant mummy mosquitos. Let us just think of it as nature taking its course. I mean there must be a purpose for everything in the world. My dad even had malaria during his service at the end of the war in Italy, but they probably had the mega mosquitos, the professionals. Luckily in Switzerland we only seem to get the apprentices.

Time to go, I have wasted enough time on the computer. Just a few sips of my tea, remove the breakfast stains from the table and I am off. Am cooking a good old basic meal of boiled bacon, Swiss sausage accomanied by cooked red cabbage and potato today, so will prep the cabbage and let it cook with some added red wine until lunchtime. In between I will fill in the time with a little cleaning session, interrupted by taking a few photos. After all I am a golden oldie and do what I want to do (mostly) and not what I have to do (unfortunately).