“The gardeners have arrived.”

“Hallo Mrs. Angloswiss. He is not working with us at the moment.”

“Oh, that’s a shame, he was so good. I was sure he spoke to my plants and knew exactly what they require.”

“I know, that sort of gardener no longer exists, he could just look at a seed and say if it would survive or not. Anything special to do Mrs. Angloswiss, or just the usual?”

“Just the usual. The hedges need cutting again, and perhaps a few weeds growing here and there.”

“Yes, we can see that. What about the remainders of the Spring bulbs, shall we cut them back.” 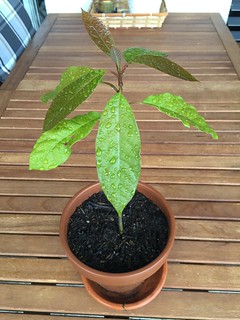 “Oh, no just leave them to disappear all by theirselves. Ambrose always said not to interfere too much with nature, and let it take its course. Just one thing Joe, I planted a second avocado in the garden. Actually I almost lost it, because I couldn’t remember where I had put it. I have one already growing in a pot, but I thought I would put the second pit in the garden to see how it would survive. It is over there on the edge of the flower bed. Just leave it where it is to see what will happen.”

“Are you sure, it doesn’t look very strong and will probably not survive the Winter.”

“You might be right. Perhaps you could ask Ambrose if you see him, what he thinks.”

“We probably will. We will ask him when we visit him tomorrow.”

“Yes, he is in hospital. Had  a heart attack last week, and will probably no longer be able to work.”

“Give him my best wishes when you see him. My garden will not be the same without his guiding hands I am sure.”

“Yes, well me and Fred will be doing our best.”

“Sorry, no offence meant, but Ambrose just became part of my garden over the years. I remember when he saw my first apple tree that I grew from a seed. All the other gardeners said it would not survive and I could forget about it bearing apples. Ambrose looked at the small sapling and re-assured me it would find its way in the garden and last year I harvested over 100 apples.”

“Yes, we know. Ambrose seemed to grow with the plants and feel with them. We really do miss him. And now to the work.”

The gardeners worked well and when they left in the evening everything was perfect, except for one small item. Mrs. Angloswiss searched everywhere. She was not sure where it was, but she could not find her new arrival, the avocado she planted in the garden. There was a space where the stalk and its few leaves were. She the realised what had happened. Avocados were not a common appearance is the climate where she lived and the gardeners probably thought it was just one of the other weeds. She was sad, her avocado was no longer. She had watched it grow from the beginnings in an egg cup where she placed it in some water. First of all the root fought its way through the pit, and then the first leaves arrived. She took the chance and planted it in the garden, where it actually got lost until she found it growing in her herbs. She then found a safe place next to the rose bush, and now it was gone. “If only Ambrose had been here” she thought “he would have  recognised my avocado and rescued it, and now either Joe or Fred have thrown it amongst the other weeds, that the< piled into their truck before they left.”

She was sorry that her avocado had disappeared, but she still had the other one in a pot.

The next day she had a surprise and Ambrose was standing in her garden. Gardeners always arrive by the back entrance, so they do not have to walk through her home with their muddy shoes.

“Hello Ambrose, what a surprise. I though you was in hospital recovering from a heart attack.”

“Yes that’s right Mrs. Angloswiss, but they have now let me go home. I just wanted to see how things were in your garden before leaving. You apple tree is growing nicely, it will be a good harvest this year. And what do we have here. Well look at that, an avocado tree. Looks like your other tree in the pot will have a little brother.”

“But Ambrose Joe and Fred mistook my avocado for a weed and removed it.”

“Doesn’t look like it to me Ma’am, growing strong and tall like the other one. Lovely little specimen arn’t you?”

And Mrs. Anglswiss was sure that her missing avocado which had now mysteriously appeared in the garden again, shook it leaves – or was it the wind. She was glad it had survived the attack of Joe and Fred. Thank goodness Ambrose had looked in.

“Thankyou Ambrose, I am sure my avocado appreciates your visit. Ambrose, Ambrose” she called, but he was not longer there. It then began to rain, looked like a storm was brewing, there were a few thunder claps and some lightening bolts, but her avocado pit stood its ground and soaked up the rain.”

The next day Mrs. Angloswiss was reading the local newspaper and the obituaries as usual, but she startled. How come that Mr. Ambrose Muggly (her gardener) had passed away from the results of a heart attack yesterday morning, when he was in her garden yesterday afternoon. She cast a glance at her avocado and notice it had made another two leaves since yesterday. 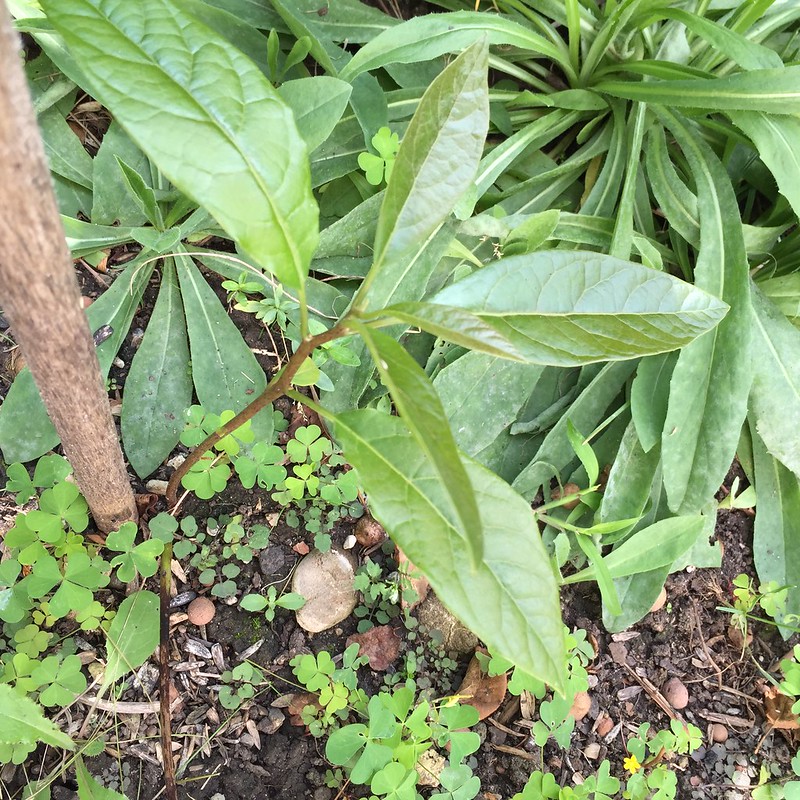 Based a little on the truth. I did plant a second avocado pit in my garden (see photo), but forgot where it was, and suddenly found it in my herb bed. I replanted it again and it disappeared after the gardeners had tidied up my garden. I found it again two days ago, there must have been a remainder in the garden or……….