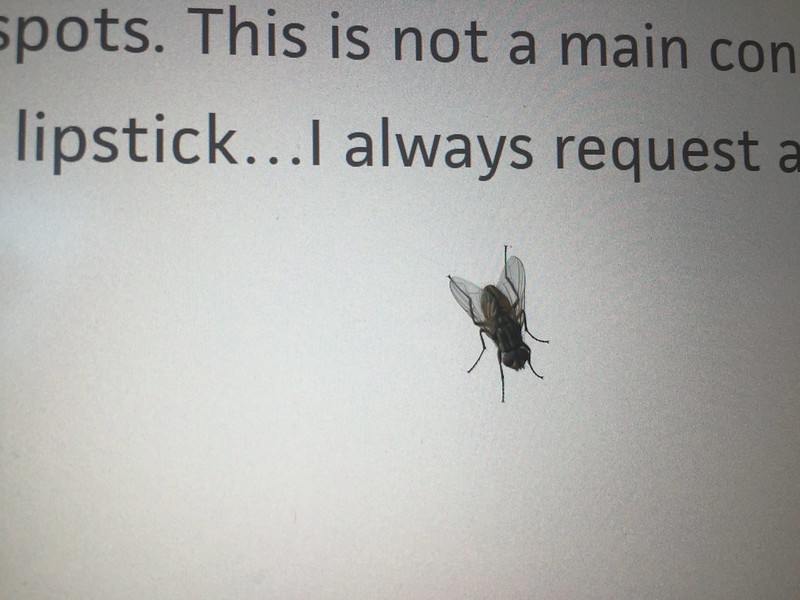 This fly did not say good morning, it arrived yesterday evening just before I was closing my computer for the day. Being an experimental type of person, not wanting to disregard all photographic opportunities I took a photo with my phone camera. I was sure he would not stay around long enough for a full perfect DSLR photo where I have to made adjustments to the depth, and ISO specifications. No animals were injured in the process of this operation, fortunately, I did not want to have to clean away the fly corpse stains from my computer screen afterwards.  It must have been quite a literate fly to land on the middle of a blog site. I quite like the way his body is illuminated by the background showing details of his wings and little fly body.

My No. 1 son just said goodbye and left us to be seen again in the evening when he returns. We have yet another holiday in our Kanton of Solothurn. Switzerland is still a divided country when it comes to religion, which has it advantages. Due to a guy called Zwingli, with a little assistance from a German guy called Luther, the Swiss reform church took over from the Roman catholic church in some places, but not everywhere. Our canton of Solothurn stayed loyal and it is a catholic canton, Mr. Swiss still being one of the members of the Swiss Reform church, although I would add more by name than anything else.

So today the catholic parts of Switzerland, including our canton, are on holiday. It is Asumption Day (the english translation of the German word would be Maria Ascension “Mariahimmelfahrt” – just to put you in the picture). In my pre golden oldie days I was a happy person on these catholic holidays as I had a free day and all the non catholic areas of Switzerland had to work. However, as cucumstances were a little different in our household, Mr. Swiss working in a non-catholic area in the Kanton of Bern, he did not have a holiday. I used this to my advantage and volunteered to work in the office on the catholic holidays. I was an export clerk and the export world does not take holidays. I could compensate this day at a more suitable date when Mr. Swiss and I would take it together, or add it to another holiday.

These days are now a figment of past life, and every day is a holiday, although not so religious. We are golden oldies and celebrate the festivals as they appear.My son is now on his way to Zürich by train for a Macdonalds meal on the Bahnhofstrasse and a look at the developments in the record shops amongst other things.

Due to golden oldie problems, Mr. Swiss and I got a little confused when shopping for the holiday. We bought two different meals for Saturday lunch, meaning we have too much to eat. I cooked a chicken on Saturday and wondered why I had a whole bag of parsley in the fridge which I usually apply to cooked vegetable, such a carrots. The reason soon became clear when I also discovered 3 pork chops and realised they were actually meant for Saturday lunch with carrots. There were also two packs of bacon, a Waadlander Saucisson (smoked sausage) and 1 Kg of green beans for Monday lunch as the shops are closed today.

Being a multi-tasking housewife with solid logistic education, I applied my versatility and re-arranged. Today it will be pork chops with carrots. Tomorrow might be a potato Rösti with diced bacon, to use up the potatoes and some of the bacon.   Or perhaps the saucisson will be cooked and the bacon can wait until the week-end as bacon can be kept in the fridge for some time to stay fresh.

Mr. Swiss and I still do not know why we bought two meals for one day but we are sure it has something to do with age and forgetfulness. We are still discussing whos age and whos forgetfulness.

Anyhow no panic, I have plenty of time, no important jobs to do today. I cleaned all the windows and blinds last week which is usually a sort of Monday job (just the windows, blinds once a year) and so it will be sun, fun and nothing to do, although nothing to do is boring. I like to do something, I think there is a medical name for it, but have forgotten what it is called. Some sort of syndrome probably.

I must now move on, I have been chatting enough with all my faithfull followers. Mr. Swiss finds I chat too much in any case. Have fun, and if you are bored then write a blog or something. Of course, you can also knit or write a book. 🙂