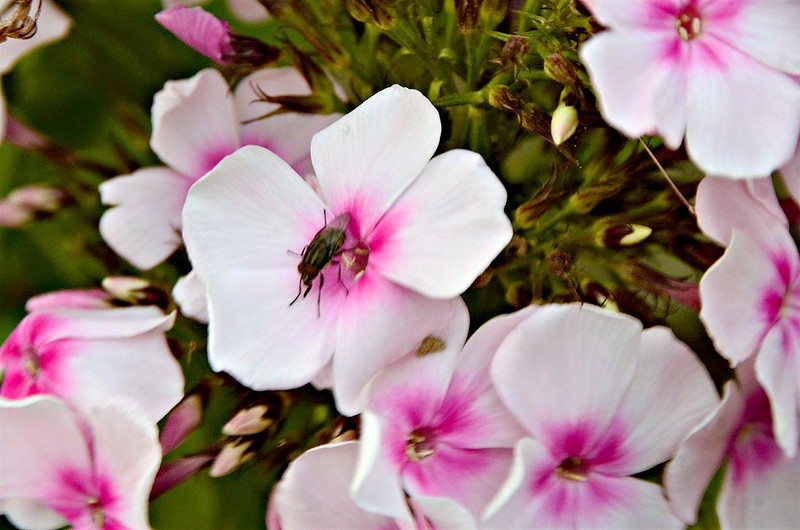 Took a walk around the garden, shot a few photos and this little fellow decided to say hello as he was taking a rest on one of my phlox flowers. 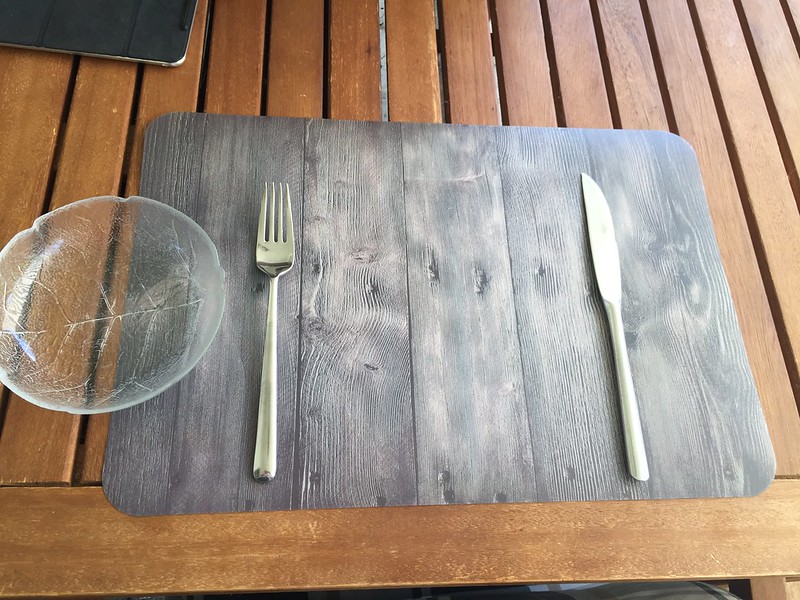 The Swiss can be complicated at times, although Mr. Swiss disagrees and finds the english are more complicated.  Who me? Never. Just the simple way I lay the table has an mistake, something to do with driving on the wrong side of the road or walking with your partner on the wrong side. Note the knife. I mean a knife is a knife, but no, a knife is to be placed in the right position with the blade side facing the fork. No problem. I let him change it, it is a free country and we can all do what we want to do. And there is nothing worse than a lonely fork.

Of course the salad dish is on the left next to the fork as a logical connection to eating the salad. We all, most of us (even including complicated me) eat our salad only with the fork. Problems can arise if spaghetti is served. You eat the spaghetti with a fork and large spoon. In this case even the Swiss admit that the fork is now on the right side and the spoon on the left. What does complicated Mrs. Angloswiss do in this case. She puts the salad dish on the right, because that is where the fork is now. However, a disagreement arises Mr. Swiss finding that the salad dish should remain on the lefthand side of the plate, as always. We did exchange a few words about this develpment, but I decided to give up. There are more important things to discuss other than table arrangements.

The problem can develop if you take a walk with your swiss partner, and you are british. I tend to walk on the left side away from the traffic, but apparently this is complicated in Switzerland and the women walk on the right side of the man. Up to now I have not been pushed into the street under a moving car, so I suppose it must be safe. I confronted Mr. Swiss with this problem, and he did say that if there is traffic on the road, then a dispense is issued and the woman walks on the left side.

My older son is lefthanded. By the way yesterday was the day to honour lefthanded people, althogh neither he nor I noticed this. He is autistic, and for some unknown reason autistic people tend to be left handed. It is a way of life for No. 1 son and it never really bothered me that when he drew an object it always came from the opposite direction. No. 2 son is also lefthanded, but not quite. He is ambidextrous, meaning equal use of the right and lefthand. This is not easier but even more complicated.

We “normal” righthanders, even lefthanders,  know how to handle our writing, drawing, and even tying shoe laces. The ambidextrous have to think it over and often arrive at a complicated solution, although everything works well eventually. I remember when No. 2 son would draw as a kid. The whole table was covered with varius colured pencils. This was because he neither drew with his right or lefthand, but drew with the hand that was nearest to the pencil colour he wanted. It was a co-ordination of the right and lefthand side of the paper, but he managed to reach a good result.

Every mother has to show her children how to tie the shoe strings. No big problem, one of the proud duties of motherhood. However try to show your ambidextrous offspring how to do it when he is still undecided which hand to apply. This can become a very complicated operation, especially if the school teacher tells you that your son has learning problems. You visit the school psychiatrist to clear things up and the school psychiatrist tells you your son is bored in school, because he can do it all already. Everything he is learning, he can already do it, and there is absolutely no problem. Amibidextrous? The only problem being to know which hand to apply. She made a few tests, which confirmed her results and added if ever my son wanted to he could visit her any time – to relieve the boredom?

I do not think he did visit her as the computer moved in at home in the meanwhile and he was then exploring the possibilities of shooting down aircraft and painting landscapes with a Wizzball. He also won prize of the year in the commecial school, so it seems being ambidextrous is not so bad after all.

When Albert  Einstein discoverd E=mc2 everyone probably thought he  was getting complicated again, and when Stepen Hawkins decided to find out where the black holes originated, people shook their heads. Somewhere on this planet there will be somebody that discovers what a stroke of genius Mrs. Angloswiss has by placing the spoon on the left, and the salad bowl on the right with the fork, to simplify eating the salad with the spaghetti, but she is english and the british have problems with the righthand and lefthand side of life. They even drive on the wrong side of the road.

Daily Prompt: Complicated, a matter of how you look at it 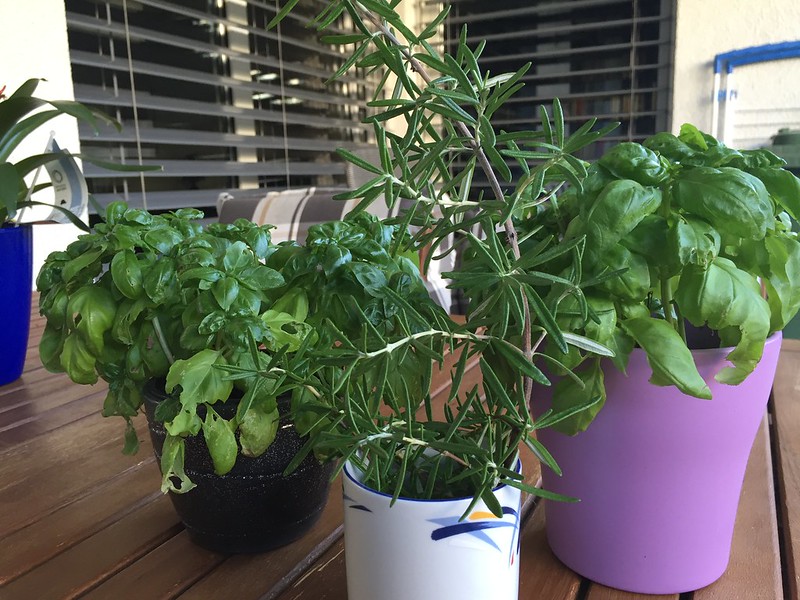 Just another Sunday morning at the Angloswiss villa. I had an accident in the garden yesterday. Not too serious, and to alleviate your concern, I am still in one piece, but unfortunately my Rosemary plant, which has now spread to a threatening size, lost a twig. I was busy cutting down my origano, as this was having a battle with the rosemary to see who could take over the most territory and during the fight there was a scream and I was left holding a twig of rosemary in my hand. The origano stalks are now in the garbage, but called out in a chorus “we will return” so it will probably be the same crime scene next year.

I already have two small pots of basil on the porch table. I did not risk putting them into the garden, as I noticed the slugs were sharpening their 200 teeth when they saw them. However, even the basil is not safe from invaders. For some time I notice strange holes appearing in the leaves, but no traces of basil eating monsters with pointed vampire like teeth or claws that rip or wearing t-shirts saying “death to all basil plants”. There were no slugs on my porch table as they do not climb such heights. Spiders only eat living, breathing objects, but I eventually came to the conclusion it was the dreaded earwigs. Luckily the earwig hungry season is now finished. They have disappeared, leaving behind a trail of destruction on my basil.

Luckily the basil is still producting leaves for various Italian dishes and my rosemary twig is now resting in a cup of water, that might (a big might with qustion mark) produce roots and I can plant it again.

In the meanwhile I am typing this piece with the sounds of the Gustav Mahler symphony No. 8 in the background Symphony of a thousand which Mr. Swiss is dvd-ing or whatever. He is a Mahler fan, although I am not so sure that it is a suitable accompaniment to my breakfast as the thousand seem to be singing at the top of their voices, including a boys choir, and the orchestra is occupying the seats left empty. It was a TV broadcast from the Lucern Festival which always takes place in Summer. The name originates because Mahler seemed to need a thousand people to perform it. It’s sounds are now filling my home at 8.30 a.m.

Otherwise it looks like a nice summer day today. Time to relax and enjoy the daily chores of cleaning and cooking., blogging, photography and who knows what might happen.

I will now leave you as I have a hungarian goulasch to prepare and I like it slow cooking style which is very pleasant. With tearful eyes I slice 3-4 onions and fry them with the cut beef, sprinkle with tons of paprika, spice it all up, pour in some red wine and let is cook for about 3 hours. In the meanwhile I can forget it and do more important things, like ……