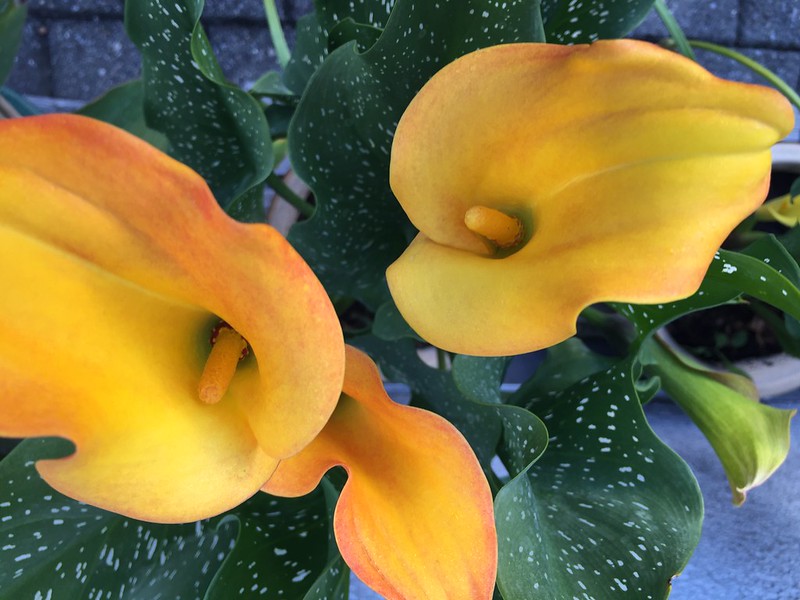 And they are still flowering, and even trying to revert to their original colour of orange, but not quite. These are a slow burner in the garden during the summer and never seem to tire of flowering until the beginning of September. I have had this plant for at least 5 years and it begins to grow in its pot every late Spring. During the Winter I keep it in the cool cellar. 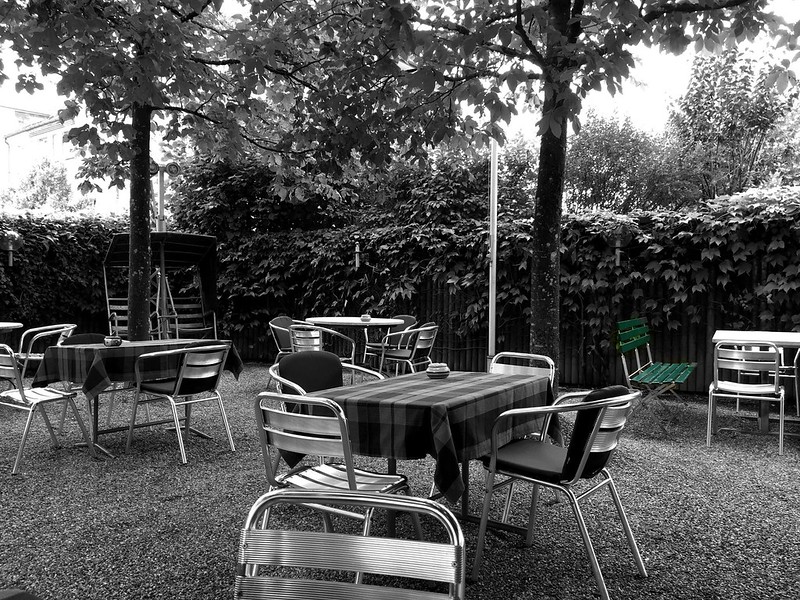 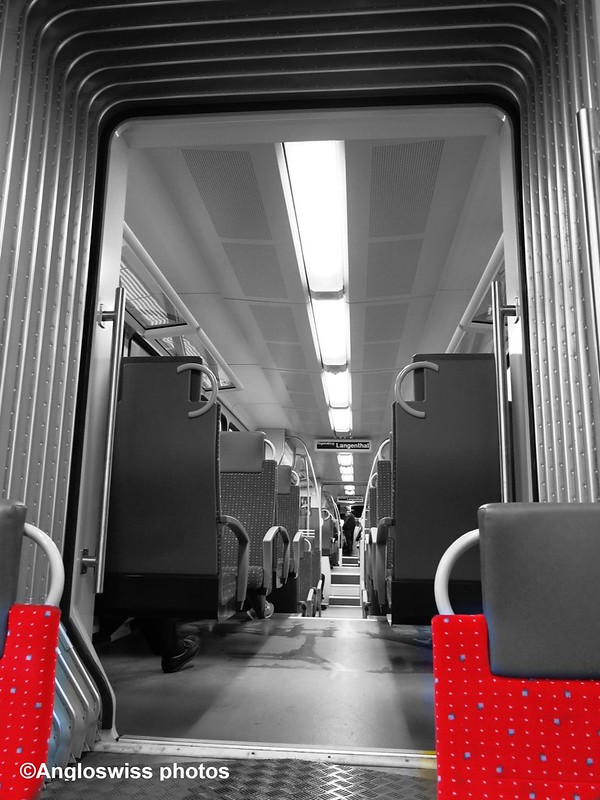 Inside our local road train, Switzerland 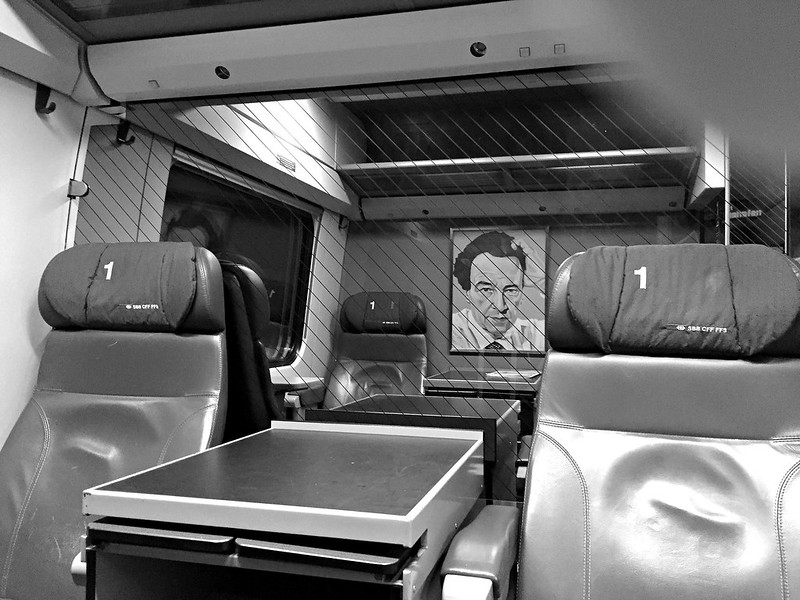 First Class in the train to Zürich – glass panel between the carriages. I took the photo on my journey to Zürich Airport. 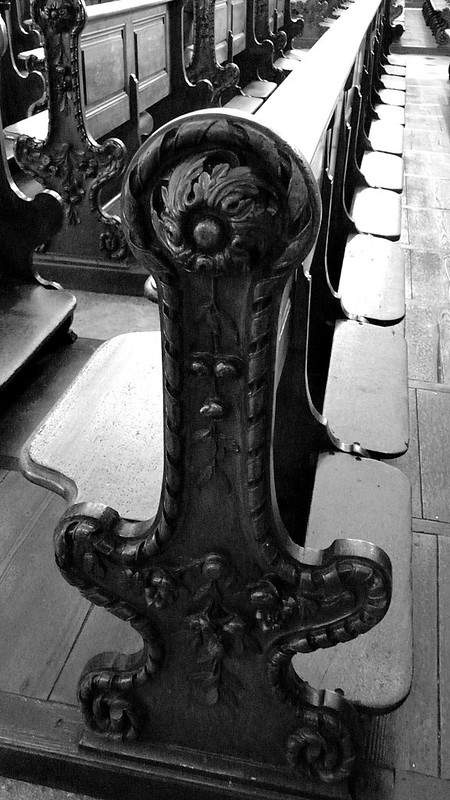 Side view of the pews in St. Urs cathedral, Solothurn, Switzerland

Cee’s Black and White Photo Challenge: Any Seating including Tables and Chairs 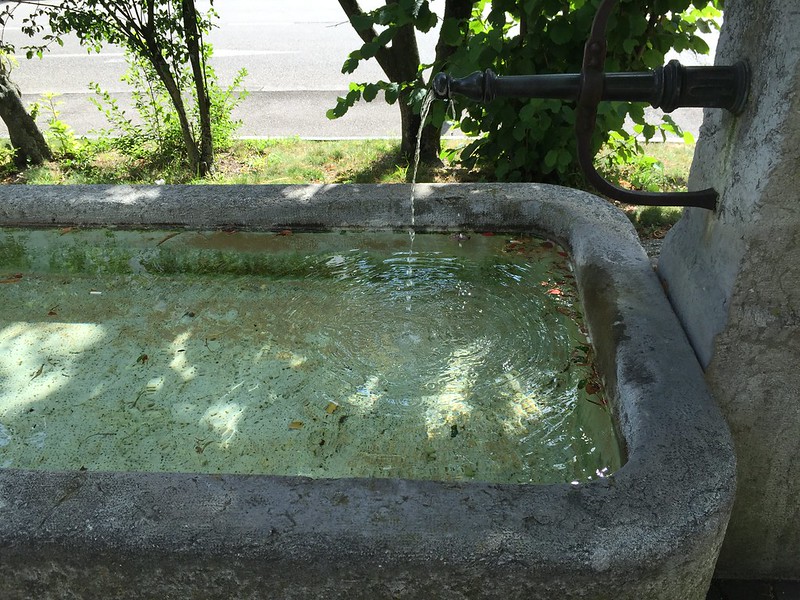 What a coincidence. I did not have a clue what to write about a surface, because I did not have any surfaces waiting to be written about. I was in town and happened to see this drinking trough opposite where my physio therapy rooms were. What could be better. I took a photo, or two or three and now I have a surface of water. I was not in the middle of town, so I wonder what the purpose of this water was. It would be very useful for a thirsty dog, if the dog was a St. Bernhard or an alsation, but a poodle or terrier would have problems reaching the water.

I remember my youngest son once took a bath fully clothed in one of our eleven fountains in town, but that was in the late hours of Saturday evening, after one of those student events when he was young and adventurous. I think some sort of liquid celebration had taken place, but he assured me that he did not fall alone in the fountain as one of his colleagues fell in with him.  I do not think that he intentionally wanted to discover what was below the surface of the fountain. This was many years ago, but as a mother these things tend to remain. He actually had his student christening in this fountain, but that is a student ceremony and everything organised where the victim is lead in a procession to the fountain dressed in his bathing trunks wearing a dressing gown. A few words are spoken, the last being “I now christen you …..” according to the name chosen for the student, and then they are pushed into the fountain wearing only the bathing trunks according to the ceremony.  This is a volutary looking beneath the surface of course. 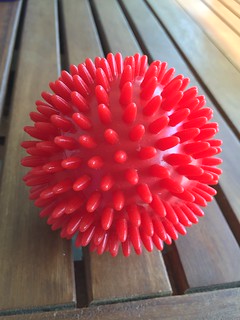 This afternoon I had one of my fantastic therapy hours, where I realised there are parts of my body that no longer function as they should and where I discovered parts of my joints that I did not really know existed. They are still aching now. There was a small problem, but these things are sent to test our pain levels I suppose.

Another souvenir I collected was this ball. As you can see it has a very tricky surface and is made of a hard plastic. Another toy to play with when I am writing my blog on the computer, or perhaps just reading a book. The idea is that I roll it around with my foot to stimulate the feelings that I should have. I will have to put it away in a safe place as my cat is already looking at it with a feeling that she now has a new exercise ball. I really quite like these therapy lessons as I can do all the exercises whilst sitting and doing something else at the same time, like writing a blog.

One surface that stays in my memory is that of Tower Bridge in London. It was evening many years ago and  I was staying a week in London. My friend and I took a walk in the docklands area of London and as we were crossing the bridge I fell. I do not know why this happened even today, but I arrived at the local hospital in the late evening where they confirmed I had broken my arm. Yes, Tower Bridge has a very hard surface, especially if you protect your head with you arm when falling on it.

Our local surfaces are softer, usually earth, but they also hurt. When falling be careful what you grip to help stop the fall. In my case it was an electric fence to stop the horses escaping which did not help very much in breaking my fall because I very quickly let go. No horses were hurt in the making of my fall. I just could not stand up again afterwards.

So enough on the theroy of surface connections, the afternoon is finishing and I have other thing to write.

Daily Prompt: Staying on the Surface 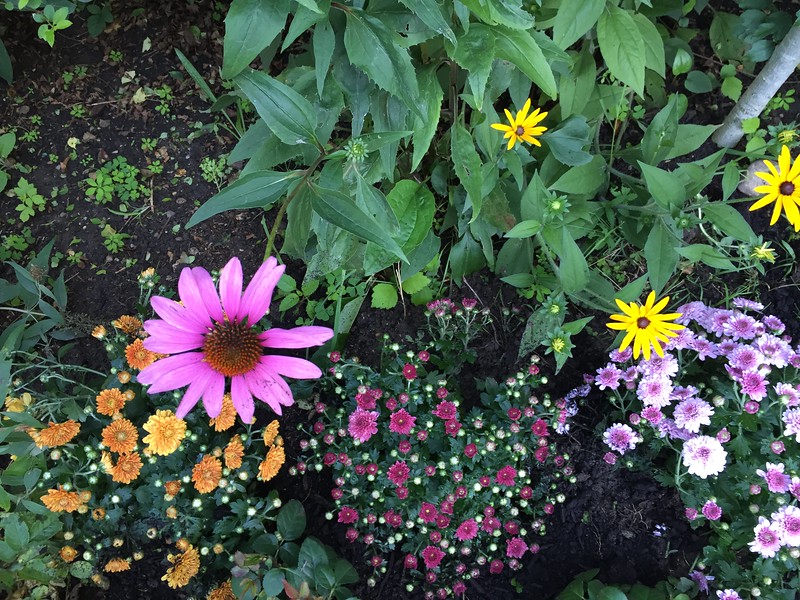 Today is a nice sunny day, a bit cool but pleasant. Yesterday I had a fit of energy overcome me, and so I decided to go into action. I had bought some mums (chrysanthemums) at the local supermarket at a very reasonable price. I was going to put them on my table in the front garden, but decided I would take the risk of planting them in the back garden, hoping that they would not die of the shock. The only thing suffering from the shock of planting them is me, because I overestimated by energy, but I held on to the bitter end.

Funny how you get these ideas, are sure they are feasable and after the first five minutes notice you should have let it be. However, I persevered. First of all I had to clear the space and dig, which is not so easy when you know that getting down on your knees is the worst you can do, as standing up again would not be possible. I discovered that the earth was not as soft as I expected and so I turned on the hose. I then discovered the strength failed me to turn it off completely, so I left it trickling into the garden until I was ready to switch it off. Eventually I put the plants in the garden and then realised they needed more earth to surround them.

I had a bag of fresh, good earth which was unfortunately 40 Kg heavy, so it was not possible to lift it to the right place. I cut the bag open, making a mess on the porch, and fished out the earth pot by pot and carried it over to the flower bed. Why do things not always turn out as you imagine? However, I was eventually finished, gave the earth another shower of water and at last managed to turn  the hose off, after cutting out the water supply. I was proud of myself, but realised I should not have done it. Mr. Swiss did shake his head now and again. He would have helped, but where I have my problems, he has his as well, especially in the region of the back. Yes we are two golden oldies spending the last of our energy. 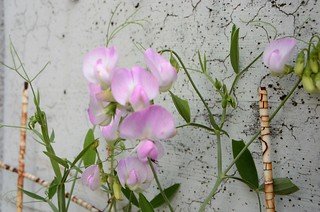 My new everlasting sweet peas are also doing well. I threw some seeds in my box last year and this year they are growing nicely. The mother plant was more into intensive crimson, but the seeds are more in the pastel way of things.

This morning I am thinking of cleaning one of the blinds at the front of the appartment. No big problem, I reckon about 20 minutes. I can shower it down, being ground floor and just wipe it over and dry it. Afterwards clean the window. There are three windows altogether, but I do not intend to do all at once. Yes, I seem to be a succour for punishment.

This afternoon I have a physio therapy session, so let us hope it will help me to recover.

I hear the call of the Dyson and his friend the mop, so must go. I also have spaghetti to cook. A woman’s work is never done, especially if she also has a computer which needs attention from time to time and if she is also a blogger, then multi tasking is called for.

Enjoy the day everyone, take it easy and avoid cleaning blinds and putting plants in the garden, but you can attend to your computer, that is the least of the problems.