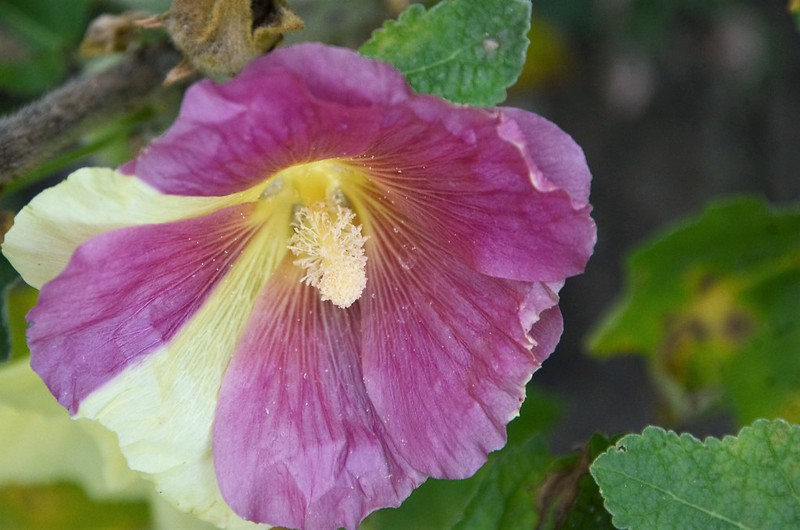 Strange things are happening in my garden. I took a photographic walk today, not expecting anything new and suddenly this hollyhock caught my attention amongst all the other yellow hollyhocks. Even the other flowers on this plant were yellow, just one or two arrived in two colours. I have never seen that happen before. Sometimes nature has a strange way of showing herself. I was really completely surprised by this colour and of course had to fix it with my camera.

Mr. Swiss is a very good painter. He starts with a sheet of white paper and eventually has a work of art, at least I think so. His trees look like trees, the flowers also like flowers. It makes no difference what it is, he can do it. He mainly paints aquarell style. I was fascinated by this talent because I come from a family of non-painters. I remember my dad once painted the inside of our front door in brown. No problem you would think, but this door became a problem. The paint refused to dry, it remained all its life a sticky, tacky door. I think he must have bought the paint from one of those blokes that had a cheap lot to sell. It looked OK, but it was better if you did not touch it as you had problems being separated from it afterwards. Dad did not paint a lot, he was more the wallpaper type as was the custom in england.

No matter if you lived in a slum, with an outside toilet and no bathroom, you still made sure that you decorated regularly, but painting was not involved. Generally you left the old wall paper on the wall and papered over it with the new wall paper, which was the quickest method. However, after ten years of wallpapering every 2-3 years, the rooms grew smaller and so it was necessary to scrape the old paper away. I think we did it with coating the wall with paper and scraping. I do remember helping dad as a kid to scrap it off now and again. We kids loved destructive work, especially if we knew we were helping. I remember one of the first impressions Mr. Swiss had from my family when he got to know them in England, was that the main subject of conversation was how they were decorating their  home, with what colours and patterns on the wallpaper. My uncle Harry was quite good at that, especially when contemporary style was discovered. Everything he had in his council house was contemporary. No, do not ask me what it is, I just knew that he had contemporary.

We had quite a few colour schemes on our walls. My favourite was the one we had in the kitchen once, and then he even painted our old cupboard to match.I think this cupboard was a prewar construction. 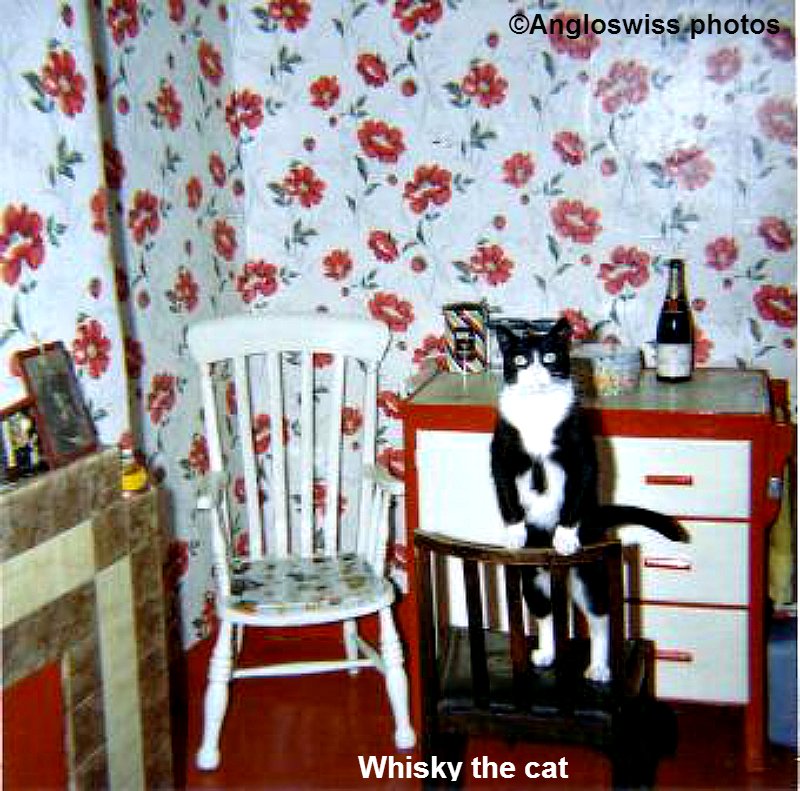 I even have a photo of this wonder work. Even our cat, Whisky, decided to get into the act. I am sure we made sure he was black and white to fit in with the colour scheme. Note the large chair in the corner. Dad also painted this white. I believe it was a requisite from my grandfather. Dad could be quite artistic in his painting and I am sure if he had been given an easel and palette he might have invented a new style and put Salvador Dali and all the other imaginative surrealists in the shade. Dad was also colour blind, which probably encouraged his style. The cat was also colour blind thank goodness.

Note the floral wallpaper corresponding with the painted furniture. For the first time I notice that the floor is also red. We also did the floors ourself. None of that fancy wood or tiles, it was all natural so-called oilcloth which you could buy cheap “down the lane”.  Now and again mum would even clean it, I think once a year on Good Friday, do not ask me why. I never went into the details of East End cockney family life. Probably her mother did it that way before her.

Note the corner of the fire place which was the most modern construction we had. I remember it being fitted into the house. Growing up we had an open fire coupled with an oven and the house had no electricity when it was built and gas was also quite a new invention in 1884. As time passed we had a gas cooker fitted, but as there was no room in our kitchen, we had it put outside on the platform at the end of the stair well, meaning that mum had to climb steps to get to it. Yes, she fell down the steps now and again, but so was life in the East End.  I think the construction of the fire place arrived because there was a new law passed about keeping the air cleaner in London. I grew up through smog and fog. As you can see we had blocked this fire place, as we used some sort of paraffin burner for heating and did not really light a fire with coal.

Today we do not paint, have things painted. Switzerland is not such a do-it-yourself country I noticed. The Swiss have never heard of wallpaper it seems. 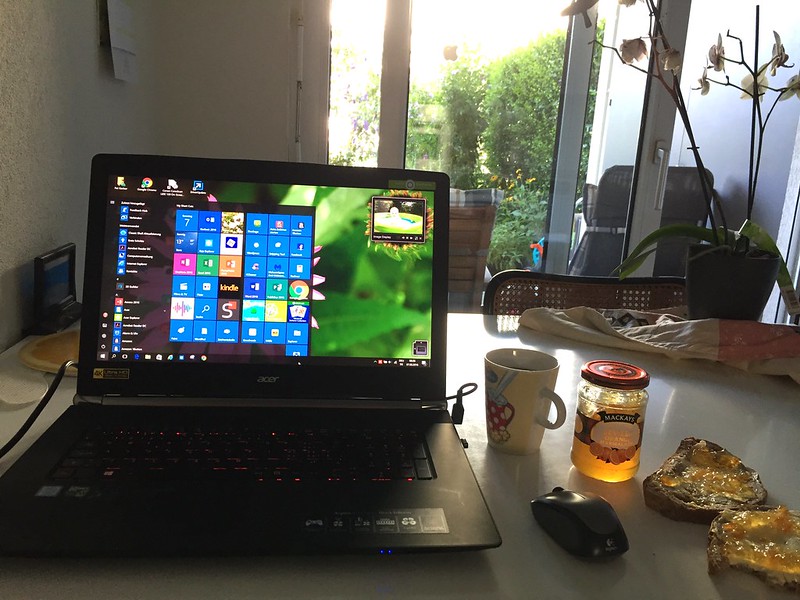 Sunday morning and all is well with the world. Why complain: just because the new and improved Windows 10 has mixed my screen configuration around – no. It is all there, just in the wrong places and my set password for FB in no longer there. I have to add it manually, more finger exercise on the keyboard. I think I fixed it this morning. Otherwise my WordPress shortcuts have the old orange colour, which I never really liked. That is also now blue again so am keping my cyber fingers crossed that it stays that way. This naturally all reverts to the same old question “why repair something if it is not broken?”.

On the other hand I am here as usual, checked through the events of the night and the reader to make sure I do not miss anything. Looks like it will be a nice sunny day today, not too hot. Mr. Swiss is not happy. It seems that our beloved feline used his recycling tray frequently during the night and Mr. Swiss is now emptying it. Just a normal morning at home. I slept quite well, too well, I woke for a few minutes around 6.00 a.m. and began recharging my bedside mobile telephone. I fell asleep again to be woken by my mobile telephone alarm. This was good that I sleep well, on the other hand, I was surprised. Despite all my health problems and immovability I can still sleep. I then decided as I am not going anywhere and have anything special to do, I could lay in bed a little longer.

Google keeps reminding me that the Olympic games are now taking place with their daily cartoons. I am not really a keen follower of sport, except for the odd football match (with the round ball) and so I am not so interested. I remember the olden days when the olympics were really something big. They were all amateur sports people taking part hoping for successfor their investments in time and money. Today even that seems to be a question of money  and not longer a question of hard work. Sponsoring has become a big thing, and participants are now advertisements. I never did have interest in watching the games but Mr. Swiss even no longer bothers so much. The whole thing is just a show for me.

I should move on, there is a background noise of a vacuum cleaner which is disturbing my concentration and reminding me that I should also participate. Together we are strong and can conquer the daily chores.

And now I can see from my window that my hibiscus is flowering so must go and take a few photos. The light is right, in the shade, and they do not last very long – closing again in the late afternoon. Have fun and enjoy the day.