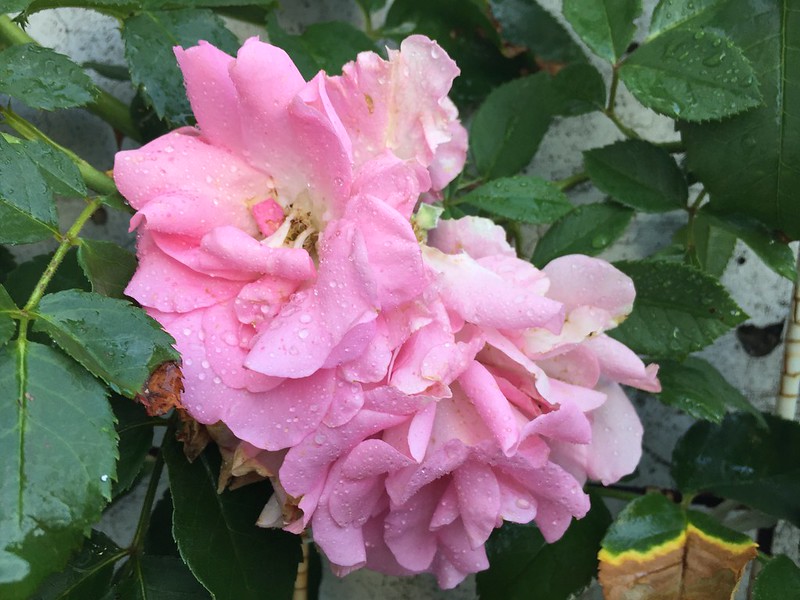 Yesterday was such a dismal, dull day, I needed something to brighten up my morning. Mr. Swiss was busy spraying the garden and I did a tour of inspection and found one of the last roses of summer, still flowering. It is a climbing rose, so I let it climb on a wall. Roses always look their best when they have water drops on them – from the hose.

Yesterday was greyer than grey. It was also colder, which lead me to wear a short armed t-shirt over my summer top. It was also a day of cleaning. I do not know why I decided on Tuesday as the main cleaning day, but by late afternoon my bathroom, doors and kitchen were again gleaming.

Today I am allowed out again. I have not seen the outside world since last Friday and have been imprisoned in my appartment and garden, although I felt no longing to mix with people. I began to write a shopping list, because something came to my attention that I should write down lest I forget it. The problem was I had already forgotten what it was when I was ready to begin my list. One of the problems of becoming a golden oldie. 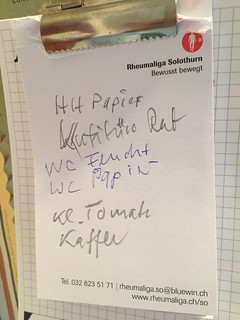 Just a moment, Mr. Swiss to the rescue.

“Where?”, sort of erroneously thinking he could beam it over to my phone. This was not the case. He still believes in the written style of things. However, undaunted I found the list pinned onto the kitchen wall and begann to read. First of all it was in German which is actually not a big problem for me, but when it is handwritten it can become complicated. It seems that Pat (me) needs jam, our toilet items are now running out and we need coffee and small tomatoes. Everything is possible, but I am still not sure if he has included what I wanted to buy and fogot what it was. I had a problem with the first item as HH Papier (HH paper) was an unknown abbreviation to me, but it has now been explained. It is Haushaltspapier (household paper – he means that roll of paper we use for everything hanging in the kitchen). Yes, shopping lists are written in a secret language. At least I can read his handwriting which is very good, as I cannot read my own.

Oh, WordPress has now returned. I was convinced it had disowned me. I am accustomed to my telephone sending messages continuously from WordPress showing who has liked, who has commented. Mr. Swiss often complains about the noise signals that sound continuously, because I usually have it on full volume. During the night I put it on flight mode, as I do not want my sleep to be disturbed. I have the phone next to my bed as it also serves as a light to lead my way for any noctural expeditions I have to undertake when nature calls. I did not switch it off yesterday, because nothing was happening, it had lost its WordPress voice. It was obviously a WordPress problem, because everything else was working on my phone.

This morning I had checked my iPad in the early morning for any new events, and was afterwards quietly dozing thinking I should actually be leaving my bed and my telephone sent me a signal, a familiar WordPress signal. I took a glance, and yes, it is alive again. I am connected. I did register a complaint with WordPress which they seemed to ignore. Now things are back to normal and as I walk through the shelves in the supermarket my telephone will be sending its messages as usual.

I must go, my daily boring life of a housewife is calling. Who knows what might happen today, remember the postman only rings twice and we might be out when he comes. Enjoy your day or night as it may be and see you some time this afternoon/morning, when we are back online. The Windows update has not yet arrived, but I can always use my Apple computer as an alternative.