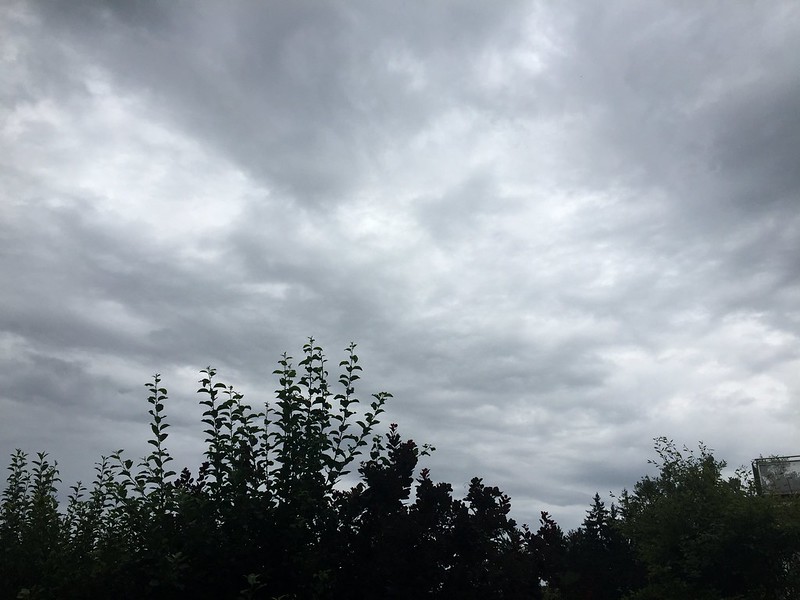 You would think with a sky like that this morning, it would rain, but it had not rained all night and this morning everything was dry in the garden and so what did Mr. Swiss do? He made one of those spontaneous daredevil decisions, armed himself with the hose and gave the plants to drink. I was still relaxing in bed thinking about joining the real world, when I heard the platching of water outside the window. It must be something like living next to the Niagara Falls.  I decided to rise and make my way to the kitchen.

In the meanwhle I took a photo of the grey sky and a few other things when, yes, it began to rain. We now have a semi monsoon, but you can never have enough water on the garden. Before the rains came I took a short walk, with my camera of course, through the garden. Took a photo of a spider, again, and then my camera refused to do anything more. Of course, you do have to change the battery, or whatever it is called, when you notice it is on its last legs. Luckily I always have a reserve, you never know. I was finished with my photographs when I noticed a new arrival in the garden. A spider, much bigger than the other one, had suspended itself from the porch roof and spun a web. He had settled in and so another photo was necessary. He had nicely placed himself next to my super hibiscus, so I took a photo of spider with hibiscus. 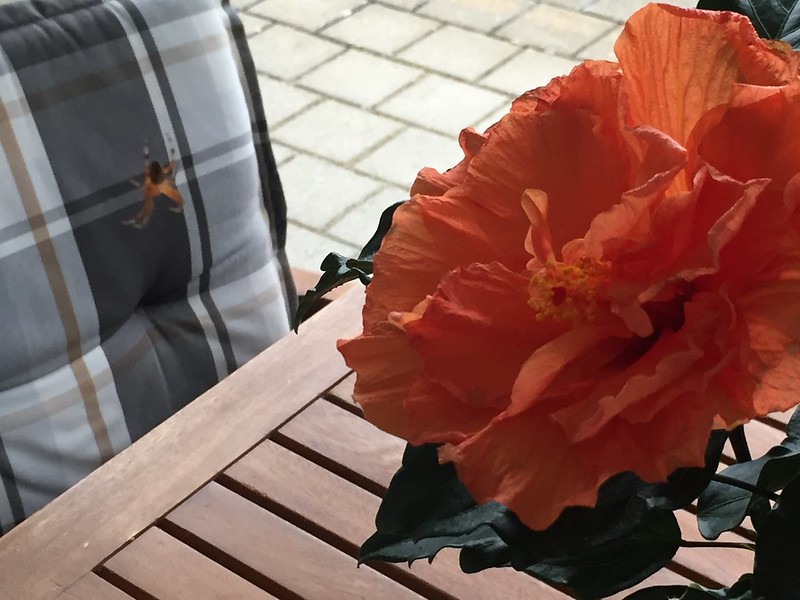 Not a prize winning photo, as it was with my iPhone and you cannot choose you focus so well. It was either the spider or the flower, both do not happen. I did ask the spider to move closer, but he ignored me, just hanging around. I changed my position around the table, but to no avail. Some time later I will upload my super DSLR photos and see if they are better.

In the meanwhile we are now all awake and ready to go. Mr. Swiss has decided to make an excursion to his rehearsal room for a drum practice, and will also call in at the drug store for some tablets, which he forgot to get from his doctor. It seems both of us have moments of forgetfulness lately. Are they golden oldie moments? Yes, most probably. I have now got used to writing everything on my phone memory lately. Writing notes on paper does not work, as I cannot read my own handwriting and the phone even reminds you, if you remember to tell it to remind you.

And now to hobble around the appartment to see what should be done. I actually enjoy my daily chores, since returning from my England journey. Something must have been missing when I was away.

Enjoy your Sundays, take it easy, and remember the computer never sleeps, unless you put it into a sleep mode, which I never do. I either switch it completely off or on. Switching off the computer is almost like a holiday. I even put it in another room. It has its place on a shelf, with my other computer(s). So is the life of a cyber golden oldie. And I always have my iPad or iPhone if anything really needs my attention 🙂