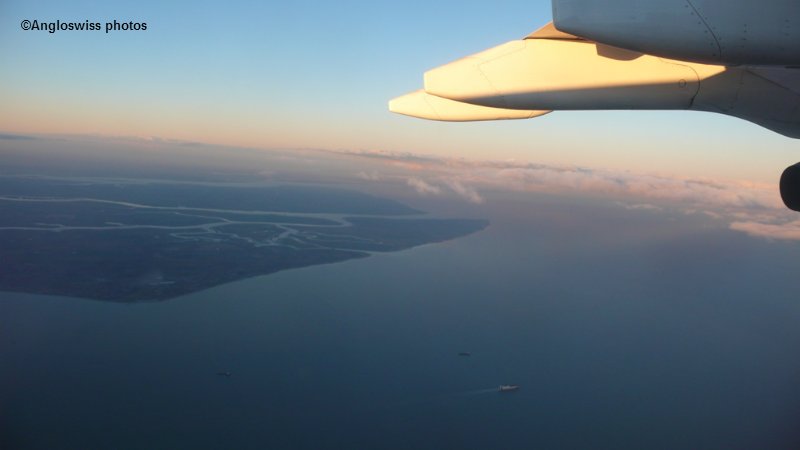 When approaching or leaving the british Isles, England, one of the first or last views you have is the coastline of England.

I was born on an island, known as the British Isles, although I only realised it when I was a kid and we had family holidays to the sea which was not so far away. To make it even more isolated, we even spent some holidays on the Isle of Wight, which is another island off the southern coast of the island of Great Britain, again surrounded by water but much smaller. The British were always island people and anything else were “the others”. They had their own way of life and their own way of thinking. and were quite happy until they decided to join Europe After many years, at the end of June 2016 to be exact, they decided  it was not their sort of thing and decided to leave.  Unfortunately the government have not yet realised this and are still trying to remember how it was when they were an island. To complicate the situation, a road tunnel was built between Great Britain and Europe some time ago and they are not sure whether to fill it up again or let it be, in case Great Britain changed their mind and want to return to Europe.

At the age of 20 I left the British island to live in Europe. There was no channel tunnel at this time and a flight in 1964 was too expensive, so I had to use a boat to cross the stretch of water separating England to the rest. It only usually took an hour, subject to the weather. I remember a fateful crossing that took three hours due to storms across the english channel. This was when I had already married a Swiss and had children of my own. I had to barf, and my two step children had to barf, known as sea sickness. It was a French ship.  Only my autistic son seemed to enjoy the sound of glasses breaking as they were swept to the ground by the ships movements and Mr. Swiss was unperturbed, and had no problem. He was shapshape, ready to go and felt no ill effects.He spent the journey talking to a young french lady who also did not have to barf. Had I been in a better condition he would not have had a chance to talk to this young lady, but due to the feelings I had of crawling into a corner somewhere and dying, it did not bother me, I had other problems. After leaving the ship for the train to London and feeling much better, I believe we exchanged  few words on the situation, but this was long ago. The barfers amongst us were glad to have firm ground beneath our feet again.

I have been living in Swizerland for the past 50 years. We are an island without water. In the middle of Europe, the part left over after all the other countries were established. France, Germany, Austria and Italy were formed, as well as Liechtenstein and there were many mountains and lakes left in the middle which no-one really wanted, so the Swiss took it over. The inhabitants  of this country known as Helvetia, or Switzerland, share four languages amongst themselves, mostly in dialect form so the surrounding countries left them to do their own thing as no-one really understood them. Do not underestimate the Swiss, they might have no ocean or water surrounding them, but they discovered something much better: banks. People deposited their money in Switzerland bcause it was  a safe thing. Of course some of the money did tend to get wet now and again, it was washed to keep it nice and clean.

Today the countries surrounding Switzerland are now Europe (with the exception of Great Britain, who are still not sure about the whole thing). Switzerland is an island, doing their own thing, but following the ideas of Europe now and again for the sake of fun.

The trouble with this world of ours is that there are too many islands, but at least we have interesting places to go on holiday. At the moment we have the European football cup being played, including Great Britain and Switzerland (who have already lost and have been sent home). Sport speaks all languages it seems. I am now supporting Iceland. It is an island in the middle of the sea, having more Winter than summer and playing football in halls in Winter beause the outdoor conditions of snow and ice are not suitable. Its population is less than the town of Zürich, but they can play football. Because there are so few of them they grew up together playing the game. They are now heading for the semi finals if they win the next match and I would love to see them win the cup. At the moment the island is half empty as many of the inhabitants are in Paris to cheer on their football team.

My favourite island is mine, the one I can share with my computer, or a book. Now and again I share it with Mr. Swiss if he is not listening to music, reading a book or concentrating on his computer.

Daily Prompt: The Islands in my Life

6 thoughts on “Daily Prompt: The Islands in my life”