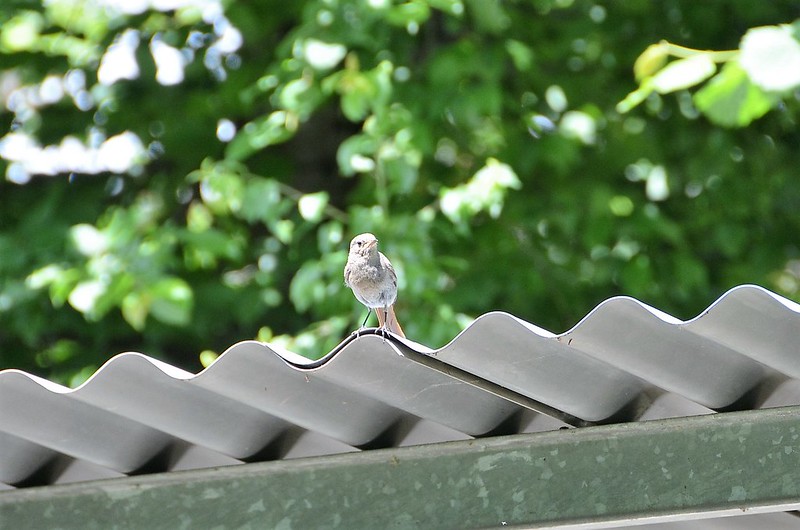 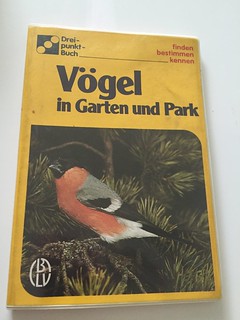 My bird friend returned again yesterday. She visits often and I always see her from my window when I am on the computer. I always leave a handful of birdfood on the porch for her, which disappears, although I never see her eating. In the meanwhile Mr. Swiss produced a small booklet, Birds in Garden and Park,  which has been in the family for years and we found her. It seems to be a phoenicurus ochruros, which in english would be the black redstart, although there is a similar bird known as phoenicurus phoenicurus which is the common redstart. They both look alike, but according to a photo where the chicks are being fed by the mother it looks like the black redstart. The male is more black and the female less colourful.  I even got a recording of their song on internet, although this example does more a subdued croak than sing. She is quite inconspicuous with her greyish feather and the red tail feathers. According to my research in internet, it is a younger version of the black redstart. 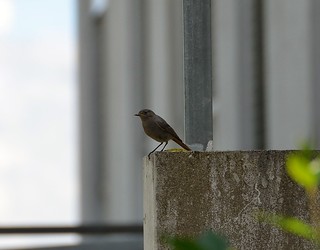 I am not an bird expert, but I like to know who visits my garden. She is quite timid and usually perches a distance away when she sees me, so I have to get my super DSLR camera with the zoom lens for a good photo. Growing up in London, I only really recognised sparrows and pigeons. Living in the country we get all sorts of visitors on wings and I like to be able to recognise them.

Sparrows are everywhere, the scavangers of the neighbourhood. You have to be careful where you spread the food as they are the first to arrive and grab it all for themselves.

Yesterday I ventured out on my first walk for a long time. I discovered my walking ability is now reduced considerably, but I took my time. I even manage to climb 70 steep steps on my own from the river bank to the top of the slope. Naturally I did it all with help from my new super walking cane with the jungle pattern. I could hold onto the banister with my left hand and support myself with the right hand and found it much easier. Before I realised my handicap, I would do it sideways, gripping with banister with both hands. The doc told me that exercise was good for me. I suppose he is right, but I am still thinking about it.

Today is Saturday, the day when I do what I want/should. Mr. Swiss has been organised to bring me a fresh supply of Twinings breakfast and Lady Grey  tea and an extra bread to be frozen. As I was falling asleep yesterday I remembered we had not bought any bread as we had cheese flans for tea and did not need bread. I need bread for breakfast, so crawled to the freezer after midnight and took out the frozen bread I had. We no longer have any frozen bread, so an extra loaf is now on the list. I do not go shopping on Saturday, Mr. Swiss does it all and combines it with a coffee somewhere in a café.

Am now off for my occupational therapy, with the support of the vacuum cleaner, mop and other such assisting devices. Have a good start to the week-end everyone, and if you are bored, then be happy, it is an honour to be bored. Spare a thought for the people working in the supermarkets or in the MacDonalds, they have no time to be bored.