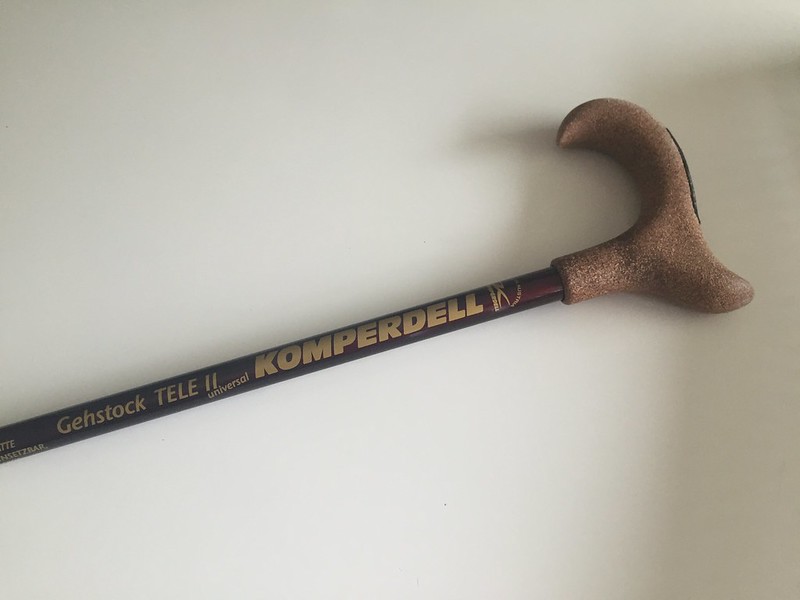 I travel bilingual since almost 50 years, actually trilingual, but the third part is only spoken being Swiss German. The other two languages are english and German.

I now need a walking stick to help me on my way and ensure that I do not stumble of fall due to dizziness or putting your feet in the wrong place. My feet do remain attached to my legs, but they have developed their own way of life. Short story, it has now been discovered that I have MS – ok no big deal I am not alone with this and it has probably gone unnoticed for a few years due to blaming it all to old age, being stupid and a few other misunderstood factors by me. You do not run to the doctor for every little ache and pain. It costs money and time and I was too busy with my life to bother. Now it has caught up on me. I can walk ok, as long as they are short distances with something to support me on the way. Even shopping is easy peasy as there are things known as trolleys which you can cling onto if the going gets tough.

Now is the time for a walking stick. The Swiss were amongst the inventors, being a country full up with mountains. We have perfectioned the idea of walking and our sticks are the best in the world, although after examining my choices in Internet I have discovered that the web site I found directs me to a German link. This is not astonishing as Swiss links are few and far between. I did not just want any old stick, like the one I found at home, I want something completely different. Just an ordinary brown design with a cork similar handle is not my thing. I like to stand out in the crowd. I am used to standing out being 1 meter 75 centimetres tall. Now I have a new purpose in my life, find the walking stick that suits your taste.

I was all for the gothic look, the stick with the steel, preferably silver, head as a grip in the shape of a skull. I actually found this, the price was OK, a little more expensive than the others, the problem being that it was a knob. I do not want a knob, but prefer a nice stable handle as in the photo.

I decided something colourful would be ideal. I do not want a folding stick, as there is no point in having a stick if I have to constantly fold it and hide it. I only need it for the long distances.

I quite liked the look of the one on the left. Nice and colourful, known as “Tropical Island” described as having a trendy Derbygrip made of stable cast resin with a tropical design all on a stick made of stable light metall. The height can be adapted and it also has a rubber at the end. The price is right, so this will probably be the first in my collection.

Looking further I also discovered one with a silver handle which was a few hundred € more expensive. Of course, there is also the execution with the gold handel, another 200€ more. I think I will remain with the Tropical Island. There are untold possibilities using a stick and I am sure I will soon be engaged in such conversations with other golden oldies “Where did you get that stick?” there eyes reflecting the green-eyed monster. Of course I will not tell them. I want to remain exclusive. They all have a computer and can do their own Google search. I have also decided to have it engraved for a few € more on a silver plaque with my name. The engraved plaque is placed just below the grip.

My pholosophy: if I have to have a walking cane, then why hide it. Mr. Swiss found “typical you”, although I am still wondering what he meant with that remark.

Daily Prompt: Understanding it all?

19 thoughts on “Daily Prompt: Understanding it all?”