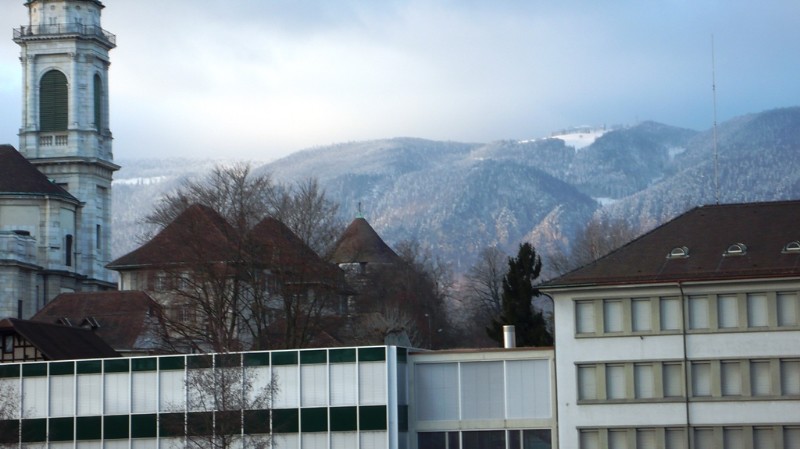 If you took the mountains away from Switzerland, it would just be boring. It would be flat no mountain roads to navigate and no tunnels to build. These mountains are everywhere. Take a walk into town and there they are. Now and again they hide behind clouds, but it is all a scheme to make you feel secure. The are always lurking in the background. Before I left England 50 years ago, I had never really seen a real mountain. Ok, I had spent a couple of holidays in countries where they had mountains, but as a tourist you did not actually find they were in the way, you avoide them. They were useful for a photo to show that you had been there and seen it. You did not have to do it.

Living in Switzerland you  join in for the thrill of it. The mountain cemeteries are full of tourists that found their fame on the mountains, especially when they fell off. The graveyards in the Bernese overland villages are full of the victims. For some strange reason family Angloswiss joined in and would spend their annual holidays in such places as Adelboden, Gstaad and Grindelwald . Everywhere you look mountains, they were in the way. Switzerland does not have an ocean, just a few lakes to compensate for the moutains surrounding them. I believe even the water in the lakes is mostly melted ice dripping down from the mountains. 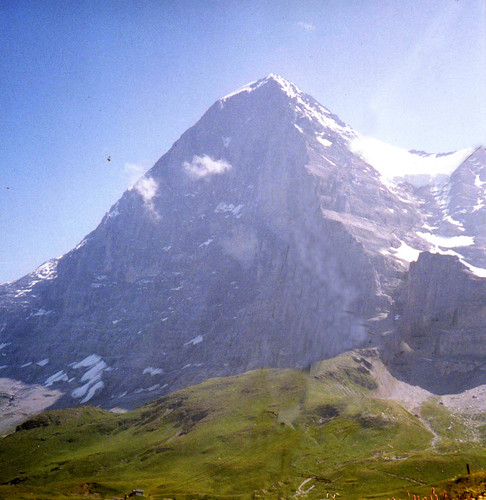 There was our memorable first holiday, for me, in Grindlewald. The photo is an original taken by me standing on flat ground with the camera. We had a holiday appartment, very comfortable, with a great view towards the mountains, of course. This mountain was in the way, very annoying. Every time you relaxed on the balcony it was there. Of course it was not alone, it was surrounded by other mountains, something called the Jungfrau and Mönch, but this was particularly annoying. A large bulk of rock, not even a nice slope to climb up and it was sort of hanging over from the top, putting everything into a shadow. Even the holiday appartment was full of books about mountains. It seeme to be a real obsession with the people living in the area.

“What’s that mountain over there” I asked after two days. Mr. Swiss was after all a born swiss, not just a paper Swiss like me and they had mountains in their blood, although he came from the lower plains of Solothurn,

“That’s the Eiger” he answered.

“Of course, if you have a look through the binoculars you can see the windows of the Jungfrau railway.”

I had been studying this block of mountain through the binoculars, but never noticed these windows until he told me about them. I should have married a dane or someone dutch, where mountains were more bumps in the roads.

I began to read the one of the books in the appartment, The White Spider by Heinrich Harrer, telling of the various attemps to climb the Eiger. For a non-climber, it sort of got me involved. The Eiger is over hanging, so it is not a straight climb up and plant your flag at the top. With today’s methods it can be done, but in the earlier days you were really lucky to survive. There is one place just over half way up known as the Spider because the ice gets into the cracks and looks like a spider. Here there is an opening in the wall and those that got that far noticed that this opening was almost without end, deep and dark. There was a climbing team that saw the frozen body of a mountaineer standing at the entrance of the spider, that reappeared after many years. There is the tragic story of the young Tony Kurz that was left hanging a few meters away from the window of the railway window where the railway worker was ready to help him, beause he could not free his rope from the hooks and died of exhaustion. There were many victims and after reading this book I saw this mountain no longer as a block of rock.

My holidays in the mountains were not exactly training grounds for being the first Angloswiss housewife to plant her feet on a summit, but our hikes were numerous. I could climb anywhere, the problem being that descending was not my sort of thing. I had my own system. Whilst my men were happily running down slopes like mountain goats, I would sit and sort of slide down the slope on my posterior. It was not very elegant, but I arrived in one piece.

My only mountain climbing today is with a car on a nice safe road, or by cable car or gondala lift, although in my younger days I did succeed in climbing the Engsligenalp a few times whilst on holiday in Adelboden. I thought if the cows can do it once a year, so can I. I must admit there was a path with ropes to hold onto in the less safer places.

And now I sit on the porch, see the Jura mountains at the edge of my village and enjoy life. If the Jura mountains were not there it would be a straight run to Germany and you would arrive much quicker in the Swiss border town of Basel. Why do these mountains have to be in the way?

Daily Prompt: Yes, we have mountains in Switzerland

16 thoughts on “Daily Prompt:Yes we have mountains in Switzerland”