Living in a country with 7-8 million population you would say it is smooth running. We even see mountains from the parking lot of our supermarket, although in between there are some local buildings, just to show that it is not all smooth running. We also work for our living, at least those that have not yet reached golden oldie status as myself. We are a direct democracy meaning that the problems are solved by the people through a voting system. You have a problem?:  No problem. Just collect enough signatures for your particular problem, hand it in and it soon becomes a people’s problem. To solve the problem we vote about it. Every Swiss citizen is his own politician, we do not just complain, we do something about it, although as a British ex-pat with a Swiss passport I am sometimes swamped with all the decisions I should make to enable smooth runnings. For that I have a Mr. Swiss who grew up in this system and usually makes the decisions, or I let him think he does.

Today is again a voting Sunday, when your mobile phone constantly makes noises with the latest results and the television programme and radio are telling you what is happening. Our TV is silent at the moment and also the radio, except for some Internet jazz music now and again. It is not that we are not patriots, we love Switzerland, expecially the cows and the countryside, Swiss fondue and cheese.  We have alps and banks, what more could you possibly need. It seems that there are a few loose threads to be tied today. 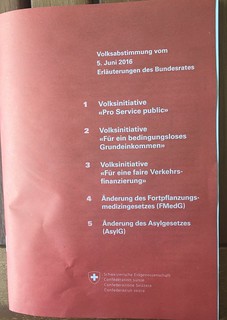 To assist with your decisions, the government sends you a booklet telling you the various decisions to be made, with an explanation. The political parties naturally also send various coloured pamphlets wanting to influence your choice in their favour. I thought it would be interesting to show a few of those pamphlets here, but when I asked Mr. Swiss where they were, he said they were now in the garbage, no longer to be saved or read. His opinion of the politial parties probably.

Of course our literature is available in 4 languages, French, German, Italian and an obscure language known as Romantsch, only spoken in our mountain Kanton of Graubünden, although I would add, they have a few dialects to complicate matters.

What is it all about? Do you really want to know? I had a quick look, but it is not worth while explaining it all. Suffice it to be said there will be no changes in the Swiss way of life to influence other countries, we usually just punish ourselves by having these referendums at least 3-4 times a year. Mr. Swiss and Mrs. Angloswiss have a good system. Mr. Swiss watches all the political discussions on the TV and listens to the radio, as well as reading the newspapers. He is then completely in the picture. We receive the necessary voting documents about a month before voting day. He then writes “Ja”, or “Nein” (yes or no) according to his wise decision and then fills out all the papers for himself, me and also my son who still lives at home.

The next part of this smooth running is to put the documents on the table together with a pen for our signatures. Of course we sign, what is the point about studying it all and thinking it over. I would mention this is the part when I ask Mr. Swiss what it is all about. His first reaction is “you should look at the TV, lisen to the radio and read the newspaper”. Of course I do, but generally my favourite programme is “East Enders” a british soap and Master Chef which is a cooking programme. I usually read a book when the political discussions are running as they are all talking in loud voices and arguing. I prefer my own smooth little corner. I must admit there are topics where I do not share Mr. Swiss opinion. Some years ago there was a vote to make everywhere non-smoking. He decided it was going too far with a “Nein”. I was of the opinion, being an ex smoker, now non-smoker since almost 20 years, that here a “Ja” would be a good idea. It was the last time that I filled out and signed a voting form with a different opinion to Mr. Swiss. Since I leave it to Mr. Swiss, with a quick glance to make sure that my life remains smooth where my signature might be needed, to put things into proportion.

This evening the results will be announced, with the probable result that my favourite German soap “Lindenstrasse” based on the english “Coronation Street” will probably be DVD’d as its timing would interrupt the Swiss voting results.

Yes, we are a direct democracy. There are decisions to be made, which might interrupt the smooth side of an Angloswiss life.