These statues are part of the ages of man. I would probably qualify as the one in front of the guy pushing the trolley, not quite there yet, but heading in that direction. I have a stick but do not lean on it, and do not yet crawl for the plain fact that I would probably no longer be able to stand up afterwards. 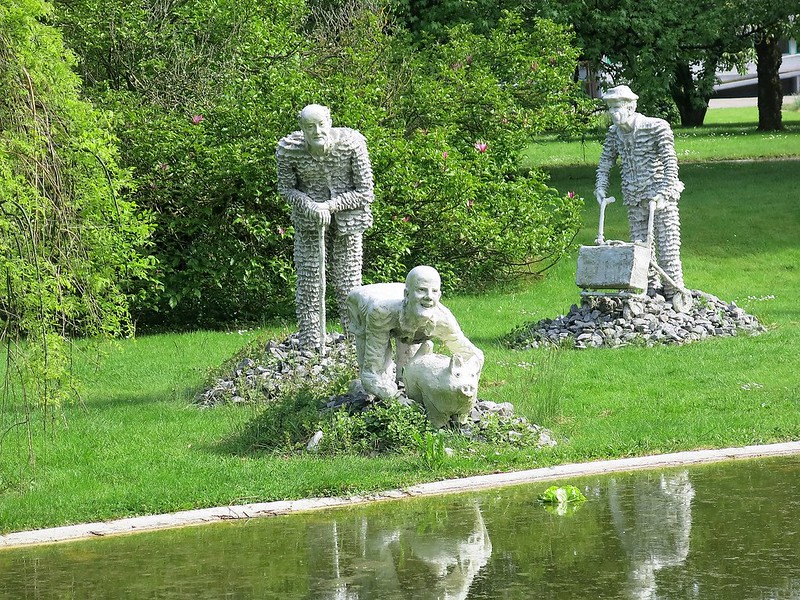 I just love those prompts where my first reaction is “huh” when I see the word and the second reaction is “let’s see what the others wrote” to discover what it is all about. My third reaction is to ask Mr. Swiss  to classify my epitomic values, to see if I could write something fairly sensible according to the word offered.

He did not know the word in english and to be quite honest neither did I. I looked it up in the German and I must say it said more to me than the english word, so now I should be ready to go, but am still not sure where.

Perhaps I am the epitome of a blogger because I do not have much better to do with my spare time. I was not the epitome of a blogger when we were getting rehashed 1-2 year old prompts that I had done before. This definitely destroyed my epitomic blogging values. However, we now have a breath of fresh prompt air blowing through and we received single words to inspire the spirit and set the cells alight in the brain, if we still have one that functions.

In compliance with my epitomic value as a blogger I am now writing I have cast aside all thoughts of laying on a sun bed and absorbing the rays of the sun, or taking photos of new developments in the garden. I am writing about I, me and myself because everything else would probably be boring. Who wants to read about the development of my lawn. At the moment Mr. Swiss instructed our Mowey to cut the grass as usual daily. We had thoughts about leaving it for the day as were not sure whether after the monsoon rains during the night it would be a good idea, but now the sun has arrived and Mowey is on his way, keeping the grass stalks all at the same length. Mowey is an epitome of following instructions as long as you press the right buttons.

For the lack of something more sensible to write I asked Mr. Swiss what my epitomic values would be. He thought awhile and said you have no “Berührungsangst” which lead me again to the english-german dictionary. I recognised the german word, but my english half of the brain did not. It seems I have no fear of contact, although this is not exactly true. I might take photos of spiders, but I do not pick them up and give them a spider tummy tickle. It seems he meant this in the sense of the word that letting me out can sometimes be quite surprising. I generally get involved in coversations with all sorts of people. I remember we were once on a weeks holiday staying at a hotel in London. There were a group of Russian tourists on the next table at breakfast.

“They are speaking Russian.”

“Yes, well let them finish their breakfast and do not start a conversation.”

Now how comes he thought I might start talking to complete strangers, Russians as well. They could have been planning to overthrow the british government. We finished our breakfast and was leaving the table, I mean you cannot be impolite and just walk past witnout saying something, and so I wished them a nice day in Russian. They were overjoyed, saying thankyou and laughing and there followed a complicated exchange of Russian words, for me at least. We left the restaurant, yes I am the epitome of friendliness and perhaps I helped to seal the friendship between two nations.

I have rarely taken a boring trip on a plane. Whoever is sitting next to you are best victim for an interesting conversation, although in this day and age of modern communication there are many that wrap themselves up in their laptop or mobile telephone composing their business documents or constructing the telephone messages for when the switch on time again arrives when the plane has landed. It used to be so interesting to talk to the lady next to you, to the extent that we were still talking when the plane landed and our coffee cups had still not been collected by the hostess. Once I had the luck to sit next to an IT expert and I could ask all sorts of questions about buiding web sites and html language. It was the time when I was attending a web assistant course and he was a complete hour at my mercy. He seemed to disappear quite quickly after the plane landed – hope I did not say anything to annoy him.

And now my prompt is finished for the day, I have a few epitomic appointments with my camera to take a few photos and as it is Saturday I will be cooking asparagus for the eventing meal. It is the season for asparagus which will be finished in June, so let us make the most of it.