Where shall I begin? It was the day when we had to change the tyres on our car. You know, from Winter to Summer style. Perhaps you do not know, does not matter, but in countries like Switzerland you cannot drive on icy roads in Winter with slicks, weak profiles on the Dunlop, you have to have something more snow resistant so the Swiss decided to pass a law, as they usually do, to have suitable tyres. It is an expensive law because you have to have two sets of tyres. If you do not have room in the garage, you pay a garage to store the other 4 tyres.

So it was the day of tyre change. Our garage had moved to an industrial area out on the bare plains of the motorway entrance roads. It is a landscape of car handlers, repair shops and anything mechanical which needs attention, not the most beautiful area you can imagine. It was a hot day, one of the first sunny days. We arrived at the garage, found it to be the wrong garage and so we had to turn the car . Unfortunately the road was being repaired, another obstacle on our way. 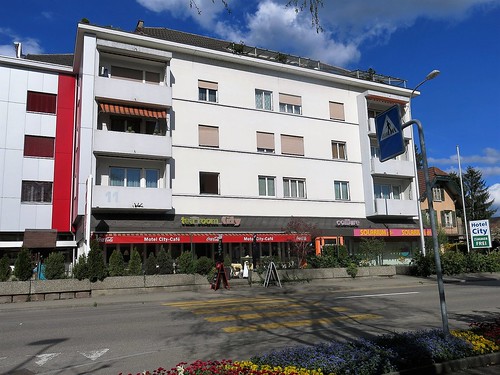 After uttering a few profanities to bless the roadworks, we arrive – at the wrong end of the garage. Luckily we were guided on our five minute walk to the right end by a garage person and so we left our car to the hands of the capable tyre changers, being told it would take an hour. From here we walked to the next restaurant which was in the neighbouring village. The nearest restaurant had now become a sort of one day hotel for young lady’s and men, so we decided to move on. After finding a suitable restaurant we ordered something to drink. Mr. Swiss noticed in the meanwhile that I was no longer walking, but sort of dragging my feet and made a wonderful suggestion. I will fetch the car and you can stay here and I will pick you up afterwards. He waved goodbye and left me.

I decided to accept his offer and after sitting under the shades of the restaurent moved to the opposite side of the road where I saw a bench which looked quite comfortable. 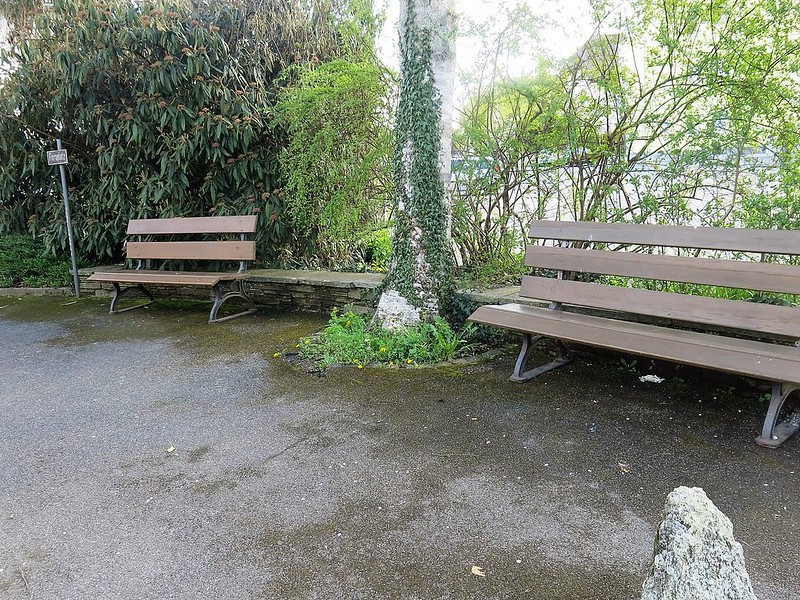 As I had my camera with me I took a few photos. I did not know that this would become an epic of chance encounter at the time. I was sitting on the bench, relaxing and thinking about taking a walk. It was then that a gentleman appeared. He was walking along the road, cast his eyes on me as probably the ideal victim and began to talk to me. I noticed this gentleman was not Swiss, but definitely from the Indian sub continent. I made the mistake of answering him in english. He was happy, just what he needed for a discussion.

“May I sit down?” he asked politely. I decided a conversation between two cultures could be very interesting. We spoke of where he came from and where I came from and then he proudly showed me a photo.

“These are my children” he said. There must have been at least 40-50 smiling faces of children on the photo. I was astonished, he was definitely 30-40 years younger than me and I found his potence astonishing. He continued to tell me they were part of an orphanage in his home country, and he was hoping to raise funds for them.

I am not a miser, and contribute now and again to a worthwhile charity, but here I was a little sceptical. I asked him how he came to arrive in Switzerland. He told me with pride he had been sent by his organisation. I still did not know what organisation it was. Soon came the big question “would you be interested in a donation” etc. etc. I remained hard and was now hoping for the telephone call from Mr. Swiss that he was on his way with the car, but no such luck. I decided to be hard and resolute. People passing by were already looking to see what an elderly lady was doing talking to a foreign gentleman who was wearing a sort of scarf on his head. I told him firmly I had no interest in donating. It is amazing how quick these chance encounters can end when you say no. He departed and then came No. 2 chance encounter.

This time it was a young man who was sitting on the next bench. He rose and approached me.

Was that gentleman bothering you?” he asked. I was now confused, he was not really bothering me, until No. 2 chance encounter asked this question. Were they partners sizing me up for a worthwhile kidnapping. Where was Mr. Swiss?

The second gentleman put his hand in his pocket and withdrew ….. a card encased in plastic. It was the proof that he was a Swiss policeman in plain clothes and was keeping an eye on things. He explained that he would follow the Indian gentleman and ask him a few questions. I noticed that a lady was standing on one side, also belonging to the policeman, it was a complete squad. I watched as the plain clothes man approached the Indian gentleman and spoke a few words with him. I felt quite sorry for my first chance encouter, as he was only doing his job, collecting money from the wealthy swiss for his 40-50 children. Enclouter No. 2 returned and I asked him what the result was.

“No problem” he said, “he is OK” and that was my excitemet for the day. In the meanwhile Mr. Swiss phoned to say it took longer than he expected but would pick me up in half an hour. I explained to Mr. Swiss of my exciting moments and he muttered something about these things always happening to me when left on my own.

It was not a romantic encounter, nor was I kidnapped, robbed or anything else exciting. Just a talk with an Indian gentleman and a plain clothes police officer. Our car now has summer tyres.