I could trip over a leaf, if there are more leaves and it has rained, it would not be a trip, but a skid resulting in a fall which could lead to a broken limb and a stay in hospital. dangers lurk everywhere in life.

You are born and placed in a crib and cared for  by your mother, hoping that she does not drop you. As a baby I survived Whooping Cough, at the age of 11 a schoolfriend passed on the chicken pox, as a matrer of fact I think half the school was absent with chicken pox. Somewhere along the way I got scarlet fever. I survived it all. Yes it was a charmed life.

Risks are part of existence and if you survive all the risks in your path, then you no longer consider them as a risk, but a way of life. I suppose getting married could be thought of as a risk. Perhaps your future husband is not what he seems to be. He might be a marriage swindler, wanting your fortune. No, I did not have a fortune when I married and neither did he, so we both started on equal terms. Of course, he could have been one of those compulsive murderers, but perhaps I also had that problem, you never know. We have survived 46 years together up to now.

I overcame life quite risk free actually, my bones were all complete and I could run and catch the bus if it was preparing to go. It all began when I was retired. My body seemed to decided it was now time to put it all to the test. “Does she really think she is the bionic woman, we will prove it otherwise.” There was a rebellion beginning in my body parts. “Who does she think she is, never broke a bone.” One fine day I was in London and took a walk across one of their famous bridges, the Tower Bridge. Body said “let’s fall down here, it is a memorable place to have an accident”. So I fell, protecting my head with my arm. I survived but my arm broke. After 2 days in a british hospital (which was also a risk at the time) I flew back home with a broken arm. I recovered and then it was that the body said “let us break the arm again”. It was the same arm, I tripped and fell in the garden.  I could have hit my head on the concrete floor, but managed to break the fall by rebounding off the garden shed door. I am sure my body planned it that way. 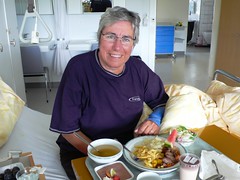 I was even smiling for the photo in my hospital bed where I remained for a week, note the arm support. In the meanwhile I had already had the wire removed from the first breakage, who needs wire when you can break your arm so well that it can only be pieced together again with a metal plate and 16 screws. I was now not only bionic but reinforced with high speed steel.

Somewhere on the way my twin made itself noticeable. Ok it was just a collection of cells, in the Stephen King style where I suddely gave birth to a second me, but this twin that never really got anywhere decided to grow and so a 3 hour operation was necessary. A few years later it decided to grow again and after seven hours they had removed it, along with my appendix which was in the way and another organ, which I actually no longer needed as I decided the risk of becomig mother again was not necessary at the age of 55.

I survived it all, my biggest disappointment being that I never made medical history with my reluctant twin, known as teratom.

My only risk today is that my bank would go bankrupt, my computer(s) would be infected with a virus or I might have a fall. Oh, come on, everyone has falls. It is just that when I fall I generally cannot rise again, unless the arms of a strong man help and Mr. Swiss is also now a golden oldie, so his arms are not what they used to be. Come to think of it, life is one big risk.  It is far too dangerous out there. I could be robbed on the street, trap my hand in the conveyer belt in the supermarket. What if I develop an allergy to milk, oh I forgot, I have already got that one.

I give up, what a depressing title this is becoming. I hope they let me out soon, so that I can tell everyone about it. I hate those padded walls and they keep tying my hands behind my back when I have to wear this special dress. Yes, life is one big risk, so just avoid me if you see me.