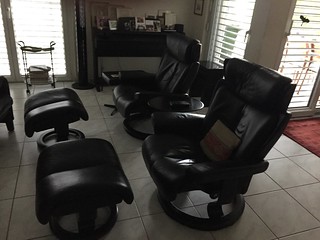 I do not like the word “giggle”. I find it a stupid description for a laugh. It is often found in primitive pieces of writing about “having a giggle” or “they were all giggling”. I do not giggle, I laugh, I might be hysterical. Perhaps there are tears of laughter running down my face, I have even been known to almost choke, especially if I am eating something at the same time. That is a serious situation, but because of the laughter and amusement at whatever it is, no-one takes me seriously. I could choke to death, but at least I went in an amusing way. I do not giggle, I have never giggled, giggling is for the others. I have never been infected by someone’s giggle. A giggle can even cause an annoyance, if you want to concentrate on something else.

It is evening in the Angloswiss household, all the daily chores have been completed, there was nothing to laugh or even “giggle” about, beause it was a serious process of cleaning, cooking and feeding the family. At last there is peace and quiet and time to relax in the special “stressless” chairs, made in Norway, where peoople do not seem to have stress. I wonder if the Norwegians giggle? To continue, Mr. Swiss takes his relaxing position in a chair with his Kindle and Mrs. Angloswiss decides to join him, with her own Kindle of course.

“What are you laughing about.”

“Are you OK?” she asks concerned.

Of course I was disturbed, just reading the last pages of my mystery, horror book full of blood and thunder.

“What’s it about? It is one of those detective stories.”

I am now running out of words to describe the hysterical guffaws from the neighbouring chair and was having problems concentrating on my book. At last Mr. Swiss closed the Kindle. Did it run out of power? No, he switched on the TV, it was time for the news. In the meanwhile I had finished my book. It had a happy ending, nothing to laugh about. The vampire woke up in the morning, left his coffin and forgot about the sunlight and so he shrivelled into a pile of ashes. The vampire hunter had drunk some LSD before letting the vampire have a bite and that is not good for vampires.  Everyone survivied except for the vampire: a happy ending and no reason to laugh or even giggle. No, you do not giggle after reading a vampire story.

I decided to start a new book. It was the next book in the Terry Pratchett series of books about the Discworld. You know, the flat planet balanced on the back of four elefants that are standing on the turtle Great A’Tuin, travelling through the universe. Terry Pratchett can be very amusing, especially when you discover that Death now has an apprentice to help with dealing with the dead. I laughed.

“Shhh, I am listening to the news.”

I was silent and then the wizard Rincewind appeared. This book was really funny. No I did not giggle, because as I said I hate giggles. They are primitive, silly and annoying at the best of times. I am the mother of two sons, and so they did not giggle, it was more ho, ho, ho, etc. etc. like their father I suppose. Anyhow I laughed, no it was amounting to a crescendo”

Action from Mr. Swiss: he records all important programmes on the TV, so he lost no gem of the immediate happenings in the world. I noticed the motion of reversing the recorded records of the news, to ensure he did not miss anything.

“I am trying to listen to the news.” he said: Unfortunately I was still sunk in the amusement of the book. I really tried my best. It was a good job I was not eating anything. I am rather partial to potato chips in the evening. There could have been an accident with the result that I might have to go to the ER at the local hospital choked on a potato chip.

Eventually the news was finished, under the pain of controlled laughter. I was happy, I could now read my book in peace and laughter. Mr. Swiss decided to join me and continued reading his book.

Just a normal evening with the family Angloswiss-Swiss.