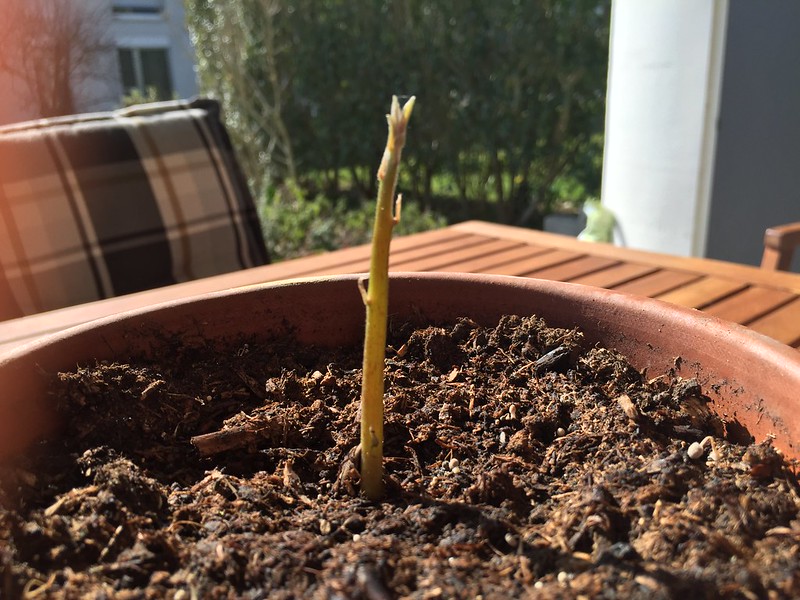 This is my umpteenth try at growing an Avocado tree, but one day I will succeed I am sure. It was a big seed, so what could possibly go wrong. I threw it in an egg cup full of water, ensuring that the bottom part was always covered in water. I know you can suspend it over the water by sticking toothpicks in the side of the seed, but this was such a mega seed I decided to let it fight its own way through the undergrowth.

Eventually I could see that my avocado was ready for the planting session as a long white fleshy root had appeared and the seed was beginning to split. I had tried this experiment before, but had the great idea of trying it with hydroponics: the system where it just grows in water surrounded by little carbon balls and you feed it with the special liquid. This did not work, so I decided it will now get its own pot of soil. I even had a few words with my gardener (did he have a smile on his face?). He said I could raise it in a pot and if it grows big and strong I cold risk putting it in the garden. He did add that it was not a fruit destined for the Swiss snowy climate, and that in Winter I should surround it with a thermal shroud to make sure its roots did not get frozen. At the moment it is sitting with me outside on the porch.

Yes, today is the first day of the year that the sun has been shining and it is warm. This morning we organised the chairs and table for the porch. This afternoon I will put my giant metal frog in the garden, together with the pixie with the shovel in its hand and the owl. Mr. Swiss finds I overdo it with my garden ornaments, but I find them a nice pretty arrangement.

“What did you say avocado?”

“I am digressing, this blog is about you? But you are not doing very much at the moment, just growing a long stalk with the promise of a few leaves.”

“Just wait, but don’t forget to cut my stalk back when i am 6-7 inches tall. I only need 3 inches and then I will start on my journey by supplying your family with avocado fruits for the next years, although it will probably take 3-4 years until my first fruit grows, but Rome was also not built in a day.”

“No, just look in your computer, there are enough instructions there. Now I have to concentrate on growing.”

In the meanwhile I left my avocado to fight his own fight. Speaking of fighting, every day is a fight really. The first battle is to get out of bed. I have my own system and it usually works. I then attack my living quarters armed with the vacuum cleaner and a mop. If I survive I progress to the bathroom where I take a chance with the shower. Generally I emerge clean and ready to go, although the older I get the less easy it is to climb in and out of the shower.

The battle continues and I decide to embark on a hunting expedition to the supermarket. This morning was Friday, the day when I capture the spoils of food for the week-end. It was quite successful. Mr. Swiss was positioned with the shopping list on his iPhone and I had the same list on my iPhone. I usually send him an SMS before we depart. We circulated amongst the other warriors, collecting the spoils and met somewhere between the frozen goods section and the pasta to compare notes. We both had one item left, to be exact I had one item left, because I pause now and again to eliminate the gained trophies from my list. Mr. Swiss seems to do all that mentally. He still has a full list but strikes mentally the conquered items by telepathy.

With pride he glanced at his watch and discovered it was only 10.45 a.m., meaning we were ahead of schedule. I just had to pick up East Bunny No. 3 to complete my collection and we departed. The supermarket gives you points according to the amount of money you spend and you get a sticky for a card. When the card is complete you can choose an Easter Bunny. I have now completed my collection of 3 Easter Bunnies. I could. our course, continue collecting, so I took another card to fill, just in case.

After arriving home, we nursed our wounds from  the siege and I cooked lunch. I think there is now a truce on the scene as I am sitting outside writing my prompt and there are no battle cries in the air except perhaps for a few moans from my avocado plant as it fights its way into the sun.