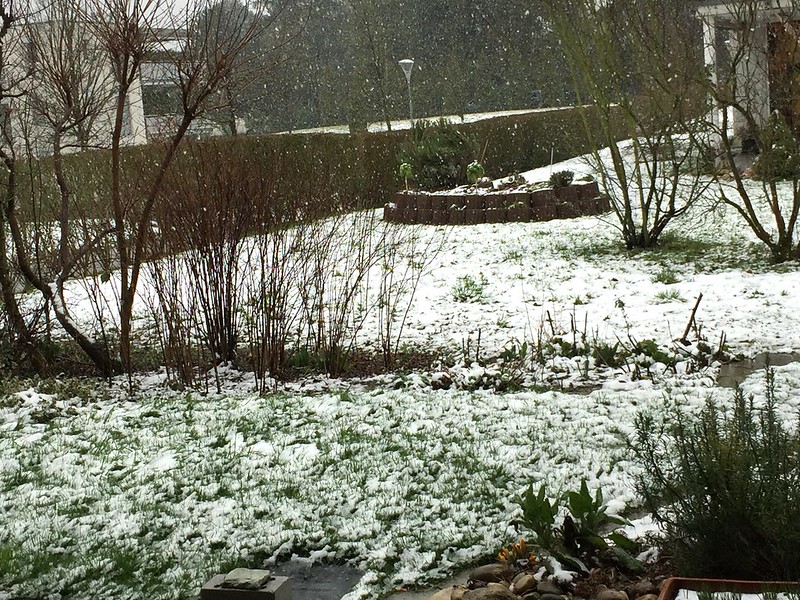 Since I left my bed this morning, just over 7 hours ago, it has been snowing on and off, but more on than off. Mr. Swiss had to battle his way over snowy roads, which had begun to freeze on the edges, for a drum lesson, but it was just one of life’s little sacrifices I suppose. He is now safe at home, so I no need to long for his hugs and other endearments. They were part of the package deal anyhow when we got married 47 years ago.

I had been longing for new prompts for almost 2 years. I thought I was being ignored, forgotten by the cyber powers, but no: another mistake. Since the day that only appears once every four years, I am getting them regularly, daily. I do not really trust it 100% up to now, but let us make the most of it. They are only one word, but given to inspire our thoughts, ideas, and perhaps our dreams. I also noticed that many wandering sheep have returned to the daily prompt fold since the return of the prompts , so let us make the most of it while it lasts.

What do I long for? My first thought was perhaps a night out with George Clooney or Brad Pitt with all the trimmings. In the meanwhile it seems that George Clooney lost patience with waiting for me and got married and Brad Pitt has reached the age of 52 years, so I decided no longer to wish for what I cannot have or will soon be receiving his senior state pension.

In the meanwhile it seems I am still popular. Tell me, is my photo something to encourage the male species like moths to a candle. I use the same photo on Facebook as WordPress as I have not yet managed to get a photo made at a model agency. They have put me on the waiting list it seems. Over the last couple of weeks I have received at least three friendship enquiries from men on Facebook. I was flattered, pleased that they chose me from the millions of good looking mature women in Facebook. I actually know none of them by picture or name, but decided to have a closer look.

The first one was OK, not exactly god’s gift to woman, but he would do. He had recently changed his photo showing him with his daughter, or something in that line of things. First suspicion! Why does a man with looks resembling a 30-40 year old show himself with a little girl, about 3-5 years old in a photo, resembling something in the Bryan Adams style, want to get to know a lady showing grey hair, in glasses, more in the golden oldie way of life. This was suspicious and so I decided to let the chance go. He was not the type I was longing for. The next one was somewhere in the states, but told me he was British, which was suspicious. I am in Switzerland, so I think there was no chance of a get together and sharing our life. He was also nothing special in looks and could do with a visit to the bathroom for a shave.

Today No. 3 arrived. He is still fresh in my mind and the photo is also still there to study on Facebook. I could show it here, but do not want to embarrass him. Perhaps he is really lonely and longing for a soulmate, someone to share his dreams and wishes with. He has grey hair (at least so do I) and it covers his head, which is not so self-evident today. He is very well built, not quite Arnold Schwarzenegger, but he is not my type in any case. I think it is called barrel chested. He is wearing a grey denim shirt and fills it out very well.

“Some guy that wants to be my friend in Facebook.”

“Do you know him? Probably a scam.”

I decided that Mr. Swiss was right, never trust strangers you meet in Facebook. Facebook did not exist when I met Mr. Swiss and we met in real life.

I listened to the voice of reason and sense and ignored No. 3’s wish. I have everything that I need. Who knows, he might be a serial killer, preying on golden oldies in Facebook. I noticed he was english, but that was all the information he gave.