If it’s autumn or winter where you live, what are you most looking forward to doing next summer? If it’s spring or summer where you are, what has been the highlight of the season so far for you? 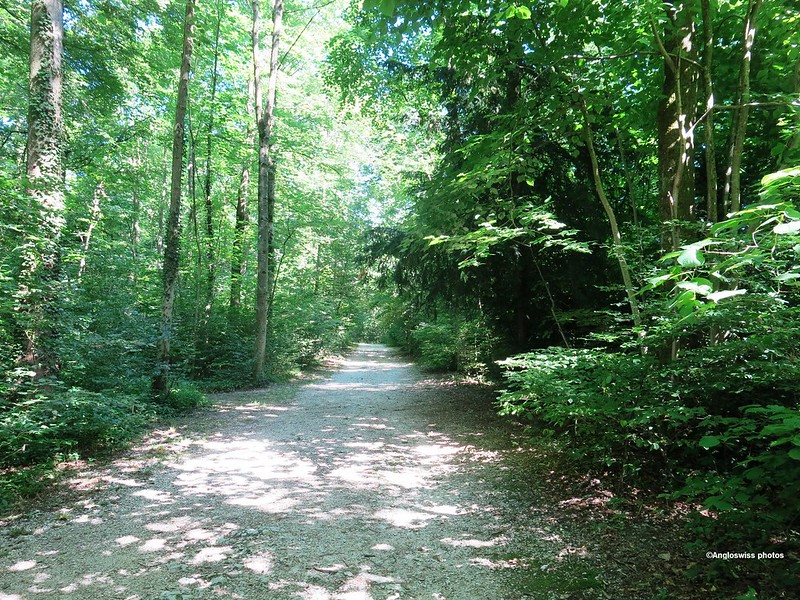 Walking on shady paths in the local forest is one way of escaping the heat of the Summer days, because those days have now arrived. I was getting advance warnings from Mr. Swiss that next week we will have tropical heat and next week has now arrived. I often think he missed his vocation as a weather expert. He watches the daily weather report on the TV with eager eyes, passing negative comments about the guy who is telling us all about it. This weather expert is not an expert and does not have a clue, but there again he is a Eastern Swiss and the Eastern Swiss are not the same as we central Swiss. They have banks and think they invented meteorology. The guy always talks about the “temperatura” but the temperature always does something different to what he says. Swiss meteorologists seem to speak a different language to the rest of us, so perhaps they are just not understood by us Bernese/Solothurn Swiss. OK, I mean they are only humans, and even human weather forecasters make mistakes even of they are from the far East of Switzerland. If they did not make mistakes then Mr. Swiss would probably not bother to watch the forecast and one of his favourite programmes would be missing.

Now the tropical heat has more or less arrived, so Mr. Swiss was right and, for a change, so were the Swiss weather reports. I remember my days in London in the heat of the town where the concrete would reflect the sun’s rays with a vengeance. Ice cubes were prepared for a worst case scene to quench the thirst and cool down. There was no escape from the heat and so all the windows were kept open “to let in some fresh air” as my mum said. Unfortunately it only let in the hot air from the sidewalks (notice how I adapt my language to our colony over the pond – we Brits say pavements). Mr. Swiss being Swiss showed me how to do it. He says all blinds down, windows closed – then we have perfect temperatures indoors. Actually he is right, it does stay cool indoors when you prefer to live in a dark room more suitable for developing photos. Unfortunately I still have a streak of fresh air in my London blood system and the dark room effect gives me the feeling that doomsday is just around the corner, with a slight claustrophobic tinge.

So what do I do? After my golden oldie sleep at lunchtime, which now takes place in a dark room with the windows and blinds closed, I surface for air when I am awake. I grope my way to the window leading to the outside world and arrive on the patio. This is also protected from the midday sun, or any sun for that matter, by the sun shades which ensure that the floor tiles do not radiate heat. Our back garden has full sunshine all day but I am protected against any negative effects. There was a time, if you see my original blog on this subject April 2014 when I was a sun worshipper, allowing the rays to turn my body into a sun tanned film star lookalike. This could still happen, but a couple of years later my contours are slightly more in the expanded mode and the ideal bathing suit has not yet been produced, so I remain in the shade in the background and absorb the benefits of a warm afternoon, whilst Mr. Swiss mainly remains inside. I would add thanks to my natural Southern skin type, it still turns brown in the sun, but it takes longer to get the overall effect due to the wrinkles and creases which have arrived in my later years.

As I sit here writing my daily opus, I can hear the birds tweeting in the shade of the trees and the traffic on the distant local road. The sun is beating down and I now think it is time to have a cooling drink and hope that we might have one of those classic electric storms this evening, complete with fork lighting and torrents of rain so that I will not have to water the garden myself today. I have not yet seen the guy with the ark collecting animals, so I suppose this evening there will be no deluge.

Oh to be in London on a hot summer day with open windows, the smell of the local traffic and the noise from the sparrows searching for a tree to shelter.

Daily Prompt: In the Summertime – don’t believe the meteorologists