Never really thought about it. I just react, and if I was unhappy with the way I reacted I probably would not realise it because the crisis would be occupying my thoughts and concentration. 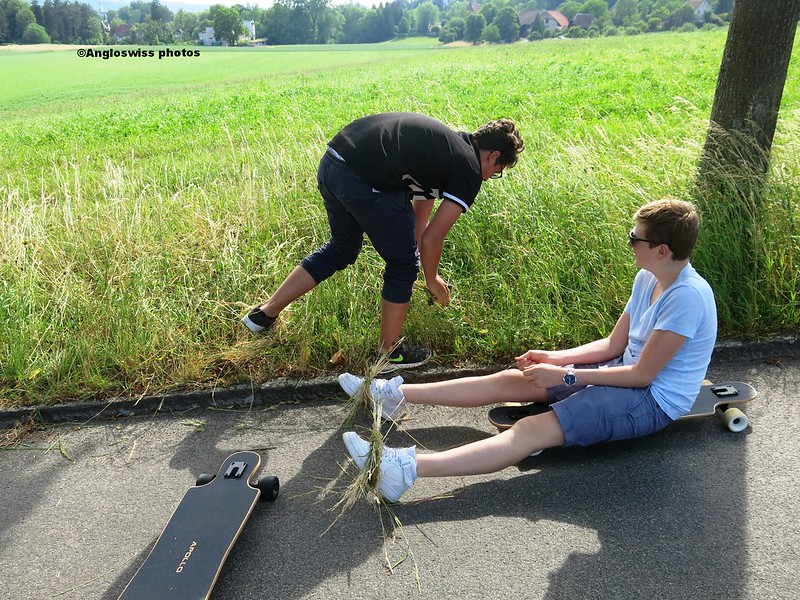 I met these two skateboarders whilst on one of my marathon walks through the local countryside. It was at the top of the path from the castle, which was the perfect launch for their skateboards, having a downward incline all the way. They had a problem, a big problem, probably involving their mum – and perhaps dad. They decided to go all the way down on the skateboard realising that their unique, newly purchased special skateboard shoes would be needed perhaps to reduce speed on the way. No-one wants to demolish their shoes, and above all a nice skateboard – it could become an expensive risk. Mum would probably refuse to buy a new skateboard and as buying new shoes is almost as expensive as a skateboard, that would not be very positive.

The two boys were confronted with a problem, but they showed courage and initiative. The decision was made to protect their shoes from the record breaking descent speed. They began to collect grass, the tough kind of grass, in bunches and ripped it out of the field. It was a good thing that the farmer was not around, he was busy combing his cows for their appearance at the milking station and putting them in the mood by washing their udders. So these two brave speed warriors wound the grass stalks around their super expensive designer shoes, thinking of the crisis that their mothers would experience if they returned home with burnt soles on their shoes.

Eventually they were ready to go and spotted me with the camera. I took a photo in memory of the day when they did the downhill run from the castle and we shared a joke, when I mentioned that mum might not be very happy about the situation. They reacted with peals of laughter. Yes, modern youth is strong, brave and ruthless – the desperadoes of the downward run.

Side by side, with their shoes bound in wild grass, they perched on their boards, gave a professional kick and were on their way. I was ready to take another photo of their journey, but they were so fast it would have been just a blur on the photo. Half way down the slope they came to a stop. One jumped off the board and the other fell off the board – but they were still in one piece, the ground being covered with torn remnants of grass. It would have been a good idea in the creation, but in practice it did not work. Speed and friction took their toll on the grass stalks. Were they injured, did I have to admonish first aid learnt by my years of practice in the village first aid group? No, there is no cure for laughter, enjoyment and youthful crimes. They both came up laughing their heads off. As I walked past I made a remark about whether mum would be so happy if she could see them now, which encouraged more peals of laughter.

So is modern youth today, they are resistant and strong, the stuff that our future generation is made of. I wonder if they can iron their own shirts? They continued on their way, without grass, and reached the bottom of the hill, talking about the design of their new skateboards and perhaps a better pair of shoes with skid proof soles.

Daily Prompt: In a Crisis – The loneliness of the downhill skateboarders