You have 20 minutes to write a post that includes the words mailbox, bluejay, plate, syrup, and ink. And one more detail… the story must include a dog named Bob

Don’t you just love it when at last Daily Prompt comes up with a new prompt. Unfortunately they have lost it somewhere in between, because it has been so long they have forgotten how to put a new prompt on the grid. Nevertheless I will write regardless. If we are lucky it will appear today, at the latest tomorrow morning, when everyone has forgotten what it was about in the first place. 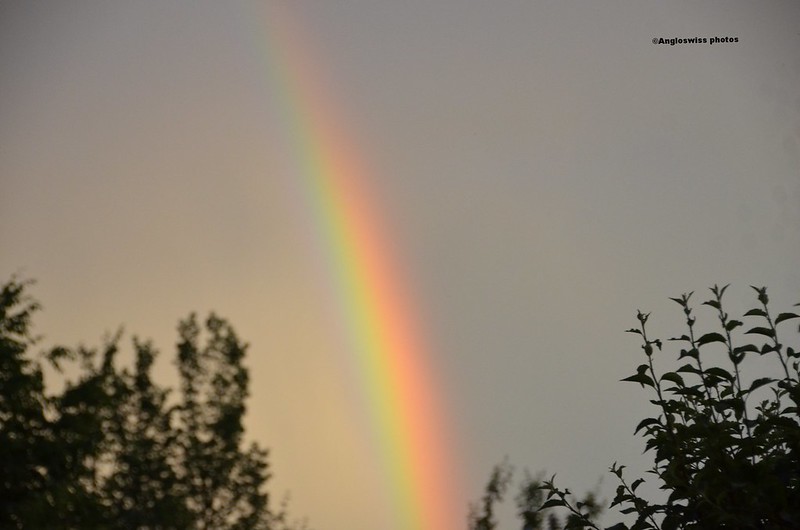 Actually I was thinking about writing about the rainbow I saw after one of our thunderous monsoon similar rains one evening this week. It was really fascinating and everyone was busy clicking their cameras to capture the colours. I had a sort of Judy Garland type of feeling especially as this particular rainbow was pouring its colours out of my mailbox. Is this some sort of omen to warn us of an invasion from the third kind? It is suspicious. Many of my neighbours are having their letter boxes removed, although this in itself is a dangerous task. Mr. Crumble from across the road disappeared last week. He put his hand in the letter box and was slowly drawn into the slit. Mind you he fought all the way, kicking and screaming but to no avail. With an explosion of seven colours (red, orange, yellow, green, blue, indigo and violet in that order) he eventually disappeared. That evening a rainbow appear with Mr. Crumble sitting on it singing “Somewhere Over the Rainbow”.

I heard that the postmen are now dressed in tin helmets and body armour to protect himself from attacks by the new dogs in the neighbourhood. Mail has been arriving wet and soggy with large teeth marks where it has been torn into shreds by Bob the leader of these dogs, probably because of his stainless steel teeth. It is not quite clear what breed he is, but rumour has it he is one of the four dogs of the apocalyptical canines, the others being Fido, Bluejay and Nightmare. They represent postman (Bob), bones (Fido), newspaper fetching (Bluejay) and dogkill (Nightmare).

It is advisable to perhaps leave a plate of chopped liver garnished with chicken blood next to the letter box to keep these dogs fed and to appease their voracious appetites. A bowl of syrup, laced with belladonna or digitalis would be their favourite beverage. Dogkill loves it and will probably scratch your door begging for more. Ignore, one plate is enough otherwise he could transfer to overkill.

As these new dogs could become a danger the local government has issued a warning pamphlet. If a dog appears in your garden and devours your cat or your pet hamster then cover your canary’s cage with a dark cloth and call emergency services at once. Do not, under any circumstances, befriend one of these dogs by petting and stroking. Our hospital emergency services are overstrained with amputated fingers, and they can no longer accept new cases. The only advice we can offer at the present time is to write a notice on your windows or door in indelible ink “Dogs not welcome, especially the four Apolcalypse breed.” These dogs can be the end of civilisation as we know it and yes, they can read. And hide your computers before they make contact with their boss. If he arrives things could really get bad. He is known as Rin Tin Tin and in charge of an army of dogs.

Daily Prompt: A dog named Bob – alarm, alarm, we have a new prompt never seen before