We all have things we need to do to keep an even keel — blogging, exercising, reading, cooking. What’s yours?

It used to be blogging until my idea of a daily fresh blog was murdered, killed, destroyed by those who will not be mentioned by continuously repeating everything – like been there done that. Then we have exercising of course. When you reach a golden oldie age exercising would do you good if you could still move your limbs and co-ordinate movements. I even tried it with Tai Chi, nice and slow, no stress. Well let’s forget about it because you get enough exercise when you get out of bed in the morning or perhaps afternoon if you do a golden oldie midday sleep which I do.

Now reading is OK, I can just do a few movements on my Kindle and hoppla the book has arrived. Find a comfortable chair (one that you can leave afterwards without thinking about it – you know aching backs and legs that do not want to move) and the task is completed. You can lose yourself in a book, just imagine you are the murderer, police chief, scientist, monster – or whatever. Cooking is a means of survival. You have to cook to eat. It is not everyone that wants to live on hamburgers or sandwiches, so I cook just to keep the cholesterol and sugar levels in balance.

In spite of all these good suggestions am I on the edge? No, I am the perfect body of balance. Just to show how well balanced I am, the latest photo of Mrs. Angloswiss with one foot on the stairway to her villa, at least it would have been my villa if I had more money and it did not already belong to the Kanton of Solothurn. Anyhow it’s a nice walk to the top of the hill. It is known as Schloss Waldegg and was built as the Summer residence of the French Ambassador some time in the dark ages when there were things like servants, 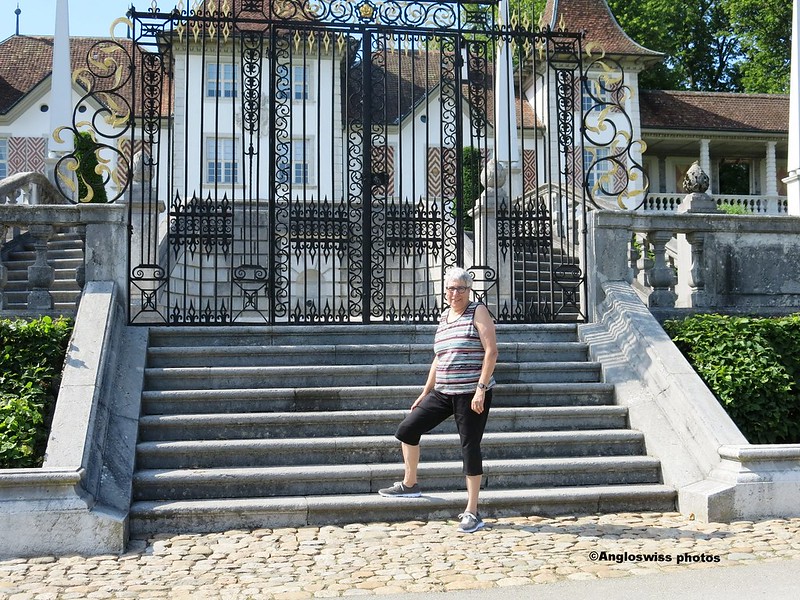 Now it is just a place to view, organise a wedding feast or a concert. Mr. Swiss took this memorable photo yesterday on a nice sunny day, with a slight breeze which was ideal for one of our iron man walks. Note the dress – perfect for keeping an even keel, especially the shoes. My feet never leave my legs when I wear them, although Mr. Swiss is always ahead, he is my scout, my Rowdy Yates – remember Rawhide with Clint Eastwood, yes. I am never on the edge with Mr. Swiss leading the way. This time we noticed a few fields were in the way, and so we stalked through them undaunted fighting against stalks, bees, stinging nettles and other walkers we met on the way. Yes, we squashed them all leaving behind us a trampled path littered with our victims. 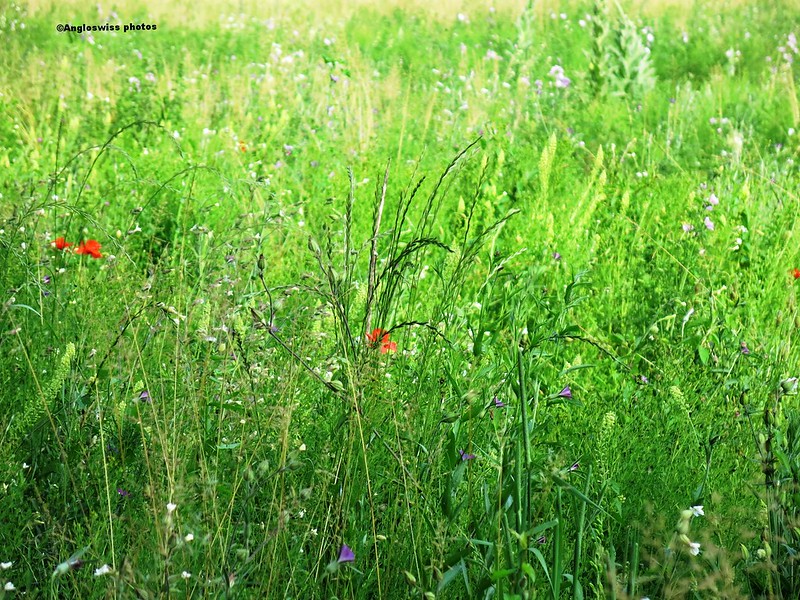 Imagine the fight for survival after crossing this wild patch of earth. It seems that the farmer’s imagination ran amok and he decided to throw every seed found in the Nature Boy’s Encyclopaedia for Wild Flowers into the meadow. Even a wild poppy succeeded in appearing.

There will be more about this death defying walk later this week. I have just returned from town, hence the late time in posting. I was on a quest for clothes to wear at my son’s church wedding. Again I discovered that if I was 20 kilo lighter and my waist still existed, I would have found something immediately in one of those high fidelity boutiques, but again I visited the shop catering for larger sizes. If my blogging friend Marilyn is reading this she would have been delighted. I found super trousers with expanding everything, for the aperitif on the day before the wedding. Really, she mentioned them once in a blog many moons ago, but now it seems they have reached Switzerland. I bought two pair immediately to be sure and checked that they always have them in stock. In Winter they even have them with a warm lining.

For the actual mother of the groom occasion in the church, I also found something, so I am a happy bunny. Mr. Swiss came to support me in my quest, but half way through I told him to have a coffee somewhere and I would do the rest on my own.

I will now leave you all and return tomorrow full of exciting tales to tell about how to go on a safari in the Swiss countryside and return alive.

Daily Prompt: On the Edge – Remember weeds do not die, they return in full force