What’s the strangest place from which you’ve posted to your blog? When was the last time you were out and about, and suddenly thought, “I need to write about this!”?

I do not really do strange places and sit comfortably on the patio when the weather allows and blog. Of course sometimes strange things happen to disturb the normal course of blogging, like this. 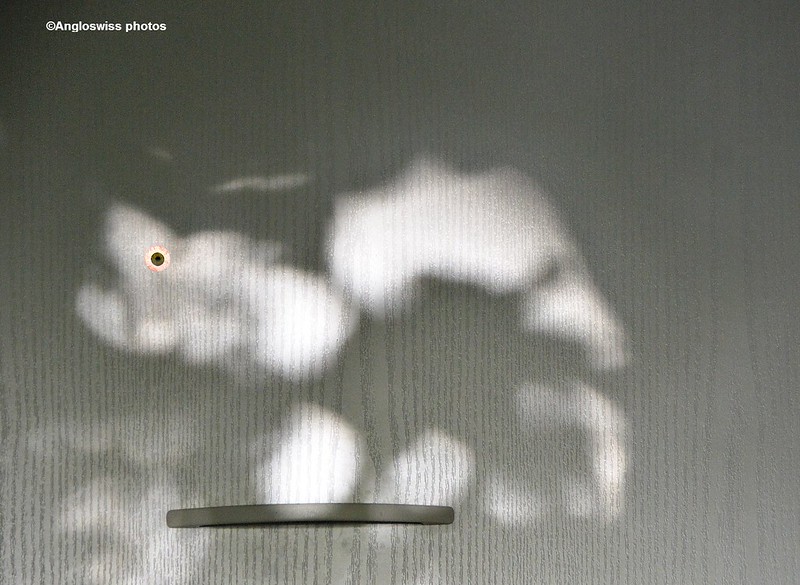 It appeared without warning whilst I was blogging. I felt very unsure, as it was an unexpected intrusion. I was convinced it had been sent to test my mental reflexes, so I decided to stay cool. It remained, unchanging, but glaring at me with one eye, its head held high and its mouth open (see on the top left). I decided to ignore it, thinking it might go away, but it didn’t.

I hate being stared at when I am blogging. Blogging is almost a task of dedication. To live is to blog, or is it the other way around. In any case my afternoons are not complete without being able to blog. It is very disturbing when something is constantly staring at you. I decided to strike up a conversation to see if it meant any harm.

“Hello how are you today?”

No answer, perhaps it spoke a different language. I tried my knowledge of Jabberwork.

Again no answer, I mean any monster or threat understands Jabberwock.

“Not all of us chunky momraths, in the bandersnatch borogoves.”

Ah, I see, it is my friend the Jabberwock helping with some translations. I told him to go away as the apparition on the wall did not seem to understand and was making no sound or movement, but wait, I believe it is changing its appearance. The dark splurges are growing and spreading, but the head remains. It is definitely becoming very threatening. I had some carrots left from dinner and put them on the table below where the monster was hovering. Perhaps feeding him will improve his state of mind, assuming that he has a state of mind of course.

“Look, yummy, yummy carrots, nice chewy chewy and good for all monsters on a search for a reason to be.”

There was no answer, it just stared with its eye. I was beginning to be worried, what if it was a carnivore and not a vegetarian and was waiting for a chance to pounce. Perhaps it would only eat human meat. I noticed its transparency and it seemed to have a dark something in its insides which was moving and changing. It was probably being devoured by the stomach juices of the host. I was sure they had arrived. I remember yesterday evening we had quite strong storm. The skies were illuminated by red and white flashes, and thunder could be heard. I remember seeing a strange object saiiling through the sky on a tree branch, or was it a broom stick. I checked, but it was not Walpurgis night, that would be end of April (I always check these important things) and halloween arrives in a few months.

Suddenly it disappeared, just like that. It was gone, it had decided not to feed on my soul or body, perhaps it had discovered something more substantial and filling.

“What are you doing Mr. Swiss?” I asked as he appeared outside on the patio.

“Are you really comfortable in that bright sunshine. I closed the sun blind, the sun was reflecting on the wall. I don’t know how you can concentrate in that dazzling light.”

Ok, Mr. Swiss always knows better. The monster had been banned and returned to the place where the sun does not shine. And the evil eye, that was just a mark on the wall.