And another dig into our private lives. I am still here, Mr. Swiss is still here and my various offspring are also in contact. Life goes on and what happens ever after – who knows. I might write a blog entitled “From the grave” and will let you know. 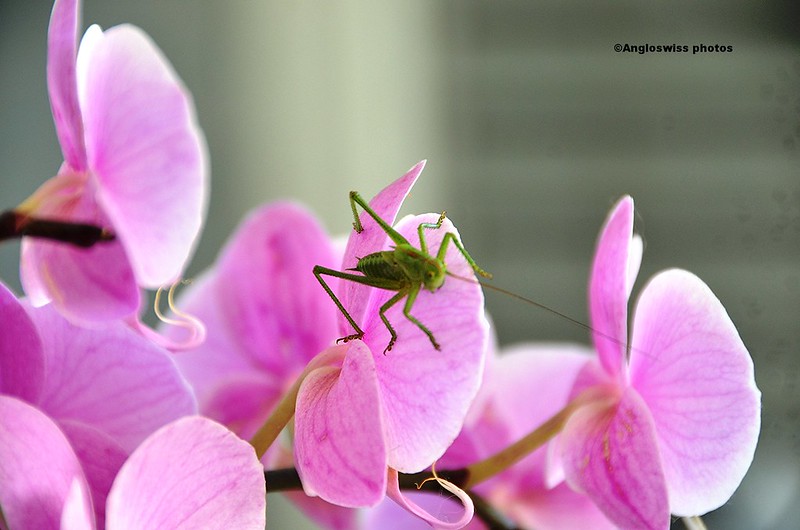 “What about you Mr. Grasshopper.”

“Are you living happily every after.?

“After what, after the last jump? At the moment things are fine. I feel like the King Grasshopper balancing on a orchid. Much better than a common grass stalk or even a thistle. Shall I smile for a photo?”

“Oh yes, that would be great, if you could turn a little so that I can capture the expression on your face.”

“Perfect. Will you be hanging around long.”

“I think so, we grasshoppers do not stress so much. Those hops use up too much energy and the view is quite good from up here.

Yes at the moment the heat wave has hit us in Switzerland. The snow is melting on the mountain tops and the cows are wishing they had a zip to take off their coats. I heard there was a revolt in the nearby cow shed, the cows refused to go out into the pastures. It was too hot. The farmer tried his best by tempting them with fresh mown grass, but the cows said no way. It was cooler in the barn and in any case “Spring has almost gone and we are still waiting for the bull*.

“The bull of course. Bulls always visit us cows in Spring to do their duty.”

“No way Buttercup” said the farmer “those days have gone, we don’t have room for the bulls, we leave it up to the vet.”

“Did anyone ask us. Dandelion is frustrated, so is Daisy, not to mention myself. We want a bull.”

And so all the cows mooed together the words “We want a bull.”

They were not living very happily after then, that was until Ranger arrived. Actually he had been around for some time and managed to escape when they wanted to pick him up for the breeding station. He decided he wanted the real thing and not a machine. He had been hiding up in the hills and he felt the Spring in his bones etc. One dark night he smelt cow(s) and so he decided to follow his nose.

He arrived at the barn and saw them, there were six frustrated cows all longing for a male of the species and so Ranger decided to do his job. The next morning the farmer visited the cows to let them out onto the pasture but they were still sleeping. In the middle Ranger was also sleeping in the arms of Buttercup the poor bull was tired but happy and so were the cows.

Oh yes, the cows lived happily ever after and some months later the calves arrived. There was a slight disagreement about the milking times with the farmer and the cows refused to give their milk for human consumption until the farmer promised that the first milk in the day would be given to the calves.

And there we have it – a silly story about living happily after. Did I tell you about the Jabberwocky living wogglebog happily after with the bandersnatch in the brillig tovy wab. that is another story. Will tell that one next year or the year after when this prompt reappears again.

Daily Prompt: Happily ever after – of course