Tell us about your favourite way to get lost in a simple activity — running, chopping vegetables, folding laundry, whatever. What’s it like when you’re in “the zone”? 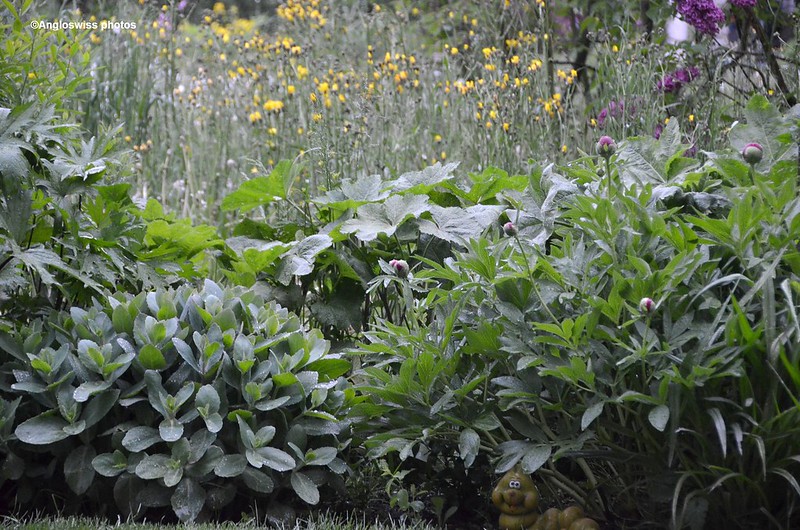 I am now in “The Zone” sitting on the porch and writing my daily prompt, you can see the view from the table on the porch. It is the view over my garden to the rough pasture beyond where the wild yellow flowers are. We have an unwritten law where I live. Yes, there are many unwritten laws in Switzerland, so many that I will not bore you with the list.

However, this particular unwritten law is that this rough pasture must grow until mid July. No lawn mower, no scythe, not even the grim reaper is allowed to put a foot in this area. It is reserved for the birds and the bees, the snails and the mice. Even the spiders have this paradise to themselves. The flowers grow unheeded, they flower and make their seeds and if they do the job properly the seeds fall onto the fertile ground by mid July.

The zone remains untouched until the gardening team arrive with their instruments and cut the plants to lawn level. This is an ideal circle of nature, left to its own device. Unfortunately this year the human factor made a mistake. We have a new neighbour who moved in at the beginning of the year. Unfortunately no-one told him of this holy territory where no agricultural instruments are allowed to invade. until mid July. Already in March he cut his own lawn as it had begun to grow. We were all cutting our own private grass areas, this was no problem. It was then that we noticed that his lawn mower moved over the borders of his private zone and he removed the beginnings of what was to become a future rough pasture. The growing dandelions, clover and other unknown plants were nipped not in the bud, but in the first leaves that were showing.

We noticed this zone invasion too late, and as human nature is, no-one said anything. The neighbour was happy with his nice neat lawn, which was no longer in his zone and no-one wanted to hurt his feelings. This crime all happened in his own part of the zone. Our zone remain untouched and the plants grew and thrived and we were happy until…. One day the neighbour mowed his lawn again. Not being content with breaking his own part of the unwritten law, his lawn mower decided to remove that part belonging to our zone, because no-one told him it was not permitted.

At the time I was arising from my midday golden oldie sleep and heard the very near sounds of a lawn mower on its destructive path. Our new neighbour was happily removing the remainder of this natural rough pasture. The birds and the bees were looking on with disappointment in their wings and the slugs and insects scattered in retreat before their little feet or slimy body parts became a victim of the cutters on the lawn mower.

Mrs. Angloswiss to the rescue. I cannot keep my big mouth shut and approached the happy neighbour who was carried away by turning a meadow into a desert. I was naturally nice and told him that it was actually not allowed to cut this part of our territory. It was a forbidden zone until mid July, but I also understood that probably no-one informed him of this unwritten law. He told me he did not know this and was very sorry, but no-one told him. The deed is now done and we now have a long bare patch next to our garden. Luckily he did not progress over the borderline between our zone and the zone belonging to the building opposite where our cat-hating neighbour lives. She does not like our felines as they sometimes mistake her flowerbed construction, which resembles a snake pit, for a feline recycling area. She also does not like naked cats. One of our neighbours has a sphinx cat which has no fur, and she hunted the poor defenceless feline away muttering something about naked cats being not wanted in her zone.

Now peace reigns in the area. The neighbour promised that next year he would not touch the plants growing in the zone, although I very much doubt if anything will grow next year as the possibility of fresh seeds growing has now been removed.

And so we return to our normal conditions with the motto that ignorance is bliss if no-one told you.