What does your ideal community look like? How is it organised, and how is community life structured? What values does the community share?

Ideal communities are boring, everyone doing what they are supposed to do within set rules. Organisation is also boring, and does not work in any case and now to structure community life. WordPress have the solution, just repeat everything when the ideas are exhausted. I was really surprised that they dared to bring such a prompt and it would be a good idea if they took a leaf out of their own book and discovered the values we want on a daily prompt. 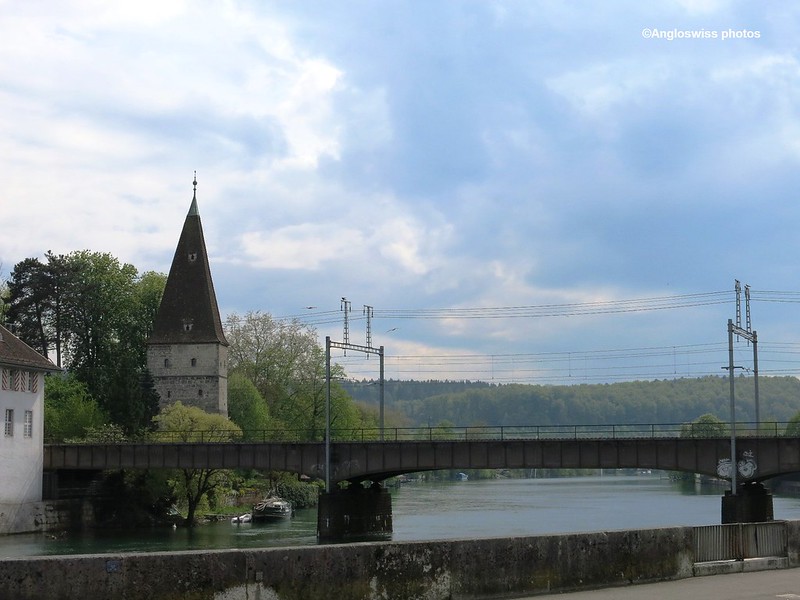 I was in town last week to pay a long due visit to the hairdresser. This visit was organised because I had to make an appointment. When I arrived I discovered a small community life of other victims waiting, as I, for a new look. On the way to the hairdresser I called in at the local town supermarket for a few bits and pieces and had to cross the river so naturally, armed with my camera I took a photo.

This photo shows the train bridge, the last bridge westwards in the town of Solothurn. It is the main line between Geneva at one end and Zürich at the other and you can see on the left our famous wonky tower.

This tower was finished in 1464 and was found necessary to ward off attacks from some sort of enemies which originated in France, so Wikipedia tells me. It is surprising that the tower is still standing. Did the architect drink too much mead when he designed it, or did someone push him as he was drawing the plan for the tower. There are many open questions. As I was standing on the bank of the River Aar planning my prize winning photograph a gentleman approached me, a few years younger than myself (which is not difficult today) and greeted me and said “you are taking photos” which was fairly obvious as I did have a camera in my hand.

“I am always taking photos when in town” I answered. I am a very social person and love to engage in conversations. Mr. Swiss finds I overdo this aspect of socialising some times.

“Do you know that the tower is not actually wonky?”

I answered “It looks very wonky to me.” and I was now ready for the explanation. The man was glad to have found someone showing interest in the history of Solothurn’s wonky tower and as he was a senior citizen as I am, probably had nothing better to do with his time.

“No it is not wonky” he continued “the middle point of the tower was put in the wrong place and when the side faces of the tower were completed it was noticed that the tower gave an overall impression of being out of proportion.”

There we have it, the baroque town of Solothurn has a wonky tower, known as “Chrummturm” in the local dialect and it was just a proportional mistake. I must admit it has been standing for many years, a local landmark, and unfortunately never reached the fame of the leaning tower of Pisa. I say unfortunately, as if it did, Solothurn would become famous. It would be a question in the general knowledge books “Which town has a wonky/leaning tower”, answer being Solothurn, Switzerland overtaking Pisa in its fame.

It seems that the ground plot of the tower shows an irregular pentagon based on a square area and the reason for the wonkyness is to be found due to the fact that four sides of the five sides of the tower are scalene triangles and thus it looks wonky. If you understand that, it is perfect, but I translated it myself from a German text and the word “scalene” is completely new in my vocabulary.

Anyhow it filled a boring prompt for today and if you want to make it suit the prompt, it shows that our community is wonky, but we talk to each other about it, especially if you are taking a photo.

I am now off to the River Aar, hoping to take a few photos of the high water levels we have after a week of Swiss monsoon rain. If I am not here tomorrow, I fell in.