Think of a topic or issue about which you’ve switched your opinion. Why the change?

Yes, there is a topic, even an issue that I have definitely switched my opinion, but for lack of something else I am still doing it. Now what am I talking about? The Daily Prompt of course. I thought this was a good thing when I found it some 3-4 years ago. At last something to encourage my grey cells to develop and tell everyone all about it. Unfortunately since a year the powers that be have switched their opinions and decided that this daily prompt is only for newbies The regular, faithful followers are not interesting, so let’s ignore them, they might go away.

I have not gone away and am still here, are you listening Daily Prompt, so do a flip flop and something original. Since they discovered the Grid they think they are the cat’s whiskers. I have a strange suspicion that if they did a new prompt it would not work, because they no longer know how to put a new prompt on the grid. How often have we seen “0” answers and a blank grid? Are you reading me Daily prompt? 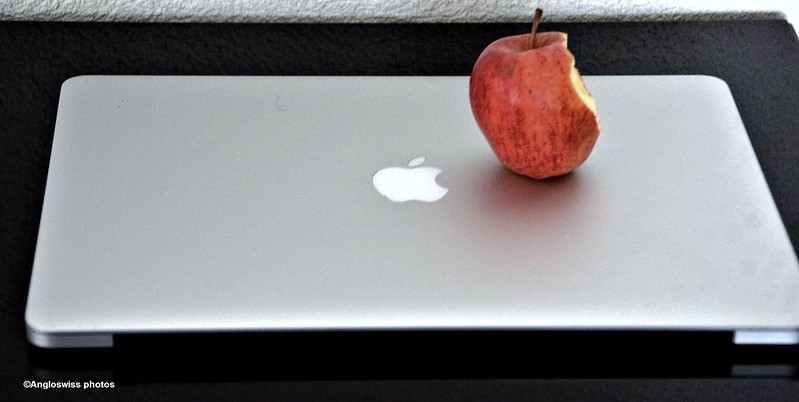 And now to something completely different, otherwise I will get an attack of depression doing this daily rechurned prompt again.

As you can see I am the proud possessor of an Apple computer. One of my flip flops of the past year. I know I have blogged about this before, but Daily Prompt want us to repeat our blogs, however, you can always say something different. It was one memorable day when Mr. Swiss was let out on his own and lo and behold saw a special offer for the smaller MacBooks in a local store. He pounced and bought one and brought it home. He had never applied his IT knowledge on an apple computer and neither had I. He spent a day working things out and I spent the next week working things out, with the result that I was convinced and Mr. Swiss organised this new arrival for I, me and myself.

Was I happy? Yes, I had found the answer to my computer dreams, although my Acer Windows was still in perfect condition for its 2 years.I then began explorations into the realm of Apple and discovered that there was a bigger, better version of this Macbook and that my local supermarket computer department had these models. Another week passed and I had ordered my super new Macbook with all mod cons which you can see in the photo. They are not cheap and I did not even received a kilo of apples when it was delivered. I had to take my own bite out of one of my apples to take the perfect photo.

I no longer have “Word” but “Pages” and I have everything at my computerised finger tips. It all opens as a tab, I have apps to download and I can automatically update my Yosemite programme with no problem when Apple invites me to do it. I am a happy bunny. However I believe there are some unfortunate people in this vast computer world that I have disappointed. Do you ever receive those unwanted telephone calls?

That is the first question I have when I answer the telephone. I say a clear “Yes”, but this person speaking with a very heavy Indian/Chinese accent, does not seem to speak the same english that I speak and so he says again “Do you speak english?”. I increase the decibels in my voice, which is already breaking the sonic barrier, and he hears my clear “Yes”. Now the conversation becomes something serious.

“I am calling from Microsoft, please go to your computer.”

“I have an Apple computer” I say with pride.

A few seconds of silence now exist until the next question on the caller’s list is applied.”

“Do you have other computers?”

This is now becoming dangerous I discover. Before I tell him we have many computers and he asks me to go to my computer again, I tell him that Microsoft do not make calls to their customers and “You are a scam” was the answer I gave two days ago.

The caller did not cry, or apologise, no, he told me that “you mother is a scam, your father is a scam and your children are a scam” and he hung up. I think I annoyed him.

Was I being impolite? I did not have a guilty conscience, but had an inner feeling of satisfaction being able to be impolite with no guilty feelings.

The next morning at around the same time the telephone rang again. I was asked if I spoke english, but this time the caller sounded almost American. However I was ready with my usual answer which was “Yes”. He again requested that I go to my computer, and I again told him it is an Apple. He was again at question No. 3 on the list and when I told him I have an Apple he naturally asked about my other computers. This time I had a different answer and told him “it is none of your business”. He hung the telephone up, so I assumed that this was a Microsoft person with more experience.

I know they want to get into my computer and discover all my secrets. Mr. Swiss has also received these calls, but his normal answer is “I am not interested” and he terminates the conversation with a few profanities. He does not enjoy these changes in the daily routine. I love them, I am now going to compile a list of answers to annoy these Microsoft parasites I think. Oh to do a flip flop with a computer, so rewarding.