When the full moon happens, you turn into a person who’s the opposite of who you normally are. Describe this new you. 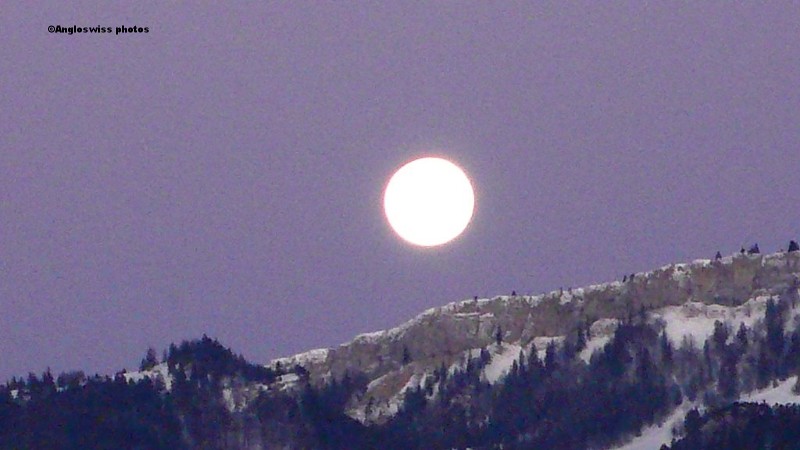 There are photographers amongst us that can take a perfect photo of the moon showing all the craters, shadows of moon mountains and all with clear sharp outlines. Unfortunately I am not one of these photographers. My camera will not oblige and this is the best I can do. As it shows the snow covered Jura mountains from the village of Bellach, where I worked, I probably took it one evening in Winter with my point and shoot camera before leaving for home. Actually I think my perfect concentration was broken by the howling of the various wolves and dogs as I was trying to concentrate on the photo.

There is a new me every day, I do not need a full moon. Each day I awake and notice that something else is not working properly. It might be an arm or a leg that was laying in a wrong position during the night, cutting off the blood supply. This is no problem, a few movements, massage and hope and everything returns to normal, although normal is an overstatement.

The next problem is arising. The moon arises regularly, in various sizes and shapes, but I have to think about it. So what more can I say. I might howl, might have long pointed corner teeth and may dress differently, having a preference for long black garments. I seem to develop a taste for red liquids and am a regular customer at the local blood bank. I can even fly, my main route being towards the local cemetery where I meet with all my colleagues who have the same full moon symptoms. Notice I said “symptoms” and not “problems”. Those amongst us with similar signs, know what I mean. And now for something completely different, after all I did this all once before on 20th August 2013. 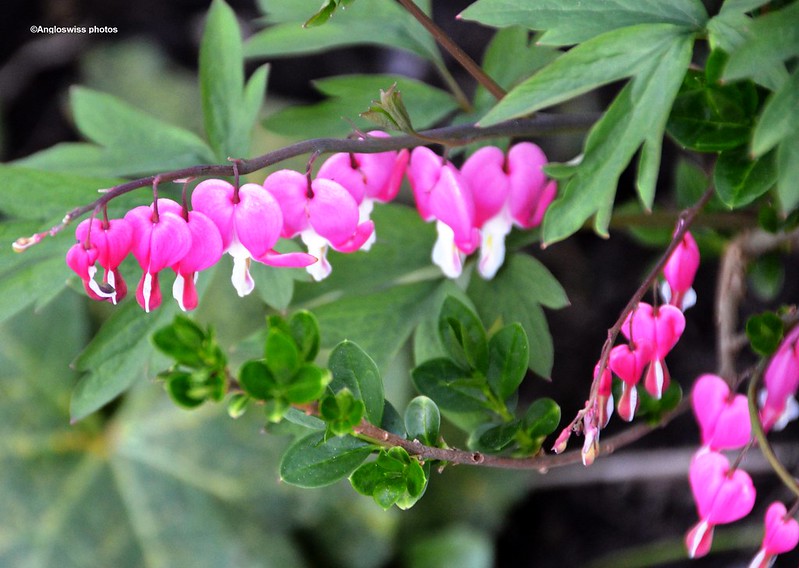 I think these flowers are known as Bleeding Heart, so we are back to the full moon signals. They did not appear after a full moon night in my garden, but they just appeared for no reason. I did not buy them and I have a strong suspicion that my neighbour told their seeds to transplant themselves in my garden as she had an example of this plant in her back garden. The first appearance was about ten years ago when I saw some unknown leaves growing. Was it a weed or was it something worth looking after? I decided to be patient and the first two or three flowers on a stalk appeared, so I decided to let it stay. It was one of the first plants to flower in the garden in April.

The following year it appeared again and so I decided to risk a transplant and shifted it to my front garden. Then the action began. My neighbour no longer has this plant in her garden, but I now have two. They seem to be very happy to spread. I now have a second example growing next to a bush. I have now discovered that our local supermarket sells the Bleeding Heart plant for about ten swiss francs per pot, but I will not tell the neighbour. These are now exclusive in my estate. I tried to replant it last year, but it refused and my replant died, but this year it appeared again next to the bush.

And in the hope of a new, fresh, something completely different prompt tomorrow I will leave you all. Have fun and just don’t bite anyone on a full moon night, they might not taste so good.

Daily Prompt: The Full Moon and Other Things