Do you have animals in your life? If yes, what do they mean to you? If no, why have you opted not to?

I find that a silly question, it insults my intelliegence. 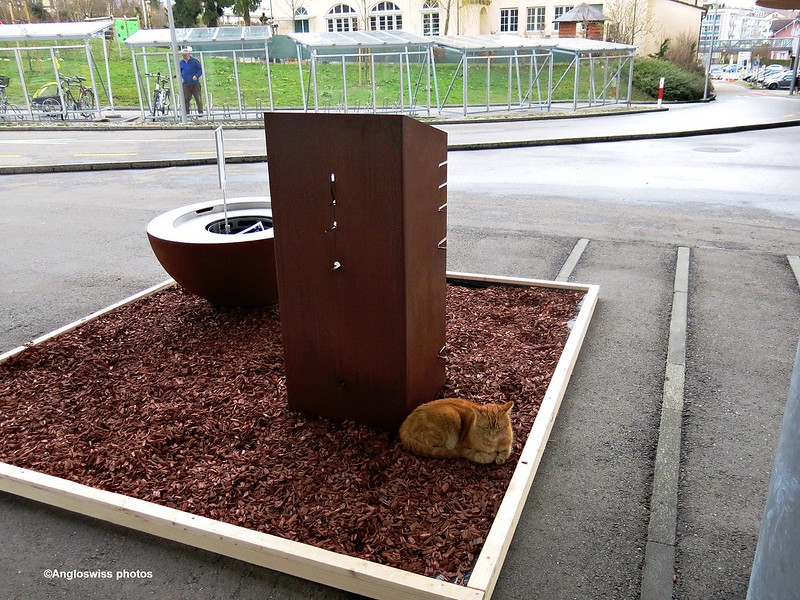 I have animals everywhere, even when I go shopping. See our supermarket feline watching as the people arrive to shop. They had an exhibit outside showing how you can have a nice cozy b-b-que in the garden with all the trimmings, but the feline moved in and took over. This felines have now become so well-known that a national free newspaper known as “20 Minutes”. have featured them. Apparently there are 2 of the species, both being of the Ginger race. Here is a link to the article The Supermarket Cats, in our local language, German, which I have partially translated. I myself have many photos of the two felines and it seems they have names, Max and Hugo.

It seems that even the police have been called in as there are days when they feel so comfortable in the various departments, especially the bed and bathroom areas, that they do not go home and remain unnoticed.The supermarket has an alarm when it is closed and the felines tend to take a walk when they are left to themselves which gives a signal at the local police station and so the police have to investigate.

However  they are shop trained cats, do not smell and visit the outside parks for their recycling process. They also realise that they are not welcome in the food department. They live in one of the neighbouring houses and Mr. Swiss and I have often watched them on their way home. They walk across the large car park, wait until the entry road is free and cross to jump over the fence into the garden of one of the houses. Their favourite place in the supermarket definitely seems to be the restaurant where they make themselves comfortable on a seat and wait for a few edible rewards.

Otherwise I am allowed to live with two felines, Tabby and Fluffy. There was a third, Nera, but she left us last year for another dimension. My felines have their own site in WordPress where they daily report the happenings in their lives and in the casa Angloswiss The Cat Chronicles.

I don’t want to earn bonus points for adorable animal photos or double bonus if taken with my phone. I have a perfectly good DSLR Nikon camera and a Canon camera so rarely use my phone. I am actually surrounded by animals. My main animal in my collection is Mr. Swiss without who I would be lost. Our neighbours have cats. I once counted 10 cats in the area where I live. There are only a few dogs which generally stay at home unless they go for walks with their masters. We have a path crossing our area which is the dog walkie path, but only if they are on the lead. We have enough forests and country to let them loose.

A five minute walk brings us to a stable where there are approximately 8 horses at the moment and cows outnumber the population. We have a murder of crows (I know, but that is the collective name for crows it seems) that like to go on collective flights waking up the neighbourhood. We have many hedgehogs. When No. 2 son lived at home, in the far gone days, Friday and Saturday nights were the night out and he would return home in the early morning hours. He told us that there was an array of hedgehogs (another collective name I did not know) around our home. Lately Mr. Swiss has reported the sighting of the regular visit of a hedgehog on our patio. It seems that Tabby our chief feline, sits on a chair on the porch and watches the movements from a distance. There has been no fraternisation up to now. I think hedgehogs are not a feline thing. I am naturally waiting for the chance to take a prize winning photo, but I am not as nocturnal as hedgehogs.

And so as the golden sun sinks slowly in the West, I come to the close of a repeat prompt, but being me I am never lost for words. See you all on the flip side tomorrow.

Daily Prompt: Menagerie – I live in one