Do you love hot and spicy foods or do you avoid them for fear of what tomorrow might bring?

I like hot and spicy foods and how am I supposed to know what tomorrow might bring. Perhaps I might be hit by a thunderbolt, be run over on the road by a cow (we live in the country) and the worst case scene would of course be a heart attack, caused by too many red chilli in the chilli con carne, which I will be cooking tomorrow evening. It could also be that tomorrow is the end of the world, although at the moment the sun is shining and we have pleasant temperatures.

And now to continue with something completely different, more sensible and interesting I hope. 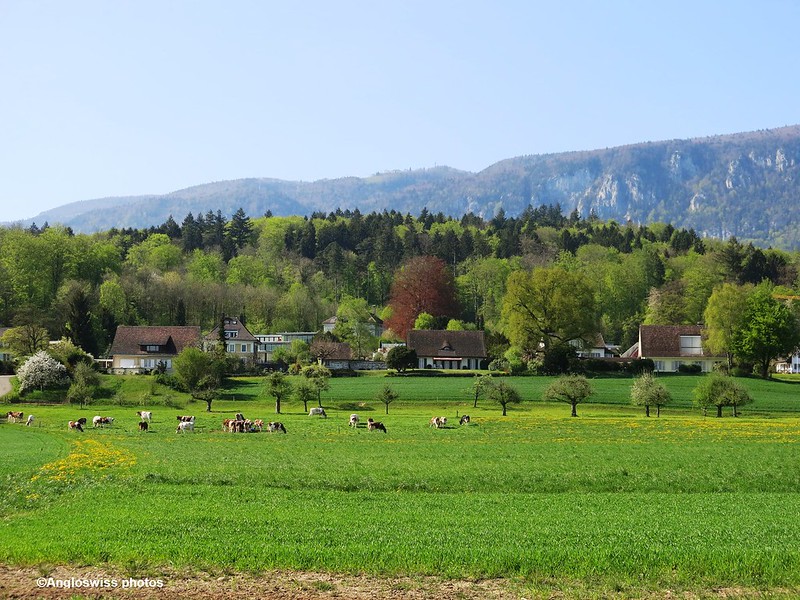 Yesterday my partner in crime, Mr. Swiss, invited me to a walk. He found I had been cooped up long enough inside curing my cold and now it was warmer so it was time to do it again. He said even the cows were now let out of the sheds and are roaming the prairies of Switzerland. I decided to risk the fresh air and when such a good looking young man sends you an invite you have to accept especially when you are compared to a cow.

I dragged myself into three-quarter length trousers and a t-shirt with seven mile shoes and we were on our way. It was a carefully planned route, not too far, as Mr. Swiss was also feeling some symptoms of age (so he said) and there they were. At a distance but the cows were in the field. I could hear them from the path.

“Look Bluebell, fresh grass and even some daisies in between. This is the real thing. None of that hay stuff.”

“Then don’t drop your recycling process on the fresh grass Buttercup if we are going to munch it. That really spoils my appetite.”

“Then go and eat some grass in another place. I drop my digested remains where I want to. Look the first flies are laying their eggs in it, how sweet.”

“Yuck, and I am supposed to eat it. You are spoiling my first day out. Look Mrs. Angloswiss is on the path with Mr. Swiss and she has a camera. Smile Buttercup, we might make it on a Daily Prompt.”

“You think so, they are not interested in nature, just making profits on their web site. On the other hand it will show all those nice friendly daily prompters that we have survived another snowy and cold Winter and are ready to go.”

And after taking a few photos we moved on to the cemetery. If you want quiet surroundings a cemetery is always a good place to sit and rest. I did see two other visitors, otherwise we had the whole place to ourselves which was quite good as we had no disturbances when taking photos. Time flies when you are visiting fun places and we decided to take the long walk home eventually. It would have been faster to branch onto the sidewalk on the main road, but we do not like this way. Too much noise and traffic and no cows or other livestock. We returned through the cemetery and then we saw Buttercup and Bluebell on their way home. Actually the complete herd was on its way home accompanied by its Chief Drover who had a remarkable likeness to a bloke known as Gil Favour from the old Rawhide series on the television.

Perhaps the cows were not going home, but were on their way to better pastures on the other side of Switzerland. On the other hand it seems that Switzerland has so many cows, they were better staying where they were.

Cows are very obedient animals and they filed in a neat row back to the ranch, one after the other. Of course I could not resist another photo. I spoke to the ranger in charge, and he told me that the next time he would let the cows graze in a field nearer to my camera, for some closeups. Here they are going home. 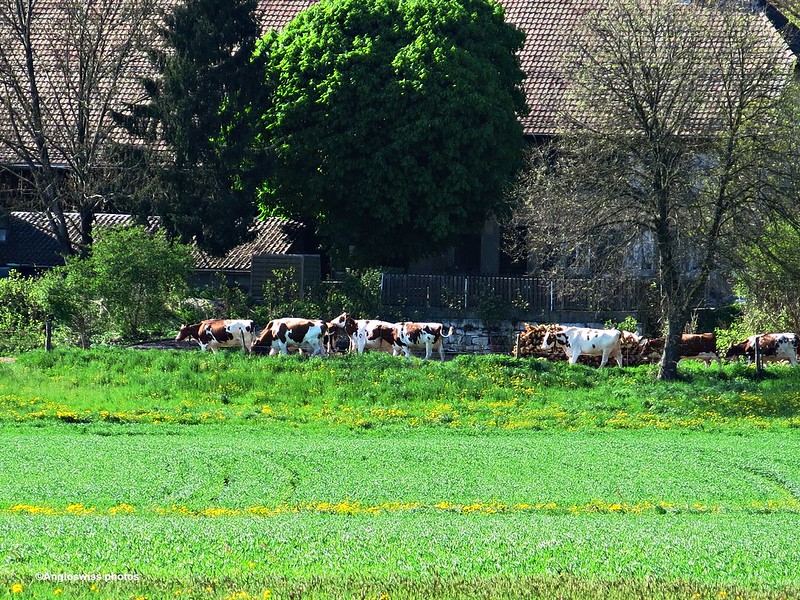