Write about anything you’d like, but make sure that all seven colors of the rainbow — red, orange, yellow, green, blue, indigo, violet — make an appearance in the post, either through word or image. 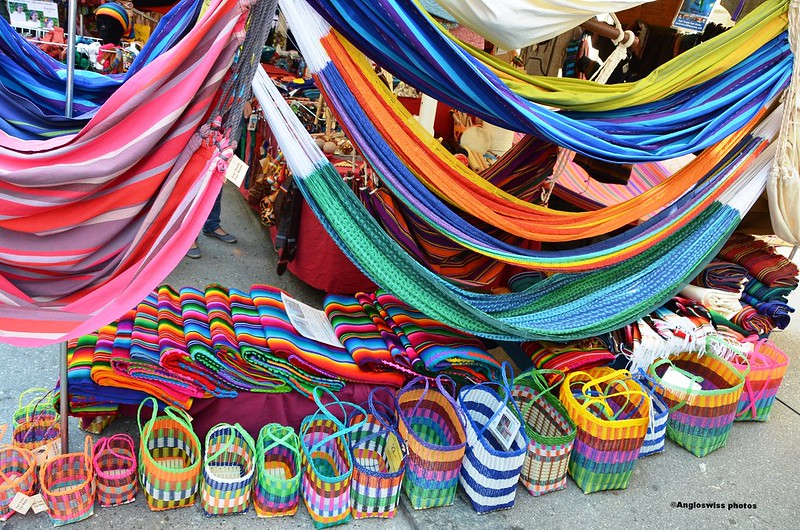 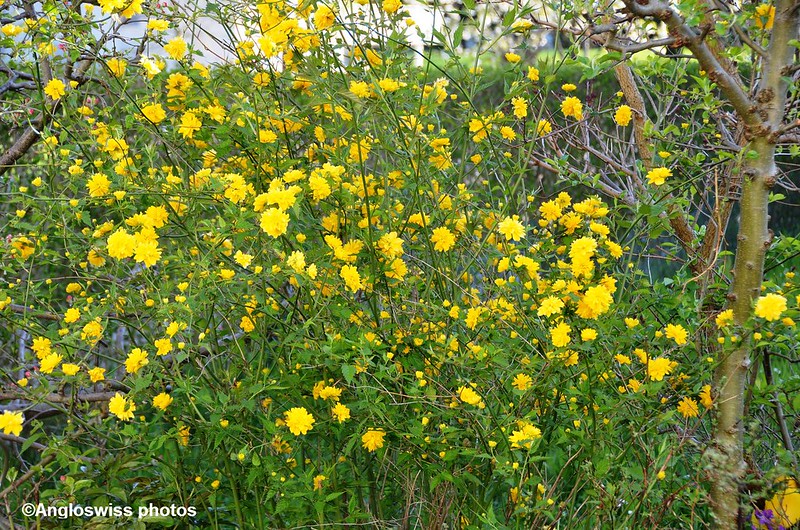 As I have not been well enough to venture on a hiking crusade lately I have to be content with what my garden has to offer in the photography department. People that take walks in the countryside coughing and spluttering are not so inviting.

My Kerria Japonica is now flowering. It is one of the first to say “hello Spring is here”. There is a little story behind this bush. As well as being just a member of our local first aid group in the village, I was also on the committee, being the accountant. I must admit that accountancy was never my thing, but amongst the golden oldies of our group I was one of the few that had worked in an office and actually knew what excel was. The lady doing the accounts chose me as her successor. I said something like “I will have to see about it and let you know”, but somehow these words were forgotten and no-one asked me or told me that I was doing the job permanently.

I was keeping track of where the money was going in our group and what was entering. I did not like the job, I was warned by a certain person who had made his own experiences of taking over such responsibility. “You know you cannot make mistakes and you have to answer for every cent in the till” how right these words were. Once a year I was subjected to an audit where everything was turned over twice or three times, probably to ensure that I was not making off with a fortune by cooking the books. I must admit it mostly turned out well, but I hated the end of the year when I had to do the final accounts. This was combined with our annual Christmas party when I had to organise payments to our members for various tasks they had performed throughout the year.

Once a year we had the annual general meeting accompanied with a meal at the local restaurant and on one of these memorable occasions I was presented with a gift voucher for the local gardening centre for my efforts, at least I think that was the reason. With this voucher I bought my Kerria Japonica. I planted it in the garden, next to my blackberries and raspberries. My Kerria was not happy sharing her beauty hidden between the berries. We had a redo on the garden and I transplanted it to the edge where it has lived for the past years. My first mistake was to cut it back after it had finished flowering as the next year I was lucky to have four flowers. Now I just leave it to expand and it seems very happy.

A little more than a year ago I was in England helping my dad to move from his house to sheltered accommodation and I noticed in the area of London where he was, Dagenham, that there were many of these bushes in flower. It has become a plant that I associate with the first signs of spring.

I left our local first aid society when I retired from work. I decided my days of accepting responsibilities were finished. I am now a golden oldie and do what I want to do and not what I have to. My successor is doing a very good job. I often meet some of the members as they live in my village or the next village. One thing I am a little proud of was the introduction of the www pages in Internet. I had just completed a web assistant course and asked if they would like a web site. “Oh yes” and a week later I was asked if it was up and running. I explained that web sites were not built in a day, at least the ones I made, but towards the end of the year we had our web site, of my own design. I did it for a couple of years and we were lucky to have a new member who ran his own computer company in his working life, so he took it over and it is still alive.

I learnt one thing from this exercise “do not say yes every time someone asks you for a favour”. I now let the others get on with it, but I have my Kerria Japonica as one good memory.

Photos and Stories behind them: My Kerria Japonica – Day 3