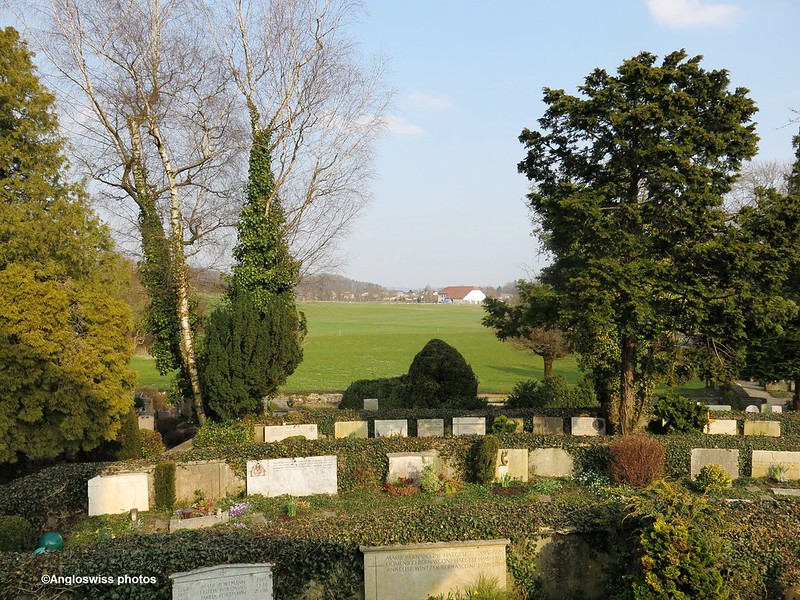 When you live in a small Swiss village nothing is far away. It is very compact, and we have everything you need: a restaurant, church and a cemetery. Shops – there are none; the last grocery closed 5-6 years ago and no-one bothered to re-open it. We all have refrigerators and the next town is a mere five minute drive or 30 minute walk, so what could possibly be better.

Cemeteries are an occurrence in all Swiss villages and towns. We have the larger local town cemetery along the road, but why go so far when the village has a cemetery, surrounding the local church. The church is on a small rise so if you poise with your camera you have an overall view of part of the cemetery. We have a few well known local residents, but they have the special places reserved around the church on the top of the hill. For those who live their lives almost unnoticed, there is a neat section below the church.

The stones are nicely arranged and are cared for. I often think in Switzerland that the cemetery is the calling card of the village. If you have a neat cemetery, then the village is also organised. Of course, many names on the graves are familiar, but it is perhaps a peculiarity of Switzerland that names become associated with places. If I mention my married name of “Gerber” the comment will immediately be made “from Langnau In Emmental?” and of course I can proudly nod and say yes. The name Gerber occupies about 99% of the names in the Langnau telephone book, so it is not surprising, although I would add there is a tribe of Gerbers originating in the Bernese Overland, but they are not our Gerbers. Some of use even decided to throw out their roots across the pond in a place called America. I don’t even think they were United States at that time.

So back to the village of Feldbrunnen, where I live. The church would be Catholic, but we are all equal eventually and so we have a mixed bunch on the cemetery. I do not have family members here, as they were living in other surrounding villages, but I do have a few neighbours.

I quite appreciate the way the cemetery is designed, with fields and farmland. The white building you see on the right bordered by a tree is the local stables where I often take a photographic journey.

Now and again, when perhaps a new house or apartments are being built, it might be that a few skeletal remains are found of various departed that did not arrive at the cemetery. These originate from the days when the village was just a few farms and not really a village and was also a place for the so-called chopping block or gallows. As it seemed that the victims were criminals and in the eyes of the church at the time, did not really deserve a place in the cemetery, they were buried were they arrived, somewhere in the middle of a field, to be discovered and examined by the archeologists a couple of hundred years later. At least they get a column in the local newspaper.

So the next time you take a walk in the local cemetery, remember, you are surrounded by history.

Photos and Storeis behind them – The Cemetery, Feldbrunnen