Tell us about a time when you flew into a rage. What is it that made you so incredibly angry? 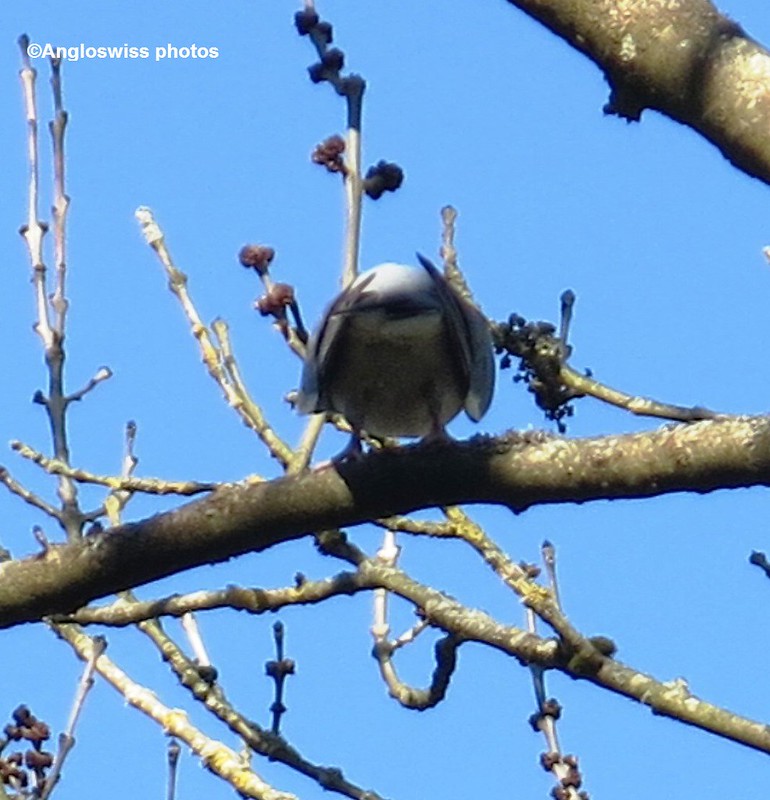 I do not do incredibly angry. I do not even know what incredibly angry is. I was not even annoyed when I uploaded this photo of a large bird and noticed that in that moment when I pressed the shooting button, he had turned his back on me, just my luck.

I only know that for the last 3-4 days some sort of attack has taken place in my physical existence. To be exact, it actually arrived about a week ago after I had been on one of my refreshing walks in the country. At last I was moving again, with a camera hanging around my neck, but physical exercise is good for you so they say, Admittedly there was a fresh, no cold breeze blowing and after leaving the refuge of my home I immediately returned for a warmer jacket. What could possibly go wrong, I was sheltered from the cold wind blowing from the snow swept alps, which are almost 200 kilometres away.

I remember arriving home feeling a little exhausted, but with the knowledge that I had succeeded in doing something for my well being. Admittedly I felt a faint tickling sensation at the back of my throat, but nothing is always perfect. That was the beginning of a week of coughing with all the trimmings. You know the feeling when you retire exhausted in the evening, knowing that there is some sort of germ lurking in the background and it awakes during the night. No longer a tickling sensation, but the real thing. Something is sitting inside your chest, your throat and coughing is a complementary noise to your usual snoring and deep breathing.

You do not actually awake in the morning, because you have not slept. It is just an automatic opening of the eyes and dragging yourself out of the bed, but there are things to be done. All actions are now automatic, just a programme of movements applied over the years. Take a walk with the vacuum cleaner and cough now and again. Mop the floors. Even the trails you leave behind are not straight due to the abrupt movements caused by an almost permanent coughing and pausing to breath. Even breathing is no longer automatic, but has to be planned in advance.

There was even a day when I almost gave up the daily prompt, but I dragged myself to the computer and forced up a photo with a text saying “Help”, although as usual I am not a person for one worded texts. Mr. Swiss is my assistant in such times. He ventured on his own to the supermarket, he saw to my needs. We have wonderful warm summer weather at the moment, ideal for a walk, but I cannot drag my virus attacked framework to walk.

Of course we have an emergency supply of medicine in the home. Tablets for a sore throat, tablets for general improvement of ill feelings. What is annoying is that after measurements with the thermometer, I have no fever, no temperature – basically I am healthy, although I have the feeling that I have swallowed stones which are immovable in my breathing apparatus. Just took a pause for a coughing attack, and other removal of unwanted symptoms. I am not really one to complain, at least not usually, just now and again and why should I be selfish and keep everything to myself. Today a new assisting medicine arrived from the drug store brought by Mr. Swiss. Apparently the saleslady was not sure if she wanted to sell it. She had to read in detail the accompanying leaflet in connection with diabetes. Actually she need not have bothered, it is absolutely diabetes friendly.

It was a depot tablet, remaining in the body for at least 7-8 hours and preventing any attempts to cough or splutter. I am not allowed to drive a car when taking this medicine, but at the moment have no wish to make a long journey anywhere, except for my bed to catch up on lost sleep. Did this tablet work? Sort of, I managed to drift away into the world of dreams for a couple of hours, only to be awoken with a suffocating coughing attack. My body was complaining that I had turned off its right to cough.

Another disadvantage of this attack by some strange new virus, never before experienced by makind, is the effect on my nose. My nose is an important part of my face, it is the first object that you notice when meeting me for the first time. I am proud of my remarkable, somewhat perhaps oversized nose. Unfortunately it is now changing colour from its usual slightly suntanned bronze to  resembling more an overripe strawberry.

So life goes on as usual, cough, cough. I am longing for a night when I can sleep without waking the whole neighbourhood with stifling coughing sounds. Sorry for such a negative report from my neck of the woods, but as you know, misery loves company.

I hope to return tomorrow with positive news from emergency room Angloswiss. I have drops to test during the night, another trophy from the drug store.