Tell us a joke! Knock-knock joke, long story with a unexpected punchline, great zinger — all jokes are welcome!
Why should I tell a joke, Daily Prompt brings them every day in their weak efforts to keep a dying idea alive. And now for something completely different. 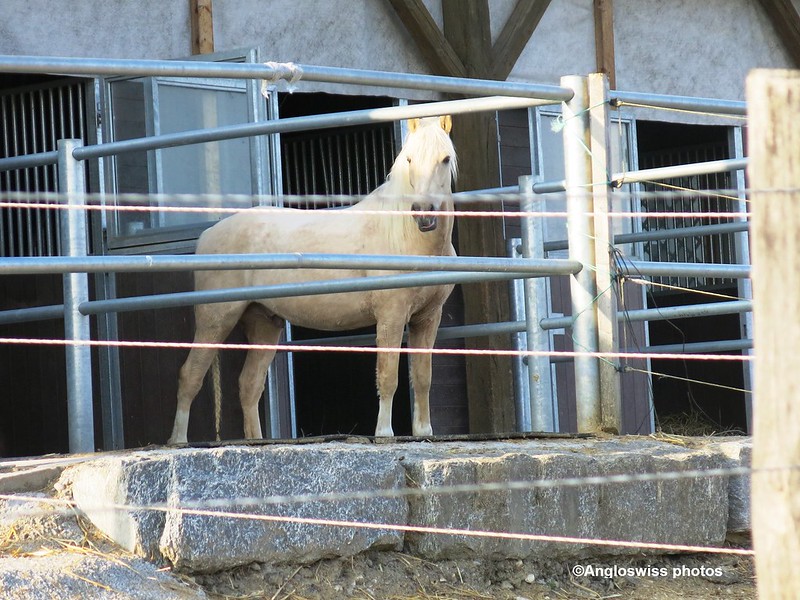 Yesterday we did another five kilometre walk, or was it a little longer. Anyhow no problem, for real professionals like myself what’s in a kilometre? “These legs were built for walking” and so I walk, although I have to fit in a break on a bench now and again, for Mr. Swiss of course. He needs his rest.

We paid a visit to the local stables, armed with my camera, and this interesting horse came out of his box, realising that Mrs. Angloswiss was there and he so wanted to be famous across the pond and other places. The lady who owns the stables informed us that this horse was a fluke of nature. He was supposed to be brown, but arrived a few shades lighter and this is apparently because one of these hereditary genes was involved, being carried through generations and turning up now and again. She told us you get all sorts of mixtures in colour with this particular gene: a white horse mixed with shades of brown in the mane and on the tail for example. 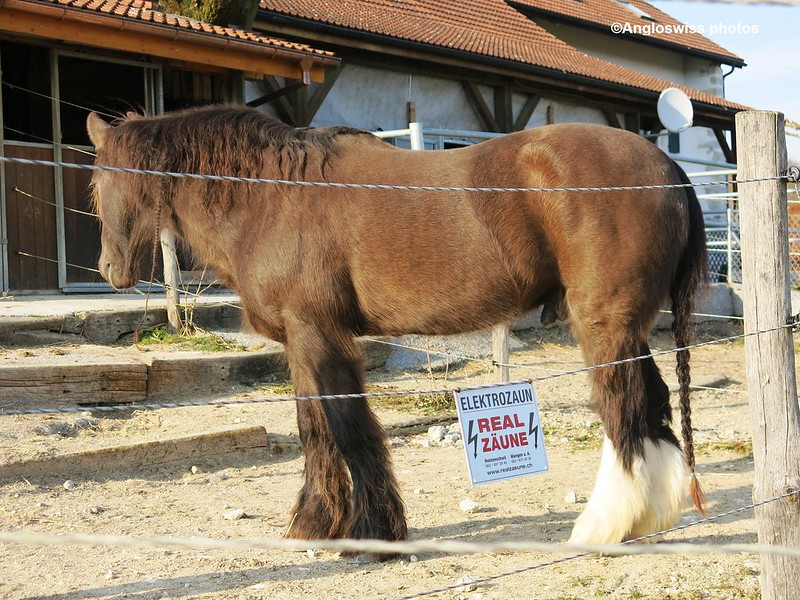 Here is our friend the Shire horse again, who goes by the name of Guiness. He has a white patch above the mouth, like the froth on the well-known Irish beer sort and hence the name. Guinness actually comes from Ireland. The stable lady told us she brought him from Ireland 23 years ago, when he was three years old and has been her faithful companion ever since. He has now been put to pasture to live his remaining days. He is 26 years old, but could reach the age of 30 if everything goes well. Sometimes she lets a child ride him, but otherwise he is no longer the riding horse. They do give riding lessons at the stables and they have an area where you see people going for their daily practice. I said to Mr. Swiss “do you think….” and before I finished the sentence he said a decisive no. My golden oldie years are now too many to learn how to ride a horse, and I never did learn to ride a bicycle. 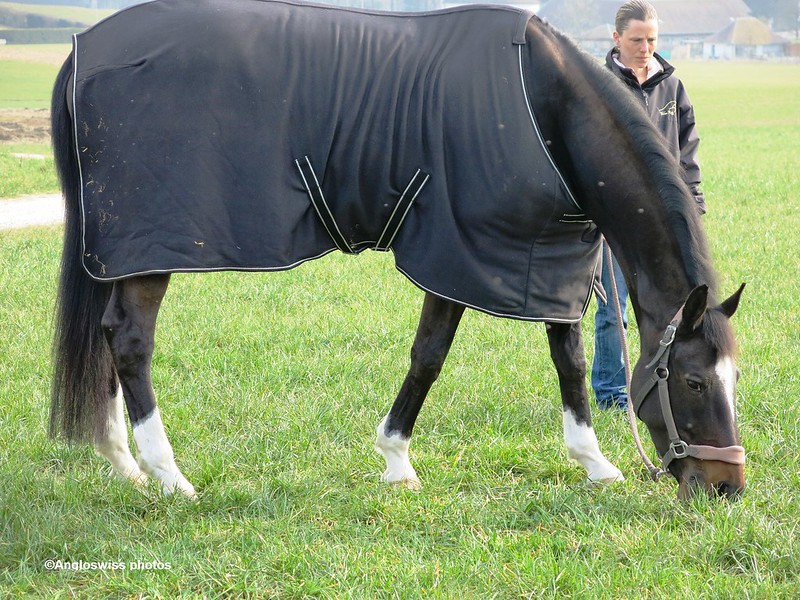 This horse was being taken for a walk on the field, which was the perfect occasion for a photo. I find many perfect occasions for photos, as you may have noticed. Interesting is the white mark on the forehead. I then noticed that there is another horse in the stable with the exact same white mark, somewhat smaller. I was informed by my horse lady that they were mother and daughter – a real horse family.

We are now becoming regular visitors to the stables and when the horses see us coming they leave their boxes, wave with their tails and smile for the camera.

Tomorrow I will surround you with duck and swan photos from one of our hikes along our local river, the River Aar. Actually the river Aar flows through our Kanton/State of Solothurn from the capital city of Bern where it eventually enters the Rive Rhine in east Switzerland. Its source is in the Bernese Alps and it is the longest river completely in Switzerland. It is quite a clean river, has fish and also beavers, in our area, although I have never seen them. Now that would be worth a few photos. If you want to know more, I am sure there is something in Wikipedia.

Daily Prompt: Ha, Ha, Ha – I don’t see the joke, so am writing my own thing as usual