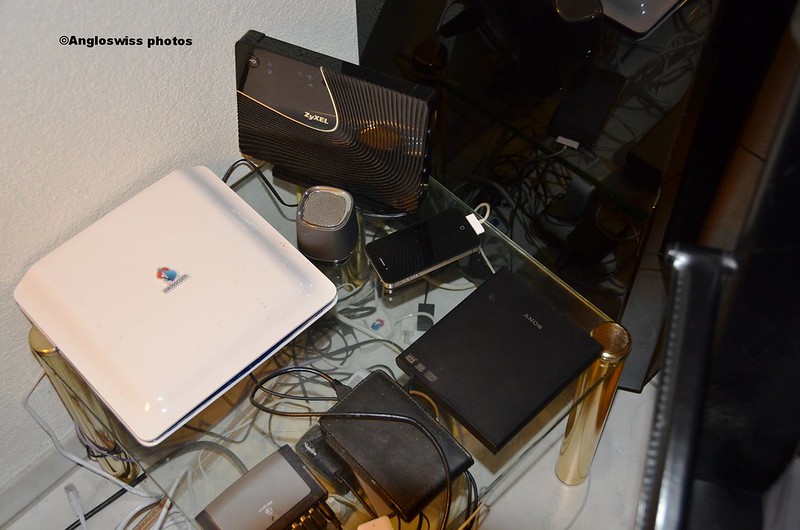 Not a story behind the photo? Of course there is a story behind the photo, my life is one big story. Unfortunately I have not yet met the famous author or movie producer to do the necessary to make me famous. I noticed at a quick glance we have 0 responses for this prompt. Did someone forget to press the magic switch, did Wordy have a little too much of the hard stuff with lunch? Perhaps it is just one of those days where things go wrong all the time. I might be the first with something to say which is a general state of affairs with me. By the time I finish this epic piece of literature others may have beat me to it. Now to the subject of this post.

It is not an easy task and I am a little overstrained with this. Actually it was my blogging friend Marilyn that was guilty of me taking this photo. She is a cyber golden oldie, and if Bill Gates had not been there first, she would now be running all the Windows stuff probably. At the moment she has router problems: don’t we all from time to time. I often lose my way on the roads due to new road signs, although I believe her router is more in the online sense of the word.

I decided yesterday evening to take a quick photo of the external digestive system of our computer. Marilyn got me thinking, where is our router, where is our modem, where is anything like that. I only play with my keyboard and laptop, the rest is a Mr. Swiss department. It all has a nest on a glass table next to his operational centre. Now and again I might lose a connection, which is not so bad. It tends to be a habit with me. Mr. Swiss shakes his head and carries on regardless. If I say no more, it means Apple has found the connection again and I am making a fuss about nothing. If this state of affairs becomes permanent and he also loses the connection, then we have a lost modem wandering around in the Angloswiss cyber world. No problem, he presses a button somewhere and everything is working again. It does not happen often, but now and again it might. I think they make these things just to see if we know what we are doing.

I definitely do not know what I am doing, but Mr. Swiss does. He showed me once where the magical button is, but I forgot. I am diverging from the subject matter. Now I have a photo showing where everything is. I had to ask for directions from Mr. Swiss as all I can see is a white box, a nice designer black box standing up and a few leads and flat boxes.

Apparently we have two modems combined with routers, or did I get that wrong? Anyhow the nice designer black object standing up in the back right corner is a modem it seems and the big white flat square thing is also a modem combined with router. I think the black designer model also has a router combined, but am not sure. It is all so complicated.

We have some other technical stuff with wires leading out of it. There is a DVD burner. I think that is the square black thing at the front in the corner. There is a little square thing in front of the nice black modem which is a blue tooth loudspeaker. The teeth seem to be hidden inside, I suppose I could feed it now and again but I do not know what blue teeth like to chew on. There are two hard disks in the middle at the front laying on top of each other and on the left almost out of the picture there are lots of cables attached to something that might be the heart and lungs of the whole thing, but don’t ask me, it is a man thing. There is also an iPhone somewhere in the middle. It is always a good thing to have a few iPhones laying around, you never know, you might lose one.

So there we have the latest and newest photo in my collection. I notice we still have 0 Responses.

“What is going on in Silicon Valley, the grid has again collapsed.”

“Oh, I will have a look. I am sure it will be working by this evening. There is probably an update on the system, or perhaps we are having some new software fitted. I will have a look after I have finished my chocolate cake.”

“Wordy, put that cake down. We have an urgent situation. Thousands of daily prompt writers have their fingers poised on the upload button and there is nowhere to upload it.”

“You can always try the Reader Mrs. Angloswiss.”

“I could also hold you prisoner in the snow out in the garden holding you to ransom for an efficient grid system that works.”

“But my circuits would freeze and I would become brittle.”

“You think I care, get it working Wordy.”

Daily Prompt: A Moment in Time – there there is a camera, there is a photo to be uploaded

14 thoughts on “Daily Prompt: A Moment in Time – Where there is a camera, there is a photo to be uploaded”