Tell us about the time you rescued someone else (person or animal) from a dangerous situation. What happened? How did you prevail? 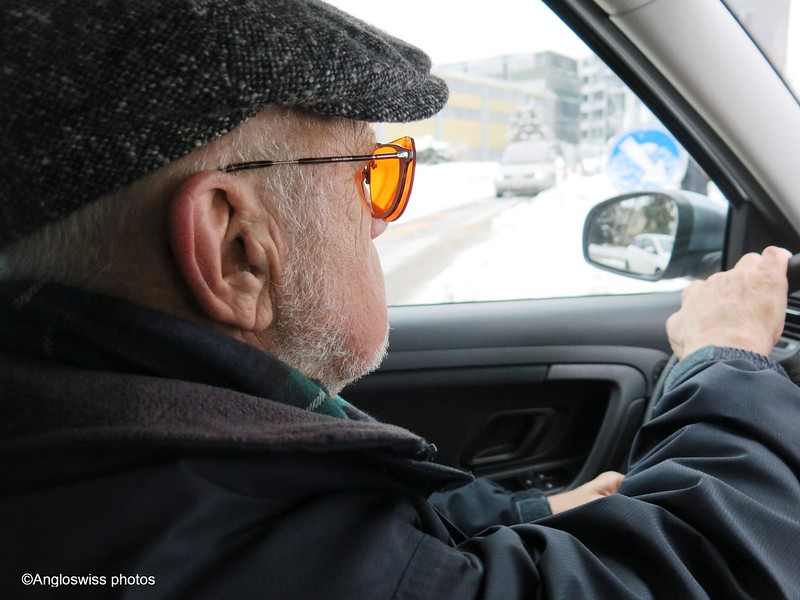 I rescued Mr. Swiss from a dangerous situation by letting him drive the car. If I had been driving the situation would have got really dangerous. Just look out of the window of the car. Do you see the snow covered surface. I do not drive on snow covered surfaces. I am allergic to Winter roads and if I had been driving the scene would have been set for an accident, so Mr. Swiss drove where he had everything under control.

I hate those dished up prompts where it says “tell us about the time”, where amateurs are at work. Do they really think I have nothing better to do than play Superwoman rescuing living creatures from dire straits. I have enough problems rescuing myself. As soon as I begin to move the scene is set. I might fall down and break something, I might slip and knock my head on a door, there are so many possibilities. Living in Switzerland dangerous situations mainly occur when the interest rates drop at the bank, or when gas prices increase, although I remember a situation some years ago.

It was Winter, it was very cold and an ice layer had formed on the streets and road, but an invisible ice layer. I remember it being the days when I was a full time mum with four children at home. I think it was a time when the kids were home on holiday. I remember it being early in the morning when the workers go to their daily work and I was busy in the apartment finishing breakfast. It was pre computer days, otherwise I would probably have missed all the action.

The apartment was a corner block apartment situated on the first floor with sight over a road crossing. Suddenly I heard a mini bang followed by glass splinters falling. I look out of the window and saw a car standing at the traffic light beneath the window and a second car embedded in the front side door of this car. The people involved in this accident were already at the stage of pulling out papers and having a lively discussion, so I decided to watch the developments.

At this moment the traffic lights changed at the intersection and a car came from the main road and decided to turn right into our side road. I then saw the reason for the previous collision. Instead of this car turning, the wheels found no grip on the icy layer and the car carried on at an angle without being able to brake. It did not collide with the two cars that were already entwined but eventually arrived in our side street colliding with a fire hydrant. Now we had three injured cars.

I dressed in my Superwoman t-shirt and called the police. I told them in no calm way that something should be done about the icy conditions on my local road as someone might eventually get killed. Our police informed that they were on their way to various critical points in the area with bags of salt to improve the conditions, but it would be some time before they arrived at my particular street corner and …. they hung up. I put a warm jacket on over my Superwoman t-shirt and proceeded to the street below. I met my neighbour from the top floor, she was sitting in her car ready to go. In the meanwhile the damaged cars had disappeared to the happy car hunting grounds so my neighbour thought she had a free road. She tuned the key in the ignition to drive off and I told her stop, with a strong supervoice. She looked at me as if I was less normal than usual. At this moment a car sped around the corner, and yes, kept straight on. If my neighbour had progressed and was waiting at the red light her car, and perhaps her, would have been the next victim. She was speechless, shocked. I was naturally the hero and she was thanking me, kissing my hands on bended knee (little exaggeration) and believed that I must have had the sixth sense to see what could have happened.

I do not see dead people, but sometimes probably see dead cars. I continued emptying my bag of salt on the road and received many strange glances from the cars driving pass. This is the whole truth, it really happened (ok the bit about dead cars was a little exaggerated and it was too cold for a t-shirt).

And now please you lazy people at the WordPress place, think of something new. I have been there and done these prompts before. I will have to start committing crimes to find something interesting to write about. Tell us about the time when you killed a lost daily prompt. Did you leave it to die on the laptop, or did you save it for a later date, in the good old WordPress fashion?