If you could spend the next year as someone radically different from the current “you” — a member of a different species, someone from a different gender or generation, etc. — who would you choose to be?

First of all welcome home Wordys. We were all worried, but now all is OK. We trust you all had a restful holiday and now in your new skins everything will continue as usual with 365 new prompts ready to tempt our writing skills for 2015. 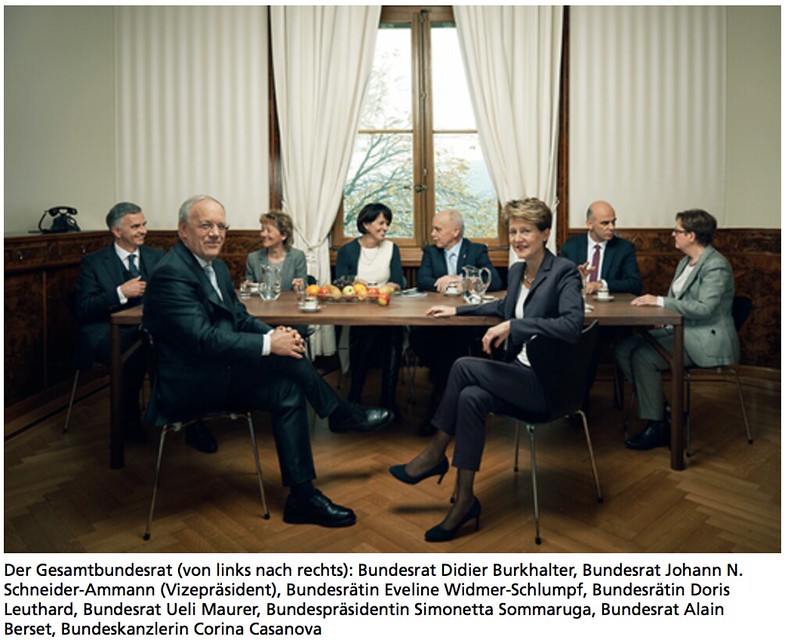 Not only do we get new skins, but a new Swiss Government. Yes, they did it again, they chose a new president (Simonetta Sommaruga right in the middle) and a new vice president (Johann N. Schneider-Amman on the left of the middle). We elect a new government every year, being a direct democracy, although the people usually remain the same unless they die, retire or did a bad job last year. This year it is the same people, but they have been shifted around. They are our seven ministers plus a federal chancellor who does not have much to say, but belongs to the gang and gets a regular wage.

One of these lucky seven is chosen as the new president each year in December. They come from various parties, which is also part of the plan. Two conservatives, two socialists, two liberals and one christian peoples party, or something like that – not sure of the exact translations. It is known as the magic formula. This is the annual class photo and as you can see they are happily talking to each other, getting to know each other, and generally having fun. The real fun begins when parliament opens again, then they are perhaps not always the same opinion, but being a direct democracy we have a little referendum now and again to point them in the right direction.

So enough of politics. Needless to say this photo is not one of mine. I did ask but they told me that they only had official photographers for this annual memory and they did not want their photo to appear in Facebook or a blog. They do not recognise a gifted photographer when they see one.

And now to the personal side of this prompt. I get a new skin, but I am quite happy with the one i have. It turns brown in the sun with no problem and has a few interesting characteristics. My left arm is unique. It was broken twice: first of all the bottom part and a couple of years later the top half. I love my scars, they are admired and a source of conversation.

“Oh, that is a long scar, did you break your arm.”

“Yes I fell over the cat and had a multiple fracture.” I can then progress to explaining about the fifteen screws and metal plate and the bone jigsaw puzzle that the surgeon again pieced together. That is only the top scar. The bottom scar was a clean breakage, but then I can tell them about how they removed the wire two years later, because it was prodding through the skin after I fell again. Oh, the delights of my skin, I would never want to lose it.

Not to mention the scar from my waist downwards in the middle, when they removed my teratoma (my twin that never developed). It is an interesting scar, the surgeon, had to make a detour around the navel. So you see, think how boring I would be without these various details. I nearly forgot, I had a first operation for the teratoma. The was made in a very sensitive part of the anatomy, but let us just say the scar at the back (horizontal) copliments the front scar which is vertical.

Why the skin? iI we were talking about the limbs that creak and groan by every movement, the eyesight that seems to need more magnification as the years go by and my blood which is getting sweeter year by year, that would be an interesting proposition. I would change all of that at once. I do not need to become someone else, I want to remain me and write my daily blogs. This is my eighth year blogging and my Pulitzer Prize moves nearer each year, so I must persevere. Oh, just had a though, perhaps new ears would be an improvement. On the other hand sometimes it is better when you do not hear everything.

I just saw the words “different species” in the prompt description. Now this is something completely different. I always wanted to be a vampire, you are unbeatable, undead, just keep out of the sunlight is all you have to do. The best TV programmes are from dawn to dust, just perfect. I could always get a job at the local blood bank, they have problems finding emergency staff for the night shift.

And there we have it, the first new dynamic challenge for 2015. On this note I would wish all my faithful followers and disciples a very good blogging year. See you all at the daily prompt bar where we can exchange our writing experiences and perhaps a few photos to spice up the blog. They serve quite a good grammatical cocktail there.