We cry for lots of reasons: sadness, pain, fear . . . and happiness. When was the last time you shed tears of joy?

Answer: The last time I did this prompt in 2013 – ok I am a miserable person, especially when I have to do the same thing twice, but I do not have to, so let us retitle the prompt

The revenge of the trees 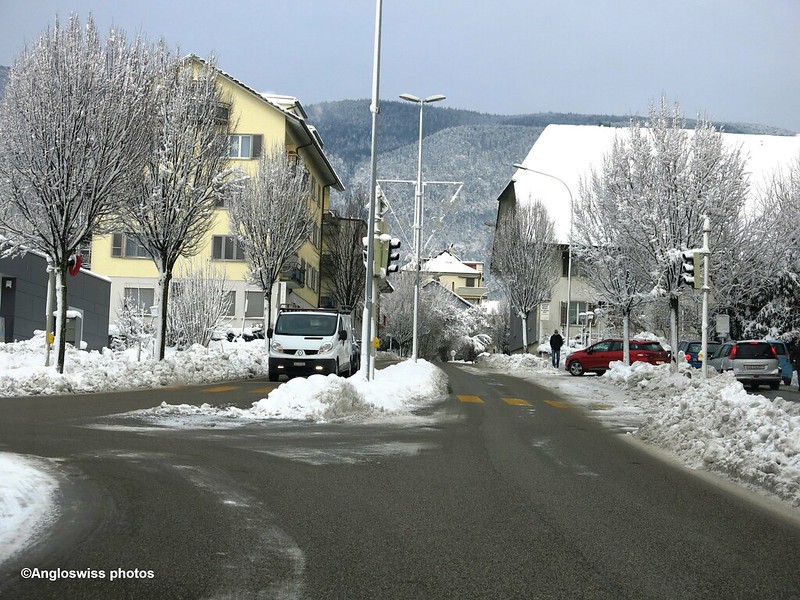 I don’t have anything against trees, I could even be a tree hugger if I had the strength and would not fall down whilst doing it. In winter they are especially pretty when it has snowed. Their branches are weighted down by heavy loads of the frozen white stuff. In some extreme cases the bows break and fall, but today we were safe. Temperatures climbed to above 0°C meaning that snow and ice slowly melted into a liquid state. There is a small problem. The ice lumps on the trees begin to melt at the base where they have warmer contact with the branches. The scene is set.

Today Mr. Swiss and Mrs. Angloswiss discovered that a further hunting expedition in the local supermarket was necessary to kill a few food items for the New Year. We are not making invites and are not having a party. After the evening banquet No. 1 son will be leaving some time in the evening to see in the New Year in the local town of Solothurn, so it will be a romantic evening at home with the Swiss Family Anglowiss, just me and my other half. I noticed we have a mini bottle of something fizzy in the fridge if we manage to stay awake for midnight.

And now to the trees: on the way to the supermarket in the nearby village of Langendorf we admired the view on the way. The sun was shining and it looked really pretty, just like a Christmas card scene and then it happened. We were merrily on our way on the tree lined road and there was a thud on the roof of the car. A few profanities were spoken whilst the next thud was heard and there was a wet damp splodge on the front window of the car. As if to equal things out, there were a few hits on the back window. The snow chunks were slowly melting on the trees and they were falling down on whatever happened to be below. Yes, the trees were aiming at us, they had tasted melted snow perhaps mixed with blood.

“They could break the glass on the widow” said Mr. Swiss, accompanied by a few profanities in Swiss German. I found we should drive on regardless. As Langendorf, our supermarket target village, was uphill at the foot of the Jura mountain, it would not be wise to change our direction and drive in the middle of the road which was tree free. We continued and I am sure the trees were shaking their fisted branches as we passed and the trunks were all bending in our direction. I might have been imagining this. Perhaps I had been watching too many fantasy films, although they were mainly cartoon characters. Now we were being attacked by real live trees, tall trees, strong trees, trees that had something against cars. They were throwing the half melted clumps of snow in our direction and laughing a sort of hollow wooden laugh. The way trees laugh, you know what I mean.I threw a quick glance at their roots to ensure they were remaining in the ground.

Eventually we arrived at our destination, killed a few pieces of meat and gathered some vegetables to go with it, although our concentration was not at its best, thinking about the return journey through the attacking trees. We drove off, knowing it was now just a downhill run on the road through the trees and then Mr. Swiss had a brainwave and for a change I agreed. We often disagree on brainwaves, as my brainwaves are not synchronised to Mr. Swiss brainwaves, otherwise life would be boring. To continue: we would drive home on an alternative route which would be tree free. Many roads lead from Langendorf. The first suggestion from Mr. Swiss was to take the high road. Here I disagreed as I found this would lead to a lower road surrounded by a forest. As we were under attack from the combined tree force I found this not to be such a good idea.

The next choice was agreed upon. We would branch out to the main road (which was tree free) and afterwards take our safe way home. this was perfect until we arrived at the safe way. We had forgotten, there were trees on the safe way. Not so concentrated, but wider and taller. When we reached them it was as if their colleagues had sent a message by leaf or twig to say “they are coming so let them have it”. This time the hits were more spaced out, but double in strength and power. We arrived home safely and the car was dent free more by luck then judgement.

The moral to this would be never trust a tree, especially after a heavy snowfall.

Happy Happy Joy Joy No. 2 – No, definitely not, been there and done it 2 years ago

21 thoughts on “Daily Prompt: Happy Happy Joy Joy No. 2 – No, definitely not, been there and done it 2 years ago”