It was the best of times, it was the worst of times.” — Charles Dickens, A Tale of Two Cities.
When was the last time that sentence accurately described your life? 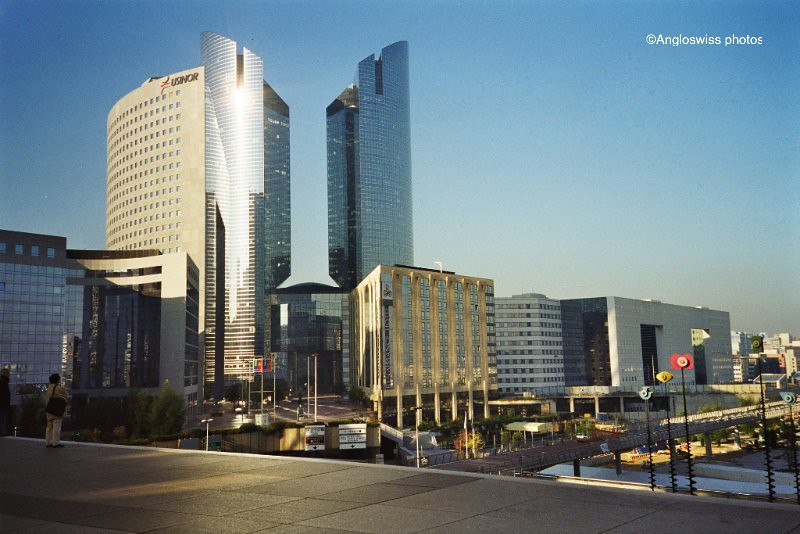 Bonjour WordPress. Aujourd’hui nous sommes à Paris or something like that. I thought as we are enacting A Tale of Two Cities we would begin with a few of my elementary French words and a photo of La Dèfense, the most modern part of Paris. Of course, I can hold a conversation in French, being a Huguenot descendent. Unfortunately my Huguenot ancestors were no longer around in my childhood, so I had to gather my knowledge from the school and my Swiss life. This means that my French remains with a very strong “accent anglais” and some important words are missing.

Mr. Swiss and I and the kids spent a few happy holidays in Paris. It is a five hour TGV train (fast train) journey from Switzerland to Paris. We usually stayed in a hotel near the Eiffel Tower. I spent many happy hours viewing a couple of their famous cemeteries hopping from grave to grave and capturing a few famous graves. Of course we also spent many happy hours visiting the museums and some restaurants on the left bank. Yes, I saw the Mona Lisa and the Venus, although I had to battle my way to the front through the other tourist battalions.

I read “A Tale of Two Cities” although the only quote that remained was when Sidney Carton decided to take the place of Charles Darney at the guillotine. saying “It is a far, far better thing that I do, than I have ever done; it is a far, far better rest that I go to than I have ever known.” Silly man.To go into details, Charles and Sydney resembled each other and the French revolutionaries were fooled. Sidney lost his head and Charles Darney survived. What a hero Sidney was, I am glad WordPress did not choose these famous words, as up to the present day, I cannot say that I ever had the yearning to replace someone at the guillotine or the electric chair or whatever and anyhow, we have no capital punishment in Switzerland, only in wartime.

I am drifting, I know. So the best of times the the worst of times. I was happy when I was put to pasture by the company where I worked. No more rising in the morning and 6 a.m. and no more stressing all day, sending parcels and cases to other countries where I even had problems to spell their names. My daily telephone marathon was finished and the words “just in time” were deleted from my vocabulary. On the other hand, according to the laws of the workforce, I still had two years to go. Two years of a monthly wage, two years of programmed holidays and two years to pay my monthly retirement pension, meaning that I would get the whole enchilada when retired. There you have it, the best and worst of times.

Things were down on the work front, there was a slump and heads rolled, just like Sydney Carton’s head, but there was no Charles Darney to carry on. My head was still attached to my shoulders, but I was no longer needed or wanted, I was too expensive to be kept. It was still a puzzle to me that two weeks after my forced retirement my job and desk were occupied by someone else. Why cry about spilt milk, I was free, rewarded with a 2 year wage from the company before I was officially absorbed into the senior undead regiment. I was eventually rewarded with my regular pension. Even the British government had a bad conscience about my senior status and thanks to a notification I received from the Swiss government, I applied for my english pension. Of course I only worked 2-3 years in england before leaving, but I now monthly receive a little icing on the pension cake, it compensates a little for the money that was stolen from my 2 year too early retirement.