We all have that one eccentric relative who always says and does the strangest things. In your family, who’s that person, and what is it that earned him/her that reputation? 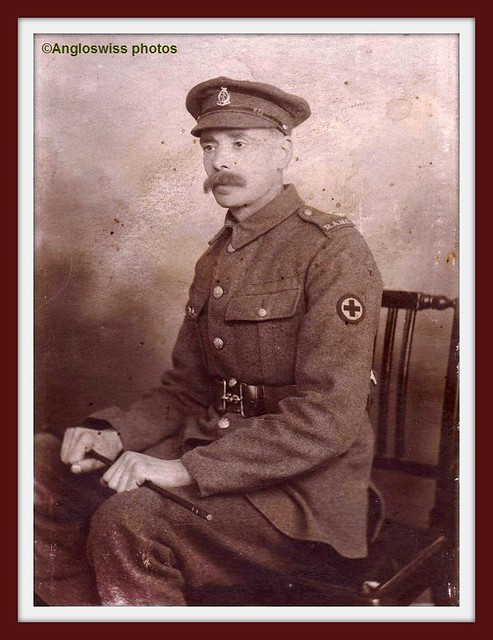 Hello grandad, you look good in your uniform. Yes, taken during World War I somewhere in France I suppose, although you were never sure with grandad, paternal side, what was really going on. I would not really call him eccentric, although he was the first left-handed person I met in the family, my two sons following in his handsteps.

I did know him personally, but have only memories of an elderly gentleman sitting in his chair in the corner of the room, puffing quietly at his pipe. When you was a kid, you were fed with respect for the elderly from your parents. My grandmother, his wife, was a small woman, her hair permanently kept in a hair net and I think it was platted. She was a country lady who grew up in the area of hop growing (for making beer) and at the time when you either worked as a servant in the larger houses, something in the style of Downton Abbey, or on their land.

Yes, she was born in Sissinghurst castle, although no member of the gentry, but the offspring of a land labourer, her father was not even a farmer. To be a farmer you had to own the land you ploughed and her family just dug it over and probably planted turnips in it. She grew up amongst 11 brothers, another 3 or 4 dying in childbirth on the way. She worked in the diary belonging to the landowners and lived with her family in the so-called priest’s house. Not that they were particularly religious, but the house was empty and had room for the growing family as well as a couple of lodgers.

One day a young man, my grandfather, visited his relatives in the same part of the Sussex countryside where my grandmother lived. Whether it was love at first sight, or just the fact of being in the right place at the right moment I do not know, but they were married: a somewhat unlikely pair. My grandmother being a young lady thinking that the world consisted of farms and natural environment and my grandfather, growing up in the East End of London, Bow where the air was then polluted by factory chimney smoke. According to the family records in my possession, after the marriage, my grandmother was still living in her parent’s house in the village of Etchingham. Her many older brothers had married and moved away, to other farms and places. Why she did not live with grandad after the marriage I do not know.

Eventually she left her safe country home and in the face of true love, she moved in with grandad in the East End of London. This was not farmland, but pure industrial surroundings. I am sure she had some sort of cultural shock, but love always finds a way. After bearing four children, in the East End of London, World War 1 broke out and grandad was away in France in the trenches. fighting for his country. He was not exactly a war hero, and served in the medical core. According to my father, his job was collecting the dead soldiers on a lorry, as he was actually too old for service on the front line, and his medical knowledge was not exactly that of a doctor.

So what was so strange about grandad? My father first remembered meeting his father when the war was finished. Grandad knocked at the door. greeted his wife who he had not seen for a few years (tears and hugs I suppose) and my four year old father asked his mum “Who’s that man”. Gran told my dad it was his father and so began a long relationship.

My grandad loved dogs. He had a dog, but his love was more the financial kind. A common hobby of the working class man in the East End of London was to visit the dog races and place a bet. Grandad was also interested in financial investments. My father had one memorable evening when he could not go with his father, so he gave him some money and entrusted him with an investment on a winning dog at the races. The dog won, much to my father’s delight and he was looking forward to receiving his winnings. It was a long wait on that evening/night and eventually grandad arrived home, full of the winning amount, in the shape of alcohol. He was carried along the street by two betting colleagues, singing songs of victory.

My father did not speak to his father the next day. However, grandad was a man of character. It was a memorable evening when he took his wife, and his children (including my dad) for an evening outing. There seemed to be a misunderstanding between my grandfather and another gentleman that looked a little too intensively at my grandmother. Needless to say, grandad was annoyed and punched his rival. Yes, a fight broke out and grandad spent the night in the local prison cell. He was a man of character.

With the years he became a quiet man. I somehow have the feeling that my grandmother took charge. I must say he was a working man. He was a nightwatchman all his life at Lloyds insurance in the city of London. I sometimes wonder if he preferred the night work to being at home, but let us leave that side of things. I do not know.

Actually I was going to tell you about the relations that had that married 4 or 5 times, were in prison for murder, embezzlement and forgery, but I decided no, grandad was more genuine. I also read in the family records that his own father (my great grandfather) committed suicide because he had lost the family fortune by false investments (probably gambling). My dad told me this, but as it happened before I was born, I decided that I would never find the real truth of the matter.