We all seem to insist on how busy, busy, busy we constantly are. Let’s put things in perspective: tell us about the craziest, busiest, most hectic day you’ve had in the past decade. 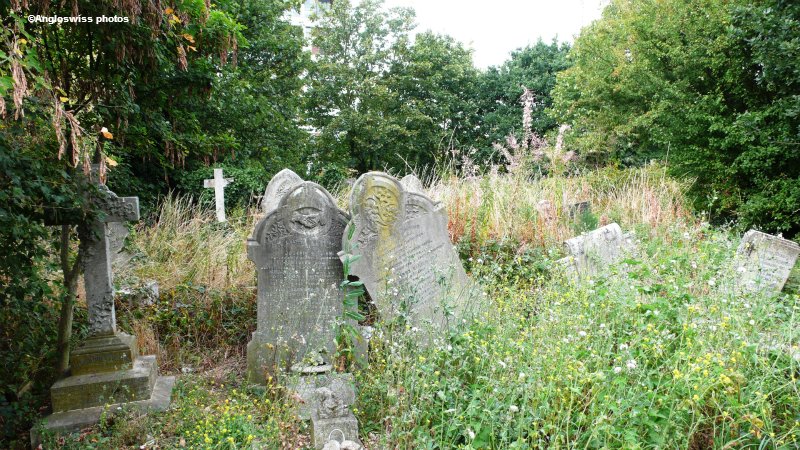 What’s that? Busy, busy, busy? Yes there was a time in the dark ages when it was all happening, now I am too busy keeping my doctor appointments, having my golden oldie midday sleeps and thinking about what to write for my daily prompt. The craziest, busiest day – does not exist, they were an every-day occurrence when I was young and lovely and still belonging to the work force. It was easier to count the days that were without stress, although I think they were the days when I caught up on the stuff that I missed out on because on all the other days I had no time. Now I can take it easy, left the rat race behind me, just me, Mr. Swiss and the two felines and son No. 1 who still belongs to the workforce.

My photo is a typical example of stress. What was the grave digger thinking? Any good looking graveyard has upright stones showing proudly the deceased names and dates. This was a rush job. Just dig a hole, throw them in and cover it up. There was no thought spared to measuring out the ground, making a solid foundation and letting the stone settle. The result you can see, everything tilting and ready to crumble: a typical stress job at the graveyard. Admittedly the graves are from the first half of the 20th century and the graveyard is no longer used. They even dug my family up and removed all the evidence. Grandad is now hovering in an iCloud searching for the remains. It is one of the reasons that I will have a funeral pyre on the banks of the local river and the ashes placed neatly in an urn. Shame I will not be here to blog about it, but I am sure it will be the event of the year.

Now to the serious part of the blog: today was a sort of stress day. Not really for me, but for all the employees at the local supermarket. It was 10% day, where everything is 10% cheaper.

It all began in the parking lot. Mr. Swiss threw me out of the car and told me he would see me inside the hall of shopping. There were no visible parking places free, but I was convinced he would wedge our car into a free space somewhere. I was on my own, found a spare trolley and made a bee line to the computer department.

I had already earmarked my new computer and a few extras to go with it. I got quite pally with one of the guys who works in the computer department. We had a few technical discussions about the world of Apple and its computers, although he admitted that he still works with his Windows machine at home. He mentioned that his next computer will probably be a Mac. He had already written out an official sheet of my requirements as I had already had a few conversations with him. We tied up the deal, I paid with a plastic card and I took the extras home, such as blue tooth mouse and extra external disk. The computer will be arriving within a week which suits me fine. The real stress will begin when I fit it up (although Mr. Swiss fitted his up in half an hour). That is the difference between me and Mr. Swiss, he has all his passwords organised in a place that he knows. I also have them organised, but I forget where I put them.

The actual supermarket was not so much stress. The shoppers were acting quite civilised and there were no fights or arguments about who was there first. Yes, the Swiss are a disciplined, trained folk when it comes to special offers. Eventually our shopping was accomplished. We were tired, but happy and made our way to the car. Oh, that was a little problem, but Mr. Swiss explained that he discovered the last free parking space in the car park. It was quite a special place as it was a single parking place. It seems when they were constructing the car park, they did not know what to do with a leftover of land, so they painted it with a white stripe and gave it a number. That was our own private shopping space today. Oh and our little supermarket mascot cat was also there keeping an eye on things. 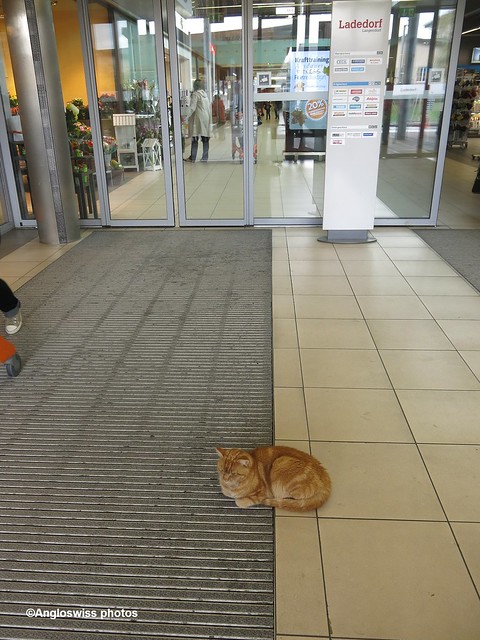