At what age did you realize you were not immortal? How did you react to that discovery? 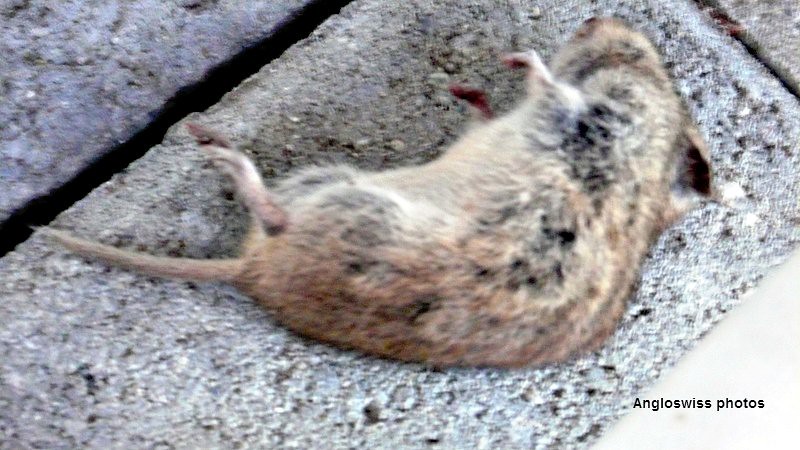 This is a dead mouse. The mouse is not blurred because it was moving, it was my hand shaking with the camera. This mouse was probably completely convinced that he was immortal until he met my cats. Even then the thought probably did not cross his mousey mind that it was be the last encounter of his life.  My felines were proud (I cannot remember which one it was) and brought the mouse to show me. I picked it up by using an inverted small plastic bag, and it went to the happy mouse hunting grounds.

What a happy go lucky prompt we have today, but it is food for thought I suppose. Was it the first time when I killed a fly, leaving his squashed remains on the window pane or was it on one of my early childhood walks over the cemetery? Mum made a habit of taking me to the cemetery when I was a kid. We visited a large grave, containing five departed, the last being my maternal grandmother who I never really knew. I do not think that mum knew who else was in the grave, it was all before her time, but the names helped me when I was exploring for my family tree. There was still room for one apparently and that was going to be my grandfather, although he stayed around for a few years, being almost 90 when he decided to fill up the grave. I often wondered if he knew that his place was secure. Growing up in such earthly circumstances it never crossed my mind that I might still be here when Armageddon arrived. By the first shower of frogs and the arrival of the four horsemen of the apolocalypse my time would come in any case.

Oh, come on, there was never philosophical discussions in our family about life and death, it just happened and I grew up with it. It never entered my mind to be immortal; I just got on with life.

Living in Switzerland casts a different outlook on existing or not going to the next step on the journey. I remember when I moved into the Swiss way of life and we had a daily Swiss newspaper. There were always 2-3 pages included (according to the death toll) with large black square outlined boxes showing names and dates of life spans. Details were given when and where the funeral was taking place, or already had taken place (those that wished to get it done and done with without a big party) and the near relatives were neatly listed at the bottom. No. you could not get away with being immortal in Switzerland, everyone knew when you were gone. “Did you see xxxx has passed away?” “Yes, there was an obituary in the newspaper, he was older/younger than I thought.” When the daily newspaper arrives in the post box you do not study the headlines, you turn to the last pages and see who is no longer amongst us.

There is a disturbing detail in this whole thing about “let’s read the obituaries”. I am now 68 years old, not exactly fit, but still writing the daily prompt and looking forward to writing many daily prompts. One day there will no longer be a daily prompt written by me. Do not be disappointed, there is always someone else that will write a daily prompt and Wordy, being immortal, will let you know I am sure. Not that Wordy was asked, but he just needs a touch of oil and a few new screws and he is as good as new.

I have also noticed, much to my regret, that the birth years of the deceased in these black surrounded boxes in the newspaper, are approaching mine. Ok, we all have to go one day, but I do not have to have a daily reminder. I think I will stop reading the newspaper. Mr. Swiss has just returned from his daily afternoon walk, guess where he was? Yes, he took a walk over the cemetery and was annoyed to notice that the gardener had not yet replaced the flowers on the grave for the Winter season. It seems the gardener is probably overworked at the moment, everyone wants their grave to look good for Winter, especially as Halloween is approaching. You have to keep the spirits happy.

On this happy note I will leave you and hope to return tomorrow with some more words of wisdom.