You get to spend a day inside your favorite movie. Tell us which one it is — and what happens to you while you’re there. 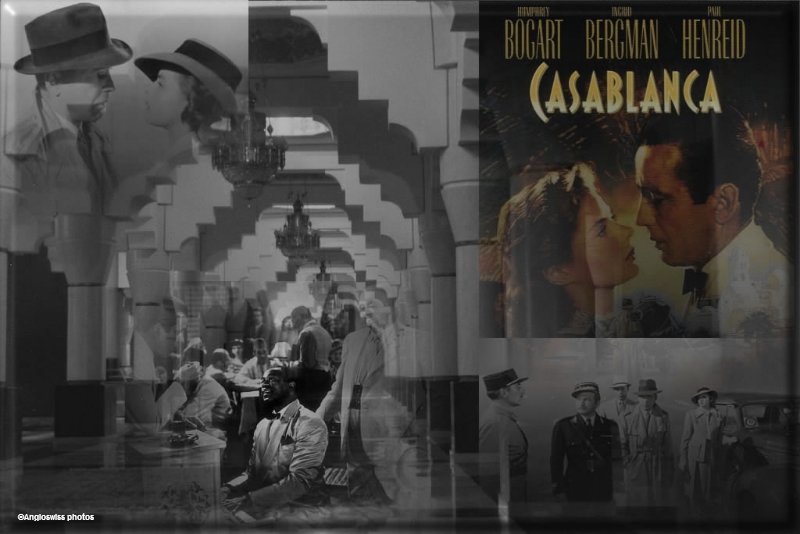 “Hello Mrs. Angloswiss, are you ready for the big day shooting for Casablanca?”

“I certainly am Wordy, how do you think I look. I really don’t want to disappoint all those stars, especially Humphrey Bogart.”

“A little too much colour Mrs. Angloswiss. It is a black and white film, they didn’t do colour in those days. That red dress will look a little too dark grey, and the shoes to match will not work. Try something in black and white.

“Err Wordy, I thought this would be my big break. And what about a Bruce Willis or Brad Pitt film, they were the first on my list. You know at the end when the romance arrives and the last scene shows me in their arms, waiting to be carried away.”

“We had a small problem Mrs. Angloswiss. In the Bruce Willis films there are not many female parts, and they are usually killed off in the first part of the picture and WordPress cannot afford the life insurance, you know funeral costs etc. Only the toughest survive and your grey hair might not be so good for the part. Bruce Willis shaved his hair off, so it doesn’t notice so much. But with you …..”

“Wordy are you suggesting I would have to shave my hair to get a part in a Bruce Willis film. I was thinking on the lines of the role of his ex-wife in Die Hard. She was a heroine.”

“So I have to make do with Fight Club?”

“Not exactly. Both Jennifer Anniston and Angelina Jolie raised objections to having you as a main leading female part, although they gave their permission for a role as a female boxing champion. With a little make-up for the bruises and scars it would work.”

“Wordy, if you continue, I will show you how good a punch I can land on your nose.”

“Stay cool Mrs. Angloswiss. No problem, Casablanca, your third choice,  is OK, The copyrights on the film were exhausted some time ago and there is no-one left to object, so step this way.”

“You mean I can take the part that Ingrid Bergman played: Rick’s girlfriend and faithful companion. I can see Rick gently placing his hand under my chin and raising it so that our eyes meet and saying “Here’s looking at you kid”. Oh my legs feel quite shaky at the thought of it.”

“Not exactly Mrs Angloswiss, we were thinking more in the way of playing the role of Ricks’s previous girlfriend, Yvonne.”

“She said a few lines in the film, it is quite an important part.”

“But she was the one that was drunk most of the time and a fight started.”

“We will give you a bottle of whisky before the filming.”

“I can play “As Time goes By” on the piano, I could be the one playing when Rick says “Play it again”.

“Mrs. Angloswiss, you are not the type meant for that role.

Just follow me Mrs. Angloswiss for your big break”

What chance did I have. WordPress were paying (at least I didn’t have to wear a t-shirt for the part) and were transporting me to 1942 when the film was made (I wasn’t even born then). Things went quite well actually, although I got a little wet in the last scene when Claude Rains and Humphrey Bogart were saying good-by. It was raining and I had the job of holiding the umbrella over Humphrey Bogart (although they removed that from the film).

I should have chosed The Gladiator, Russell Crowe looked quite good in the leading role, but knowing my luck I would have been placed as a female gladiator, being mauled to death by a lion, although perhaps Russell might have taken me in his arms and closed my eyes in a last gesture.

Daily Prompt: Fourth Wall – Bruce Willis, Brad Pitt or Humphrey Bogart? there are so many to choose from