A stranger knocks on your door, asking for directions from your home to the closest gas station (or café, or library. Your pick!). Instead of the fastest and shortest route, give him/her the one involving the most fun detours. 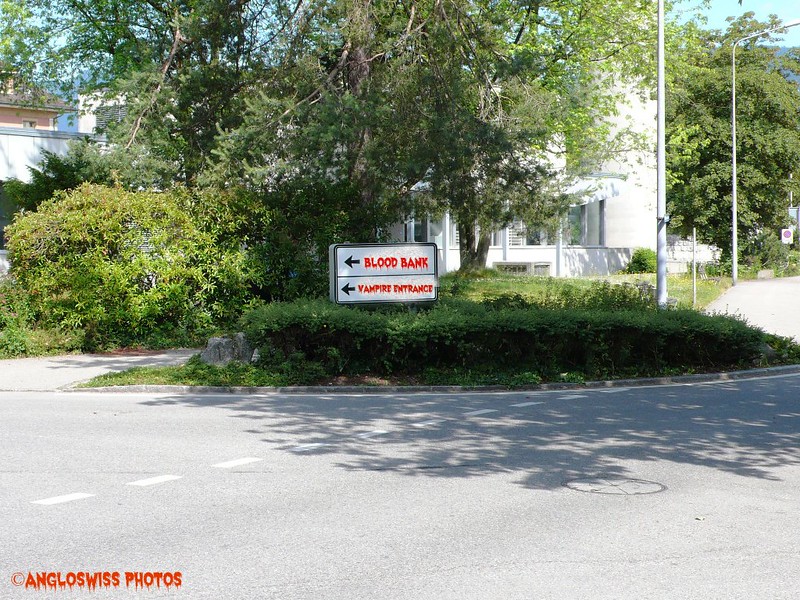 `Twas early in the evening when a knock came at my door. It would have been a dark night, had it not been for a full blood moon. I looked through the peep hole. I do not open doors in the evening when I am not expecting visitors. I saw nothing, the light had not been activated and it was dark, black as Newgate’s knocker as my dear old mum used to say. It was one of her favourite sayings, comparing the darkness to the door knocker of the famous London prison, where she met her end.

Shall I open the door? I decided to take the risk. What could possibly happen and there would be enough light streaming through the windows from the moon, be it with a red tinge. Did I hear the caw of a raven, did I feel a cold shiver creep along my spine. No, but I always had a low temperature.

I decided to open the door.

“Who goes there?” I called.

“Oh mistress, it is only I, a poor lost traveller searching for the right path.”

I took a step nearer. A figure stood at the door wearing a long black cloak. Luckily his teeth were long and shiny, especially the fangs at the top corners of his mouth which shed some light on his appearance.

“I am lost” he said “can you tell me where the nearest blood bank is?”

I felt immediately sorry for this night visitor: being lost on a cold night was bad enough, but not knowing where the local blood bank is, is a fate not to be envied.

“But you look so weary and you must be feeling cold. Come in and warm yourself. Would you like a glass of spirits as refreshment before you go on your way.”

The figure seemed to be watching me from his eyes which had an accompanying red shimmer, or was it the reflection from the blood moon.

“Thank you mistress, very kind. Perhaps a bloody Mary to warm my heart. Heart? No forget it I do not have one. You are inviting me in? You have made me so happy. It is not everyone that invites me into their home.”

He almost flew through the door and got quite close. I decided to remain polite, even if he did have a sort of curious decaying smell about him.

“I always invite lost strangers into my chambers. What more can I do for you?”

And then we were disturbed. I was not disturbed, but my pet werewolf Cuddles was awakened by the noise. He was howling again, prompted by the moonlight. He arrived and sniffed around the visitor, licking the visitor’s fingers. Cuddles was a large werewolf, so when he pounced on the visitor knocking him down I was annoyed.

“Cuddles, this man is lost, he asked me to help him. Stop bothering him and take his finger out of your mouth, you do not know where it has been. I am so sorry Mr. ermmmm.”

“Just call me Vlad. What a sweet little werewolf you have. Come Cuddles let me stroke your nose.”

“Mr. Vlad I would be careful, he is very sensitive about having his nose touched.”

Cuddles pulled back his jaws showing his nicely sharpened teeth. It was the day when I had taken him to the vets to have his claws cut and usually the vet combines it with teeth sharpening. It saves money to have both jobs done at the same time. And then Cuddles began to rub his ears on the visitor’s cloak.”

“Oh that’s OK” said my visitor Vlad. I quite like dogs, especially the werewolf breed and they love me.. I have a way with werewolves. Perhaps he could show me the way to the blood bank. Would you like to accompany us?”

I decided yes, it was time for a moonlight excursion, not every day a blood moon appears.

“I don’t have a car and it is quite a distance to walk. I only have my broomstick.”

“No problem mistress. You can mount your broomstick and I will fly next to you.”

“Fine, it is only five minutes as the vampire/witch flies and Cuddles will be keeping watch on the path.”

It is not every day that I have such a nice visitor. We had fun and I pointed out the various graves as we flew over the cemetery. Eventually we arrived at the blood bank in the local hospital. Mr. Vlad was so happy, he was thirsty. Even Cuddles managed to catch a few rats on the way. I had already set up a cauldron at home and the frog’s tongues and asparagus were already cooking in the spawn liquid. My mouth was watering already.

Of course I invited Mr. Vlad back to my place afterwards and he stayed a few days. Luckily I had a second hand coffin in the garden shed where he could sleep. I always knew it would come in handy.