From your musical tastes to your political views, were you ever way ahead of the rest of us, adopting the new and the emerging before everyone else? 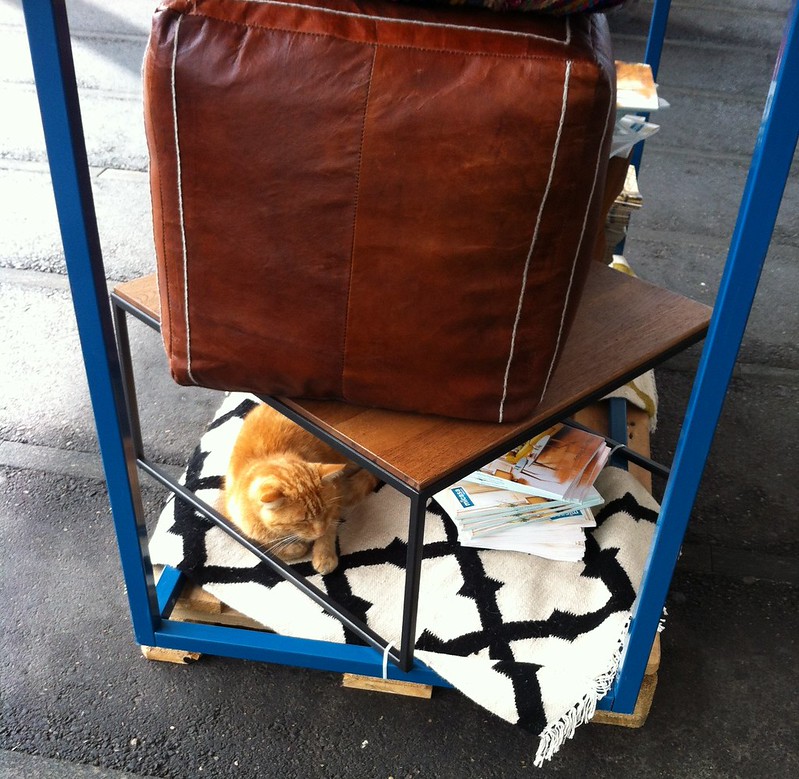 Find the cat. This is cat is being very avant garde, sitting on a stand at the entrance of the local supermarket. Yes, she is ahead of all the other cats. She even visits the restaurant now and again to see if there are any free choices. This morning I met her as she was leaving the supermarket. She was waiting behind the automatic door. As the doors opened she was away, walking leisurely along the path leading to the outside part of the restaurant where there might be a ham sandwich remainder laying on the ground.

And now to me: I was always way ahead of everyone. After entering the world, my first two bottom teeth appeared after two weeks. With six weeks I had six teeth. I could not wait to chew my first steak. I was the third tallest in my school class, looking over the heads of most of the others. This is all very physical, but my intellectual progress was just as impressive. I could read before going to school. I had not yet written my first blog, but at the time computers did not exist. My talent was confined to the usage of a small blackboard and chalk. I was born too early. If I had been laying in the bed next to Bill Gates in the maternity station I would have done it first. I would not have developed just windows, but the doors and roof as well.

The scene is set. Mr. Swiss is watching a police drama on the TV. The husband has been killed, his body is dragged from a river, or perhaps shot. Whilst Mr. Swiss is concentrating on the developments of the story, I am watching the excitement from the corner of my eye, being concentrated in a book I am reading. Now and again I watch the progress. It is all very suspense packed. Who did it? Then I speak. “I am sure it was the neighbour”. The neighbour” says Mr. Swiss with astonishment. “But the neighbour had an alibi.” “The alibi is false, he was blackmailing the guy that gave him the alibi. He was having an affair with the wife and they planned the murder together.” I continue reading my book and Mr. Swiss watched this enthralling “who done it” until the end. Who actually did it you as asking? Of course it was the neighbour. I am always one step ahead. I would have been a really successful criminal; I would have got away with murder. Mr. Swiss finds it is not fun to watch an exciting TV film if I am also watching: one of the reasons why I keep my nose in a Kindle/iPad app/book.

TV thrillers are boring; I always know the solution to the story. Reading a book is more complicated: one of the reasons I prefer to read. You never really know how the storyline develops and if it is a good author, surprises happen on the way.

I am not so much into modern music, but there I must admire son No. 2. I remember a group called Nirvana. One of their albums, Nevermind, showed a swimming baby on the cover (in the good old CD days when you knew what you was getting for the money). I was fascinated by the cover and asked who it was. “It’s Nirvana” was the answer. I thought my son had become a disciple of Indian mysticism, but it was a modern musical group. They were then at the beginning of their climb to fame but he had bought the record before most of the others, which was to become a best seller. Not really my taste, I was still hovering around with Supertramp, being a middle aged mum, but my kids kept me in the picture. I do not think I ever listened to the record, but it must have been good. According to Wikipedia their style was grunge, alternative rock. The things we learn from our kids.

As far as politics are concerned I have always been a step ahead, but have never been given the chance to prove it. The politicians think they know it all better. On the other hand you can never judge the political scenery of a country unless you live there. If I was president of Switzerland I would ……… – forget it. “They do what they want in any case” was one of my late mother-in-laws favourite quotes.

Am I a step ahead of the Daily Prompt? Will I be able to tell you all what it will be tomorrow? What about “ready, set, done”. Now that would really be avant garde if my prediction is correct. So start thinking about it now, you only have ten minutes to write. Make sure it is full of suspense until the end. I think I will rob a bank this evening, then I would have something interesting to write about tomorrow.

Daily Prompt: Avant Garde: Always be one step ahead