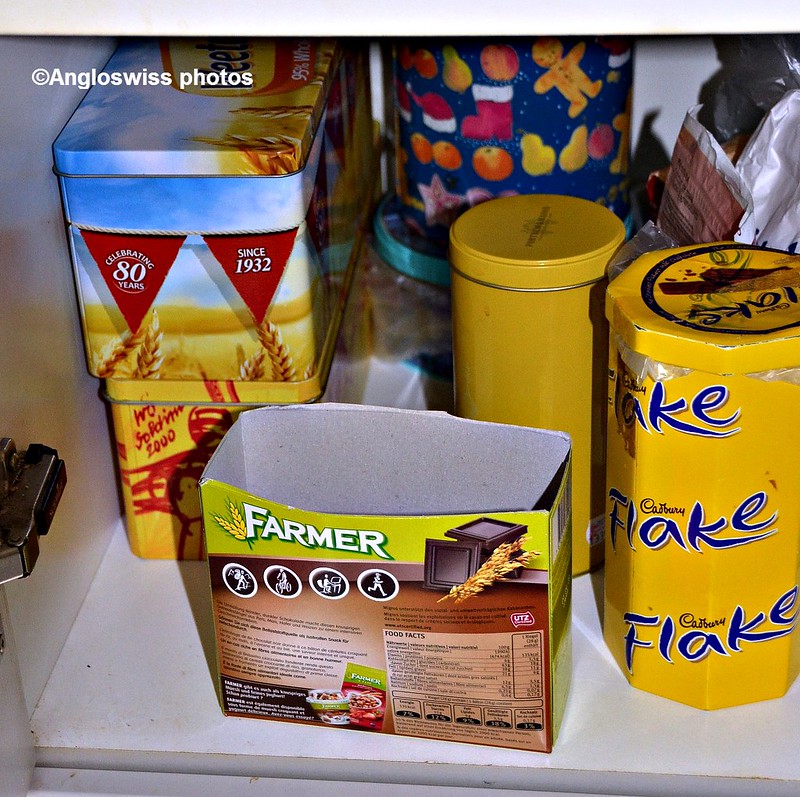 This is the place where we keep our cookies. Actually I say biscuits being english, but cookie is universal. We all know what I mean. There are various types. Some have jam (jello?), some are filled with cream and there are the plain cookies with just sugar. You can have flavoured cookies with ginger, vanilla, lemon, everything the heart/stomach desires. They arrive in various shapes: round, square, hearts, stars and even animal form.

For the cookie fan, the addicted, this can be irresistible. I must admit I do like the odd cookie now and again, although my diabetes tells me to leave the finger from such cravings. We keep the various sorts of cookies in different tins. It is hygienic and it is a perfect organisation. As you can see we have many tins. I would mention that on the left there are two large square tins. The top tin contains 2-3 packets of various cookies, the bottom tin is reserved for salted delicacies such as nuts and pretzel sticks.

You are asking why so many various tins of cookies? I am also asking the same. They seem to multiply on their own. Of course, they are sold at the local supermarket. I do not shop on my own, Mr. Swiss is my faithful companion. He is a great help when choosing the items I want to buy. I rarely buy cookies, perhaps once a month but when I arrive at the cash desk there always seems to be a packet of cookies in the basket, as if by ghost hand. How do they arrive do we have a cookie monster in the family?

This week I decided to tidy the cookie section of the cupboard. Admittedly two tins were just the remainders: two soft cookies and a pile of crumbs. I disposed of these. I reduced the tins and now we have an organised cookie selection. Mr. Swiss went on a supermarket hunting trip on his own. this week, We needed something we had forgot and he fetched it plus a rather interesting appetising packet of, yes, cookies. The were heart shaped, made of gingerbread with a filling. They now occupy the empty tin. Will they be eaten, will they be used, will the tin be emptied? Life in the Angloswiss home is full of surprises and yes, suspense.

Time to confess: tell us about a time when you used a word whose meaning you didn’t actually know (or were very wrong about, in retrospect). 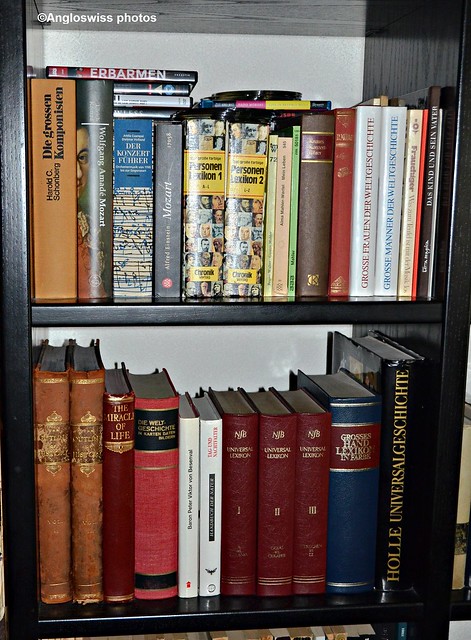 Here we have a small section of our bookcase with the various Lexika (Lexikon singular, or probably dictionary – I really do not know, it is a German word) There we have the problem. “Tell us about a time”  which happens daily to me. Before I begin to write I have the Leo tab open, to assist with my bilingual brain. I live in a country where English is not one of the basic languages, there are a few others, and I need Leo to help as I tend to forget the English expression for a German phrase. My brain says write this but my brain is thinking in German, so I consult Leo, any suggestion for English and Leo gives me a choice.

Let us begin at the beginning. I am sure when the Pilgrim Fathers set sail in the Mayflower to settle in a place called America, they forgot to take their dictionaries with them. They re-invented the English language. I do not procrastinate, I postpone. I do not eat cookies I eat biscuits and if I travel to the cellar I take the lift. We do not have an elevator. I like to watch a film in the cinema. Admittedly the film is moving, but I do not tell everyone I am going to the movies. I have a garden, a yard is concrete with no flowers. There we have it, the confusion is complete. I cannot speak to the inhabitants of my chosen country in English as they speak German (Swiss german) and if I visit the States, they do not use the same vocabulary as I do.

Of course I understand the Americans, they even find my accent quaint.  I can follow the sense of all the Hollywood movies if they do not speak dialect. I once saw a film where they spoke the Louisiana thing and I had problems knowing what it was all about. I believe it was a film with Dennis Quaid The Big Easy.

The Americans have their Webster for finding the meaning of words, we English have the Oxford dictionary where the meanings of the words are different to those in the Webster. The Germans have so many problems, they have something called a “Duden” explaining the right word to use at the right time. Every home, every office and every school has a copy. The Germans live with the Duden. I am sure every German baby is born with the Duden in his cot. If you ask a grammatical question the answer will be “just a minute I will see what the Duden says”. Luckily every year it is re-issued. They have to keep up with the language. If the Duden says yes, then it is OK to use the word.

I often receive a prompt from our t-shirted WordPress colleagues. Before I begin to write I have to check what our Wordy friends are talking about to get the right end of the thread.

As far as knowing the meaning of the words I am a translation machine at home if the TV is running on the English programme. One of my favourites, my only favourite, is a soap called Eastenders, based on the happenings of various dubious families in the East End of London. Of course they are mainly speaking cockney, my original dialect and Mr. Swiss has also become a fan of this programme. However, when I am engrossed in a situation which is full of suspense there can be a problem. Perhaps the murderer is about to be revealed and someone says “What did he say?”. Of course I oblige, and miss who the murderer was, because I was translating. There might be a lively conversation in the local pub where everything happens. I miss most of the conversation because I am still translating what happened in the last scene: not that Mr. Swiss does not understand English, he understands it perfectly, better than I do sometimes, but his English teacher never taught the grammatical details of cockney.

If there is a problem in the programme the answer from an actor is usually “I’ll sort it”. That is not confusing, or is it? If there is a conflict between two parties, there are never bad feelings, after all “it’s family”. Yes we have a strong sense of family in the East End of London, although in this TV programme it has happened that a brother has had an affair with his brother’s wife, but that is probably the meaning of “keeping it in the family”.

I fink it’s time to go, ovverwise I’ll never be finished wiv this bit of blog. Look after yerselves and be careful if you ‘ave to go down the apples n pears or the frog n toad, keep your bins open and don’t fall. See ya tomorrow I ‘ope.

Daily Prompt: Dictionary, Shmictionary – Time to ‘ave a dekker at the daily prompt