10 minutes. You and your keyboard (or smartphone. Or tablet. Or pen and paper). No pauses, no edits, no looking back: it’s free-write time!

Just a few words first of all. I write this daily prompt because I want to have fun. If I wanted to time what I write, it would remove any fun from my efforts. I live a quiet life, some might say boring. I pep my life up with observations. This week I decided to clean out the kitchen cupboard and found 8 packets of biscuits, partially eaten. The last packet was bought on the same day and it mysteriously arrived in my shopping trolley by ghost hand, at least not from mine. I do not eat biscuits very often. I am more a chocolate person. This is not the theme of my blog yet. I have something else.

So what I want to say is you can stuff your ready, set, done themes where the computer bytes do not shine. I don’t want it. And here is an episode from my daily boring life and I refuse to set my clock to 10 minutes. I am sure that Edgar Allen Poe did not write with a clock next to his writing pad. It is the truth, the whole truth, but I did not send the letter. Mr. Swiss had a few personal words with the postman. 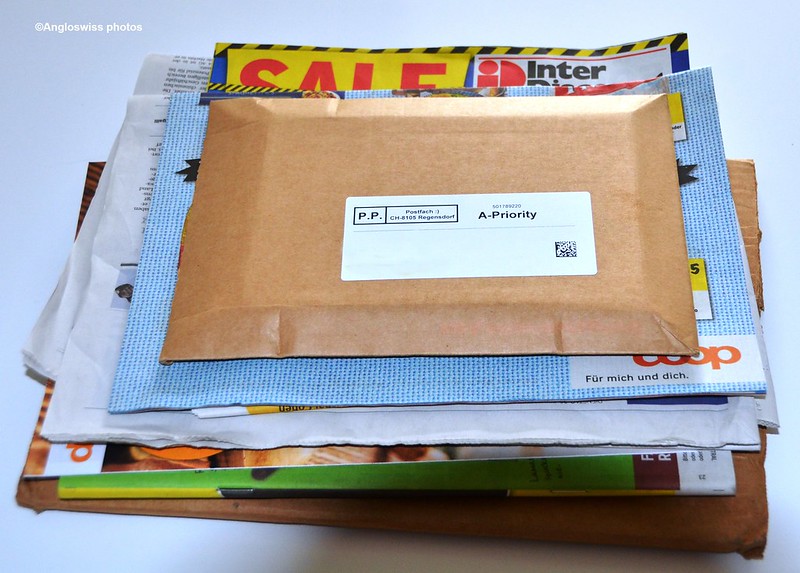 This morning I was alone at home, Mr. Swiss was in town. I did my housewife work and realised it was time to empty the mail box. Our mail box is locked with a key to ensure that no-one can take my private mail.

I arrived at the mailbox, opened its door: yes it is very Swiss and tidy. The top section contains letters. The bottom half was empty, known as the milk box from the olden days when the milk was delivered.

To continue: I put the key in the lock and turned it and ….. nothing happened. I know these mailbox locks are not always the best quality so I tried again and could not move the key. I then had a scientific brilliant brainwave. I put the key quickly in my ice box in the kitchen, knowing that cold makes metal shrink. I replaced the key in mailbox but nothing happened. It was blocked. Perhaps the lock schrunk as well from the coldness of the key.

I had another brilliant idea. I managed to lift the flap manually which you use for inserting the mail and saw there was a small cardboard envelope at the top. I  hooked the cardboard between two fingers and pulled it out through the slit, thinking that the remaining post would now have room to breathe and move. Unfortunately there was quite too much remaining post to make this possible, but I continued undaunted. I removed a few advertising leaflets which were covering the newspaper. I decided to try the key again. An open letter box is easier for removing the post. Unfortunately the mail box was still blocked and the key could not be turned. Eventually I removed the newspaper. It had divided itself into two parts, but the pages were complete, although somewhat creased with a few minor tears at the edges.

I was pleased to see that the letter box was almost empty with the exception of a large cardboard envelope which was very stubborn. It refused to move. My fingers were now quite numb, but I continued regardless. Somehow I manage to grip the corner of this oversized cardboard and pulled. I broke off a finger nail, but this was not a problem, it was not painted or manicured and I eventually removed the object in question. Lo and behold I could now move the key and open the letter box. It was a little late, as the letter box was now empty.

I realised that the last object I removed, the cardboard envelope, was a few millimetres larger in width and length than the letter box. This was the culprit. It had been somehow wedged into the letter box with no room to breathe.

This is by no means a complaint, just perhaps a small hint that for future deliveries of cardboard packed letters, even catalogues, it would be advisable to put these in the larger space reserved for the milk. This would protect my fingers from further strain and would have a positive effect on my nerves

Thanking you for your consideration in this matter and wishing you a successful posting journey.